Back to the index
Related:

Philips Compact Disc Digital Audio represent an outstanding advance in audio technology. It enables standards of reproduction, previously unattainable through traditional recording, mastering, and replication methods, to become a reality. This has been made possible through the development of techniques and equipment which enable audio information to be converted into a digital format, and transferred by optical means onto a disc. To achieve this breakthrough, Philips has used what is possibly today's most advanced tool...the laser...both in the Compact Disc Player itself and also in the mastering process. In addition, our extensive experience in audio technology, plus Philips worldwide research and development facilities have been combined to realise our aim for the optimum in sound reproduction... 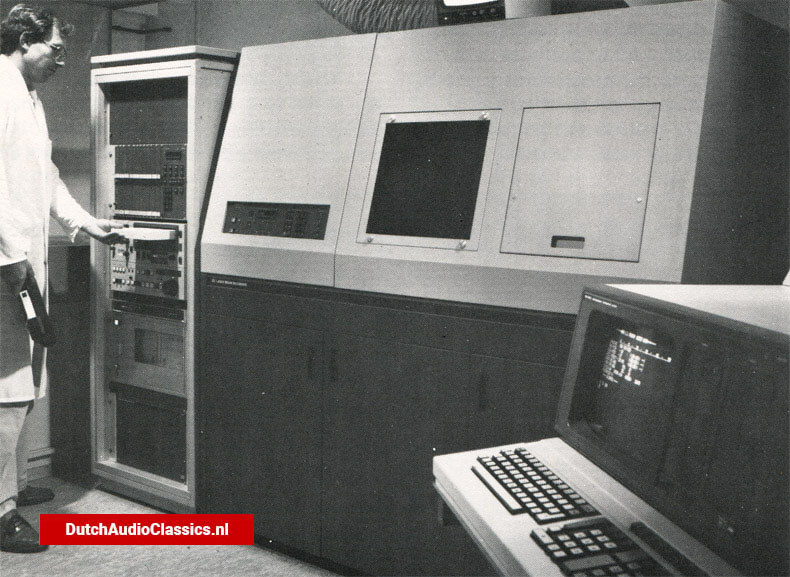 The Philips LHH0400 CD-Master Recording System provides a reliable and efficient way of exposing a CD-Resist Master Disc, according to the standardized CD-Disc Master format.

The system comprises a Subcode Processor/Editor, an Encoder, a Laster Beam Recorder, a System Controller and accessories including a focus monitor, an SMPTE-time code reader, a 19" rack mounting system, and all necessary cables.

The source of all program and coding information required for the CD-Master Recording System, is considered to be the standard CD-Tape Master. This is the carrier of digital audio, and subcode information in form of cues and an SMPTE-time code. A digital tape recorded is used to access the CD-Tape Master. In addition, generating and editing of cue code data can be performed by the Subcode Processor/Editor.

The subcode information, recorded on the CD-Tape Master in form of cues, is converted to the standard CD-subcode format by the Subcode Processor/Editor. In this conversion the subcode ues are related to the time code from the tape master, decoding of which is performed by the SMPTE-time code reader. The subcode and the digital audio are fed into the CD-Encoder, the data bit stream being synchronised by the 44.1kHz sampling clock. The Encoder carries out multiplexing, CIRC encoding and Eight-to-Fourteen Modulation (EFM), finally resulting in the channel bit stream. 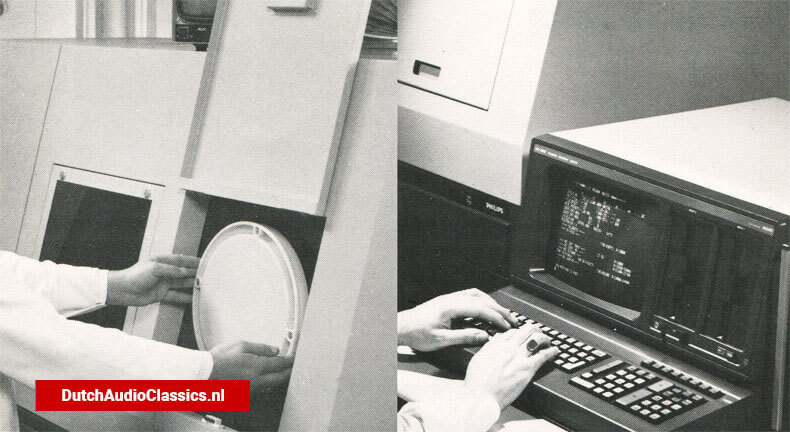 The channel bit stream from the Encoder passes to an acousto-optical modulator in the CD-Laser Beam Recorder. The laser beam is modulated, and focussed by means of an objective lens system, onto the photo-sensitive coating of the CD-Resist Master Disc. An argon-ion laser, wavelength 457.9nm(blue), working in single line TEMoo mode is used for recording.
Focussing onto the CD-Resist Master Disc is assured by means of a servo-controlled motion of the objective lens system. Two focussing systems are applied. A primary system using a infra-red semiconductor laser in the skew-beam method, and a secondary system, which used part of the reflected blue light. By these means focussing is possible even when no recording is made (shutter closed), and also where there are drop-outs that would normally disturb the reflected blue light during recording. Focus accuracy and recoding-spot quality can be confirmed on the focus monitor.
The information is recorded in a spiral track, extending from a minimum inner radius to a maximum outer radius. The track pitch is the result of the rotational velocity of the CD-Resist Master Disc together with the linear speed of a sledge carrying the focussing optics. To obtain smooth frictionlesss motion, air bearings are used in both the rotational and the linear drive system. Stable and sophisticated control systems are provided to ensure the specified track pitch accuracy.

The Philips Compact Disc Process has been designed as an automatic "hands-off" operation. This, together with the built-in dust-filtering facilites in the equipment, not only has a positive influence on the quality but also improves to a large extent, the overall process yield by minimising manual contact with the disc. The CD-Resist Master Disc, diameter 240mm and 5.4mm thick, has in its centra a metal attachment to clamp the disc by means of an electro-magnetic system, onto the drive spindle of the equipment used in the various steps throughout the whole process.
The CD-Resist-Master Disc is delivered in a specially designed airtight cartridge. This enables the use of a disc exchange mechanism.

Once the operator has placed the cartridge in position, the disc is automatically withdrawn, and as soon as the recording has been finished, returned to the cartridge.

The recording process is fully automated under remote control of the System Controller. The latter is a microprocessor based system, that interfaces via an IEC-625 bus with the Subcode Processor/Editor, Encoder, and Laser Beam Recorder.
In addition, a separate microprocessor in the Laser Beam Recorded communicates with the functional recorded units via a standard 8085-bus.
The System Controller coordinates the activities of the system parts and provides input and monitoring facilities. The program for recording the standardized CD-Disc Master format is stored on a follpy disc. Program for special formats, are available on request.

The high density of the recorded information requires a vibration-free arrangement of the active recorder components. All optical and mechanical parts are therefore mounted on a heavy granite baseplate which is supported by a pneumatic vibration isolation system. This allows installation of the Laser Beam Recorder without excessive requirements on floor-vibrations.
The Laser Beam Recorder has its own built-in dust filtering system.
Recording and disc-exchange takes place in an air-cleanliness class 100, according to Federal Standard 209 b. Installation in a cleanroom environment with an air-cleanliness class 100.000 is thereby permissable.
The Philips LHH0400 CD-Master Recording System has been designed for trouble free operation during at least 2000 hours. The recording laser is guaranteed to run in the required high-performance mode for at least 1000 hours. Alignment of the optical configuration after replacement or maintenance of the laser, is facilitated by computer controlled beam positioning facilities.
Maintenance and servicing of the CD-Master Recording System are simplified by the ease of access to all units and their modular electronics. 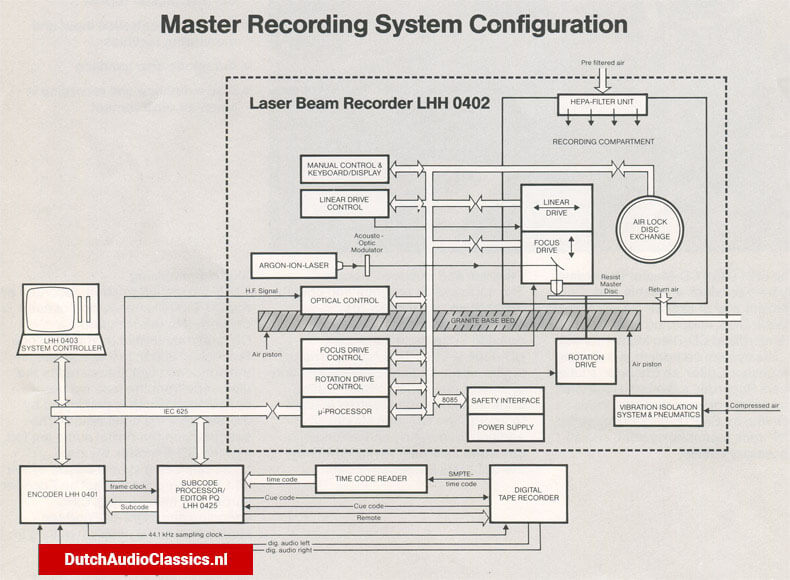 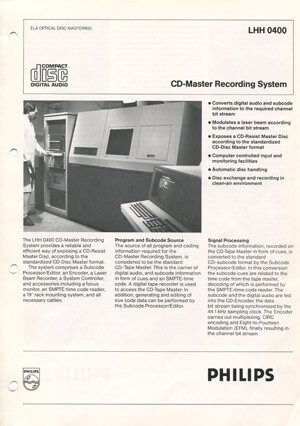