The ISP Sound Enhancer consists of two versions: a consumer version and a professional version. The consumer version costs 1900 dollar, the professional one is about 800 dollar more expensive and is housed in a 19-inch housing with better buttons and balanced inputs and outputs. The options of both devices are the same. 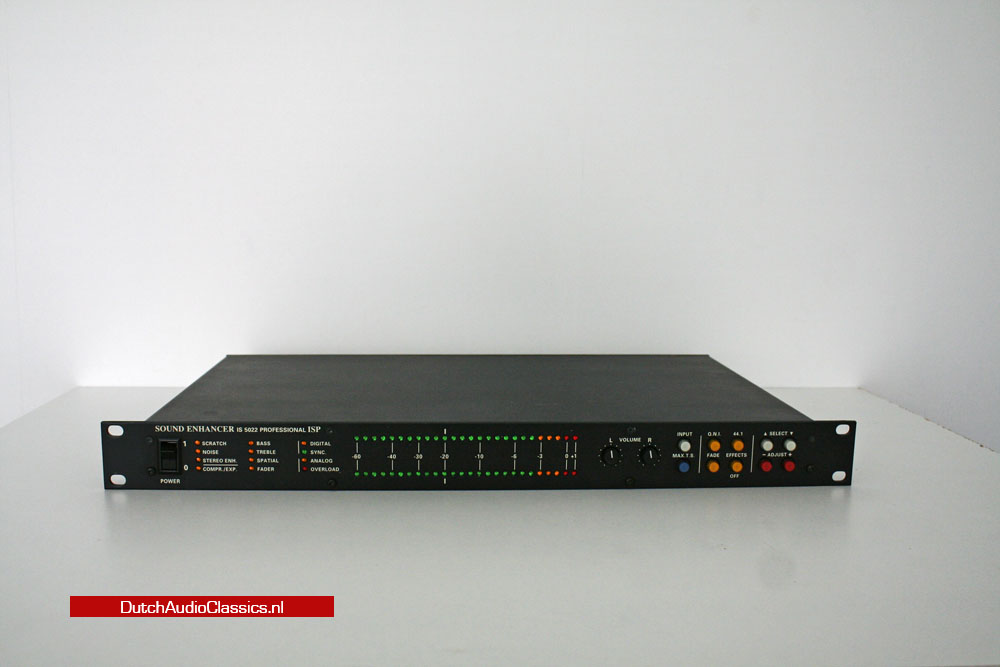 The front of the IS5022 consists of LEDs that indicate which functions are switched on or off. There are 15 switchable options - ranging from scratch suppression, stereo simulation for mono recording, compression / expansion to noise reduction and tone control - all of which are realized in the digital domain.

The middle part of the front consists of two LED bars with a scale of 0 to 60 dB. The control keys are located on the right. The Sound Enhancer has an external transformer.

Why would people want to buy such a device? The obvious reason must be found in the fact that we are getting used to digital reproduction (CD, DAT, MD and DCC). Digital sound stands for a clean reproduction: hardly any noise, no ticks and no splashing. Although the digital medium has only been on the market for around ten years, it has virtually taken the place of analogue. 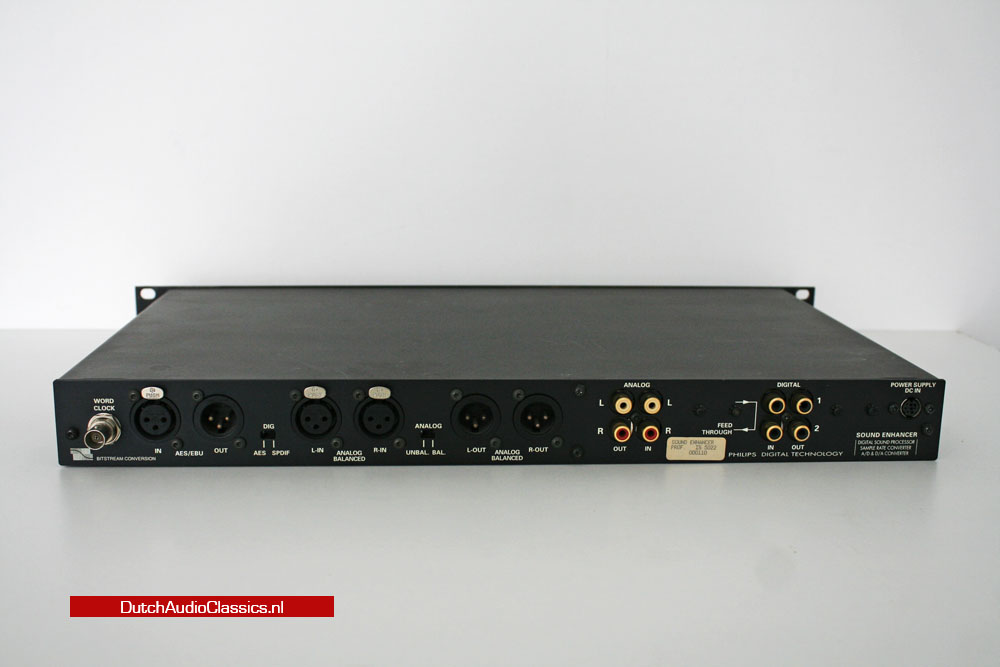 The Sound Enhancer must be incorporated into an existing system via a tape loop or between a pre and a power amplifier. The analog-in of the Sound Enhancer is connected to the tape or pre-out of the amplifier; analog-out of the Enhancer with the tape or main-in. The device itself is easy to operate. In the first place, an input must be selected, in this case the analogue input. Then one of the available functions can be selected via two small buttons on the front. If the source is selected, the corresponding LED will flash. The degree of effect can be adjusted as long as it is blinking.

The LED bars in the middle of the front indicate this. It all works very clearly and especially logically. For example, if noise reduction is selected, the bar lights up from left to right. So the longer the bar, the greater the suppression. With the spatial function (spatial display), the LEDs light up from the center of the bar and thus visualize the width that the sound will get. Well thought out! The Sound Enhancer divides the effects to be achieved into two groups, with compress / expand one group and all other functions the second. These groups cannot be used in combination with each other.

How does that work, such a Sound Enhancer? Suppose you still have a stack of LPs, which are more or less eaten by the test of time. The idea of ​​restoring and preserving appeals, but does it make sense and how high can the expectations be? After I connected the installation according to the English-language user instructions, I started experimenting.

First the scratch suppression was discussed. I set a slight amount of suppression and then placed a recently purchased LP full of noise and ticks on the record player. Along with reducing the ticks, the stereo image disappeared; this literally collapsed. But luckily we had a button for that: stereo enhancement! And yes, everything neatly slides back into place. Too much noise? The noise filter neatly removes everything above 6kHz according to taste and wishes. A little more bass in the recording? Can be arranged! 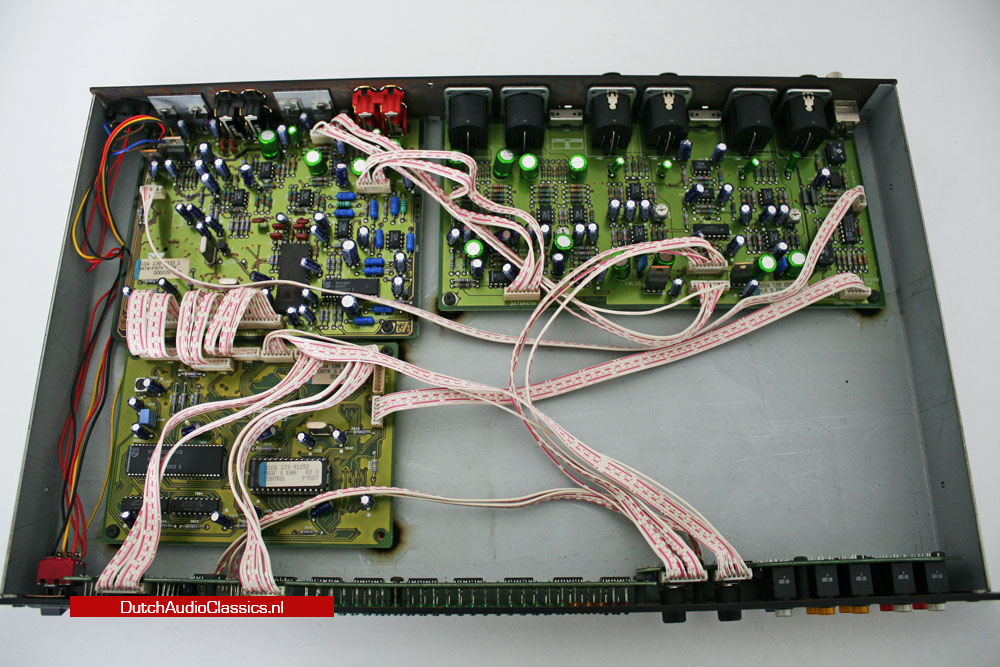 This is very nice 'toy'. And I have to say, the effects achieved are all of such a nature that the outcome often offers an improvement over the original. On the other hand, one should of course not expect miracles; when the scratch suppression is used in combination with a badly damaged LP, it is not the case that it suddenly becomes tick-free and splash-free. The level at which the ticks and splashes are audible does, however, decrease significantly and then mainly at the ticks. In this way, also in combination with the stereo enhancement and noise filtering functions, a lot can be restored: even old recordings on shellac plates.

I have already mentioned a number of the available functions and are primarily intended for use in recording. You can of course only use the device during playback. An application that I have not yet mentioned, but that can certainly be useful for the consumer, is the compression / expansion. Here it is possible to limit the dynamics in a recording, so that in a situation with a lot of background noise the silent passages are reproduced louder. Very useful when recording cassettes for in the car. Conversely, expansion can add a little more dynamics to a 'flat' shot. In addition, the ISP Sound Enhancer contains a good quality DAC (the Philips TDA1547). This guarantees a full, sleek reproduction and is probably a lot better than the DACs that are built-in as standard in Compact Disc players between 600 and 1000 dollar. So how about upgrading your CD player, portable DAT or DCC recorder with a Sound Enhancer as a separate DAC or ADC? 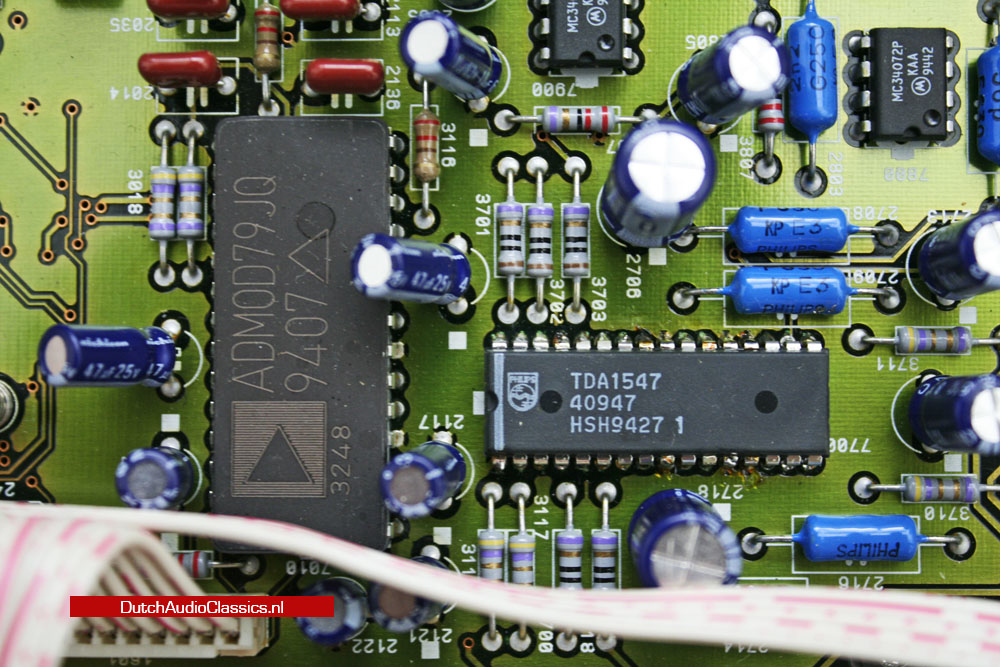 The ISP Sound Enhancer also includes a sample rate converter. Not all digital sources use the same sampling frequency (sample rate) and that can cause connection problems. The Sound Enhancer tunes all digital sources with a sample rate between 15 and 50 kHz. In addition, he is also able to read out any added subcodes (they can be made visible on a TV screen via an interface, which makes it possible to read texts and titles, for example). In addition, the Sound Enhancer has a so-called quantization noise imaging function, whereby the quantization noise is shifted outside the audible frequency band (noise shaping). Pitch variation of + or - 12% is possible and finally a jitter shelter is built in. Combined, this results in a very complete device!

I must say that I am impressed by the ISP Sound Enhancer: easy to use and very versatile. For those who own a lot of LPs and want to preserve them, this device is worth it. The tone, volume and stereo image controls give this Sound Enhancer the functionality of a digital preamplifier. Even if you consider that the built-in DAC is of high quality and can give a substantial profit compared to a somewhat older CD player, this Sound Enhancer certainly justifies the price.