On the even of the market launch of the revolutionary new Compact Disc Digital Audio system in Europe, its availability is eagerly awaited by music lovers and audio enthusiasts in many countries. 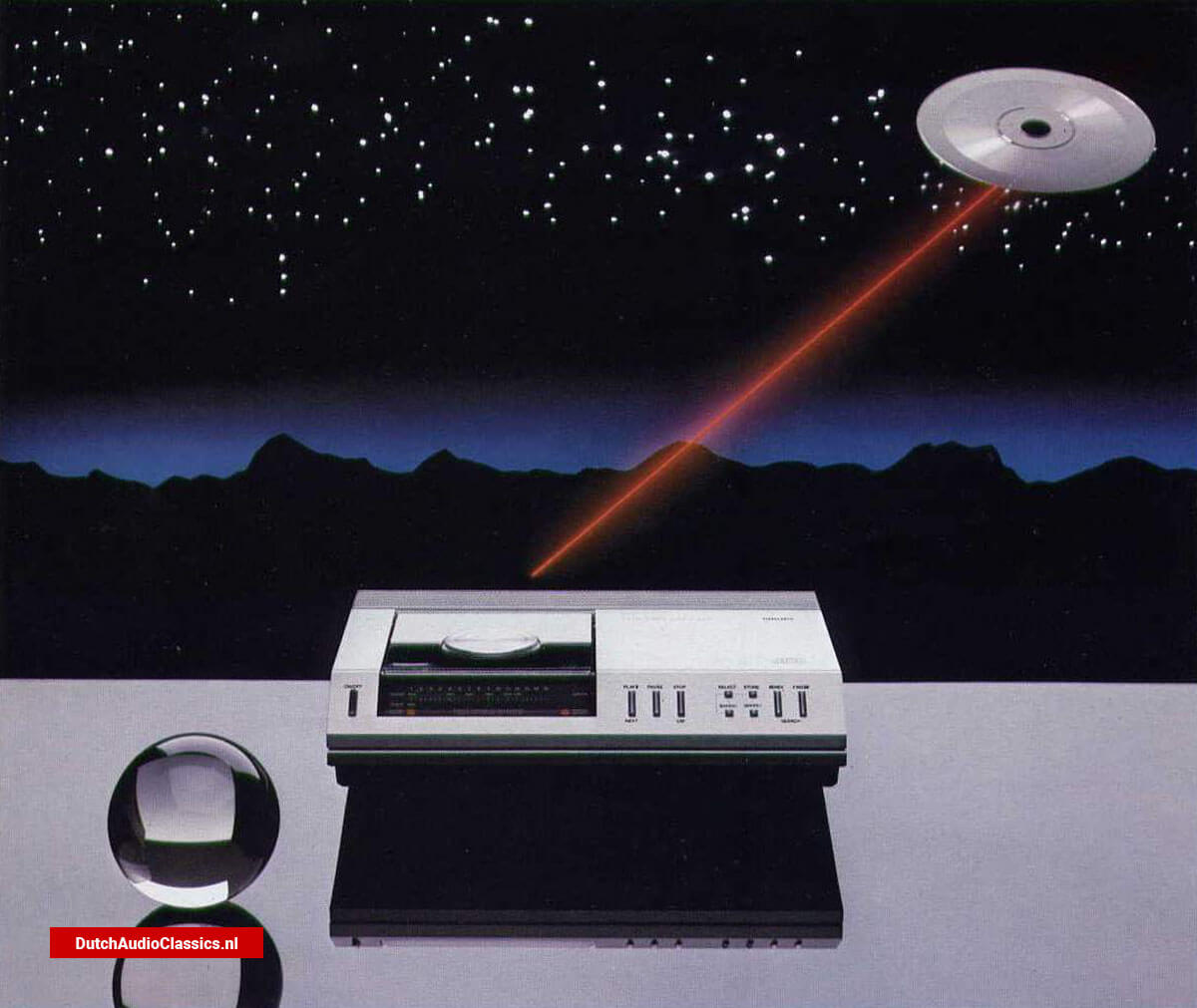 From March 1983 onwards, Compact Disc players will be delivered to consumers in France, West Germany, The Netherlands and the U.K. The introduction of the system in other European countries will follow very quickly, including among others: Belgium, Switzerland and Sweden in April, and Austria, Denmark, Finland, Itay and Spain in May.

First market reports from Japan, where sales by Philips' associate company Marantz, together with Hitachi and Sony started in November 1982, have indicated a very high level of interest with demand initiay exceeding supply. However, Philips' European manufacturing centres at Hasselt in Belgium and Eindhoven in the Netherlands are now in production to ensure adequate supply capacity for the expected European demand.

Because of these deveopments, the official system launch timing in the USE has been brought forward to June 1983. This has been made possible by the successful build-up of production capacity at Philips and PolyGram.

Supplying the new Compact Disc market with an adequate volume and selection of records right from the beginning was a crucial objective for the acceptance of the system. The PolyGram record company, which is 50% owned by Philips and 50% owned by Siemens, has declared its intention to hace no less than 200 record titles in production by end-1982. This objective has been met, and the company is continuing to develop its Compact Disc catalogue at full speed.

With other major recorde houses now entering the field, there can ben no question about the depth and quality of the available Compact Disc repertoire which comprises a wide musical selection of all genres: classical, popular - both the latest releases and 'standards' - easy listening and special interest titles.

The virutal industry-wide acceptance of Compact Disc as the universal standard sound digital audio sound carries means its success must now be regarded as assured. No innovation in audio has ever enjoyed such massive support by the entire industry. Even Compact Cassette -like Compact Disc a Philips invention- achieved succes gradually, and had to overcome competing systems. With Compact Disc, consumers will immediately benefit from a single worldwide standard, under which all players and records are fully compatible.

The Compact Disc Players built at Hasselt are at present the CD 200 and CD 300 models. Other models will be taken into production shortly in line with the planned extension of the Philips Compact Disc range. Players are also built for associated companies, and for Compact Disc system partners who do not as yet have their own manufacturing facilities. At present, the Hasselt audio factory is Philips' world supply centre for Compact Disc players, with the exception of the original CD 100 'Super Compact' model. This is at present built at one of Philips' factories in Eindhoven, the Netherlands, where it was developed.

It is expected that Philips' associate company Marantz will establish Compact Disc production capability in Japan during 1983 to meet demand in that country. Philips will also launch the Compact Disc system in the USA from 1 June under its Magnavox brand.

A total of some 2,700 people are employed at the Philips Audio and P.M.F. factories in Hasselt. P.M.F. is supplying metal and plastic components for internal and external customers 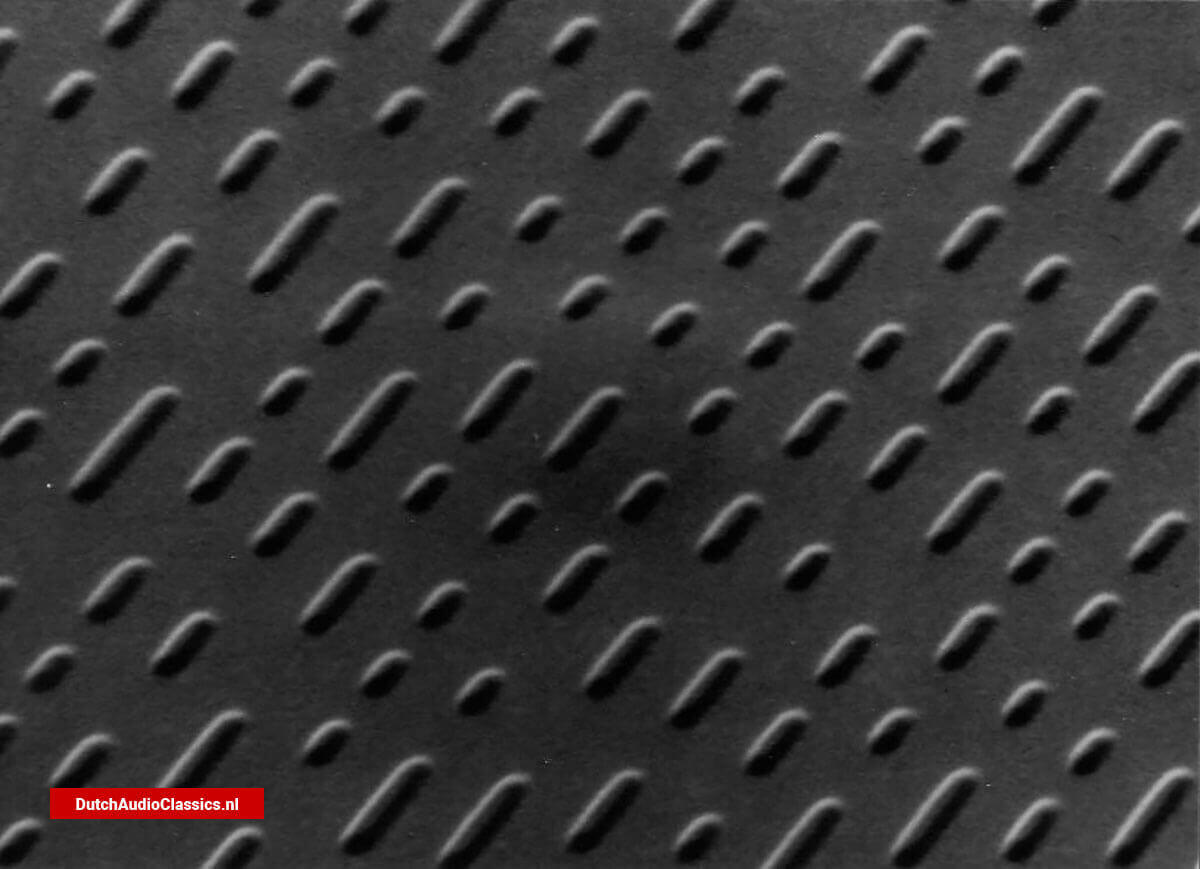 The pit structure of a Compact Disc magnified 12.500 times 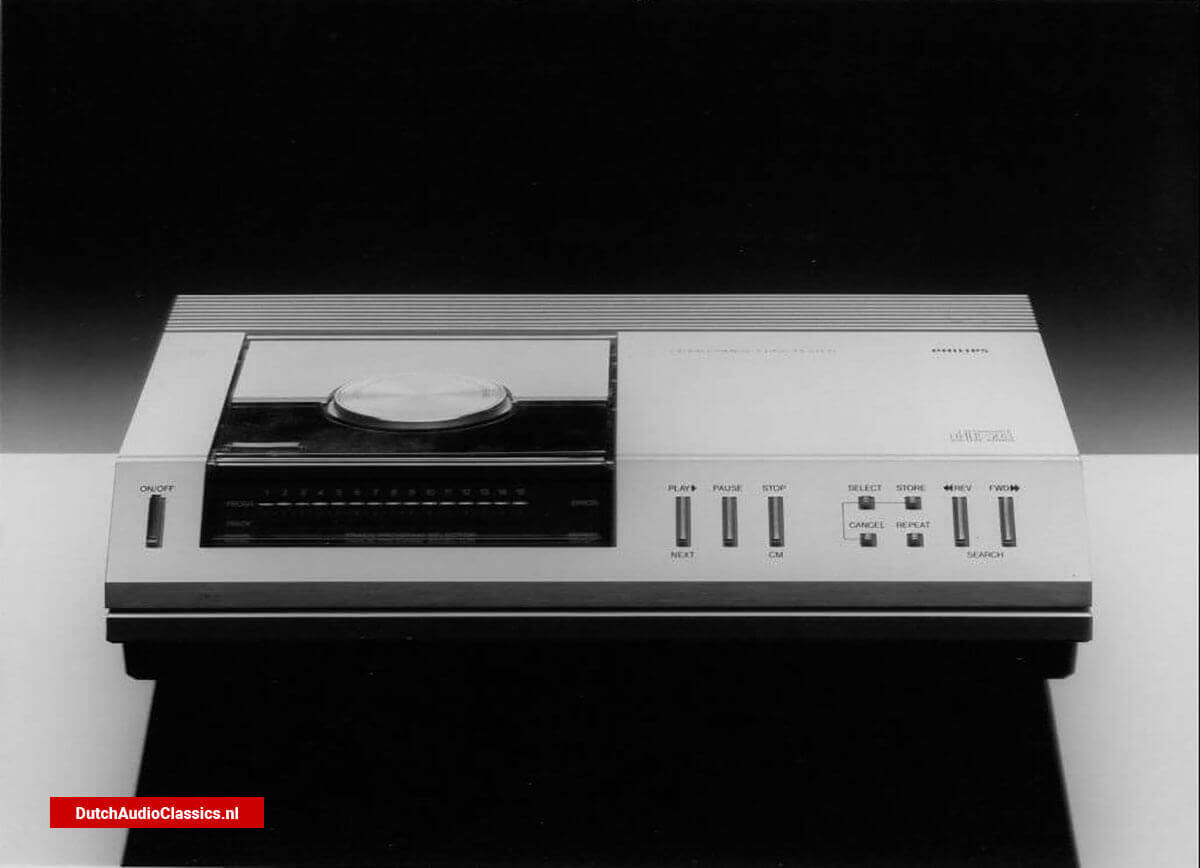 The Philips CD100 is the world's smallest Compact Disc player, measuring only 32cm wide, 7,5cm high and 25,5cm deep. This model, of top-loading design, has facilities for play, next track, search (FWD/REV), up to 15 track preselections in any sequence, pause with LED indication, LED display of playing track and preselections chosen. 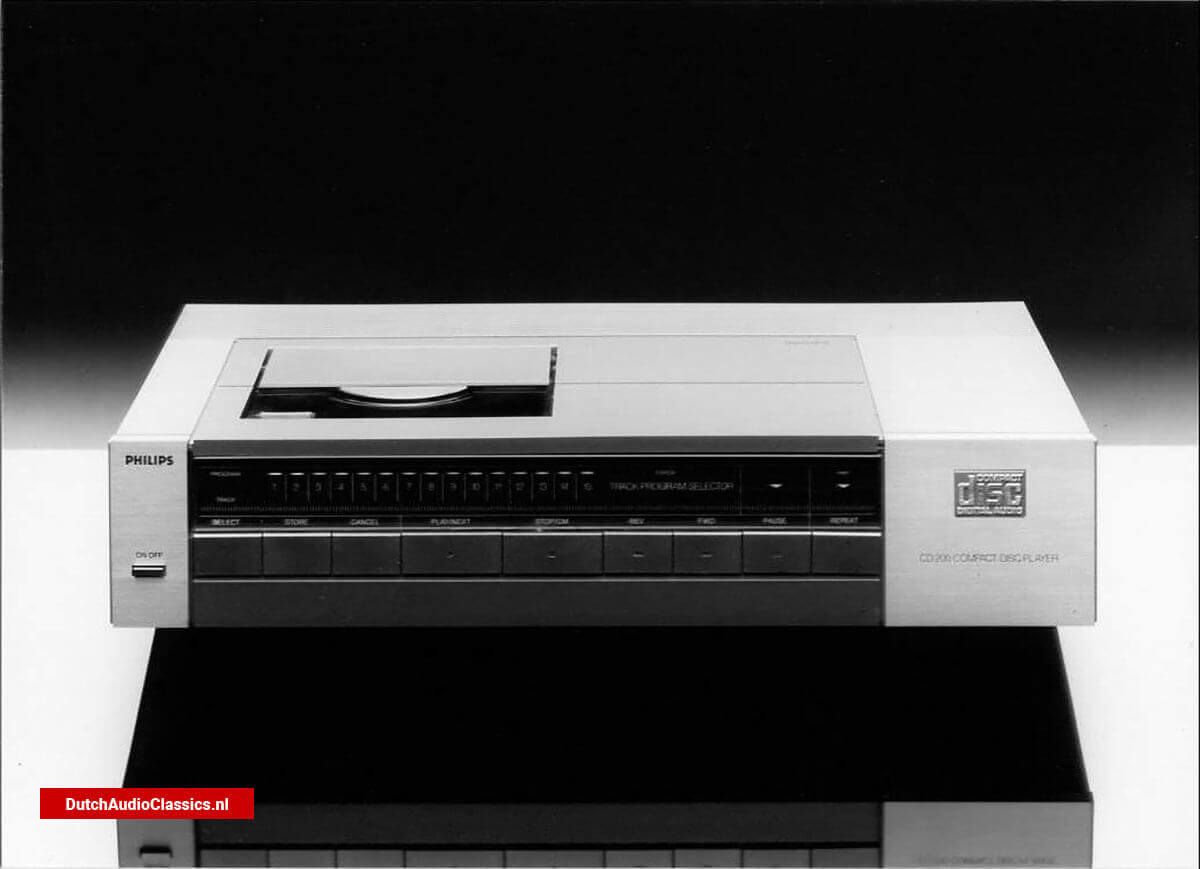 The Philips CD200 is a top-loading design Compact Disc player in the popular 'HiFi system'. It is 42cm wide, 8cm high and 30cm deep. Facilities provided are play, next track, search (FWD/REV), up to 15 track preselections in any sequence, play with LED indication, repeat with LED, LED display of playing track and preselections chosen. 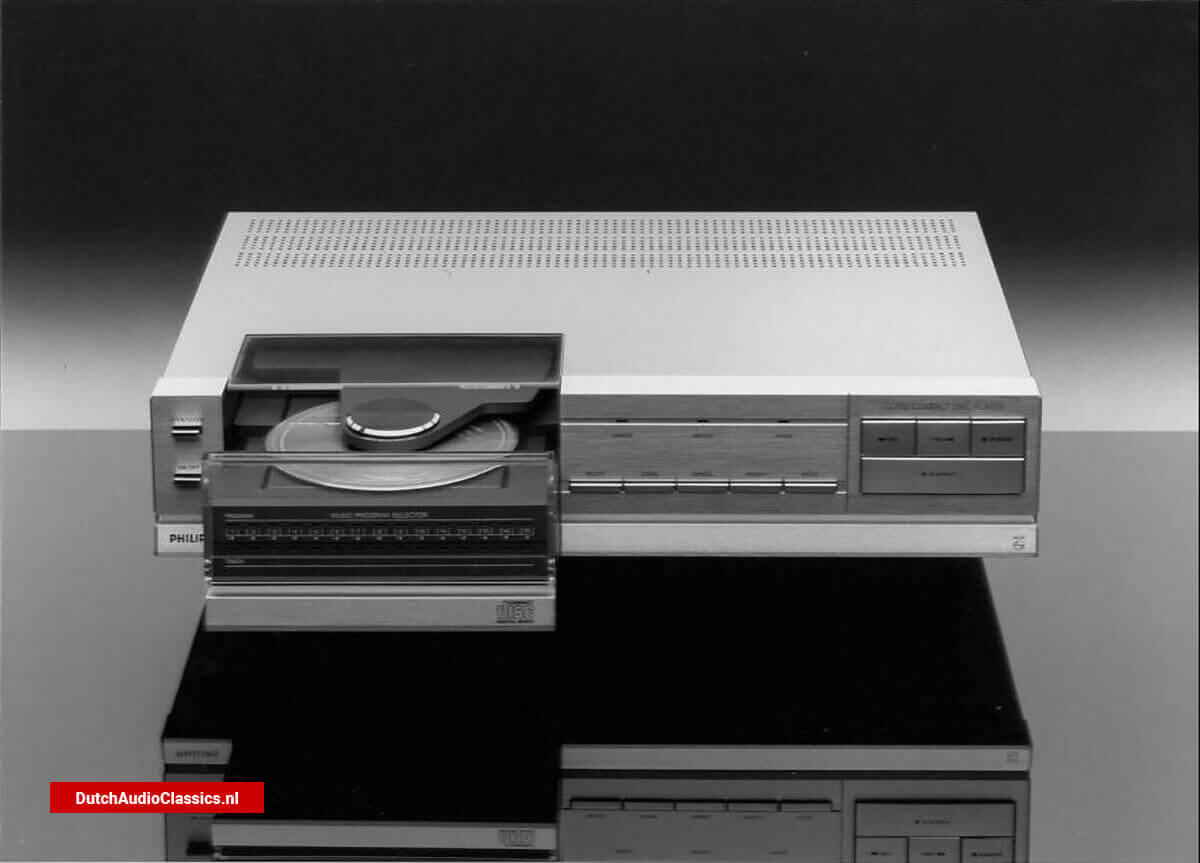 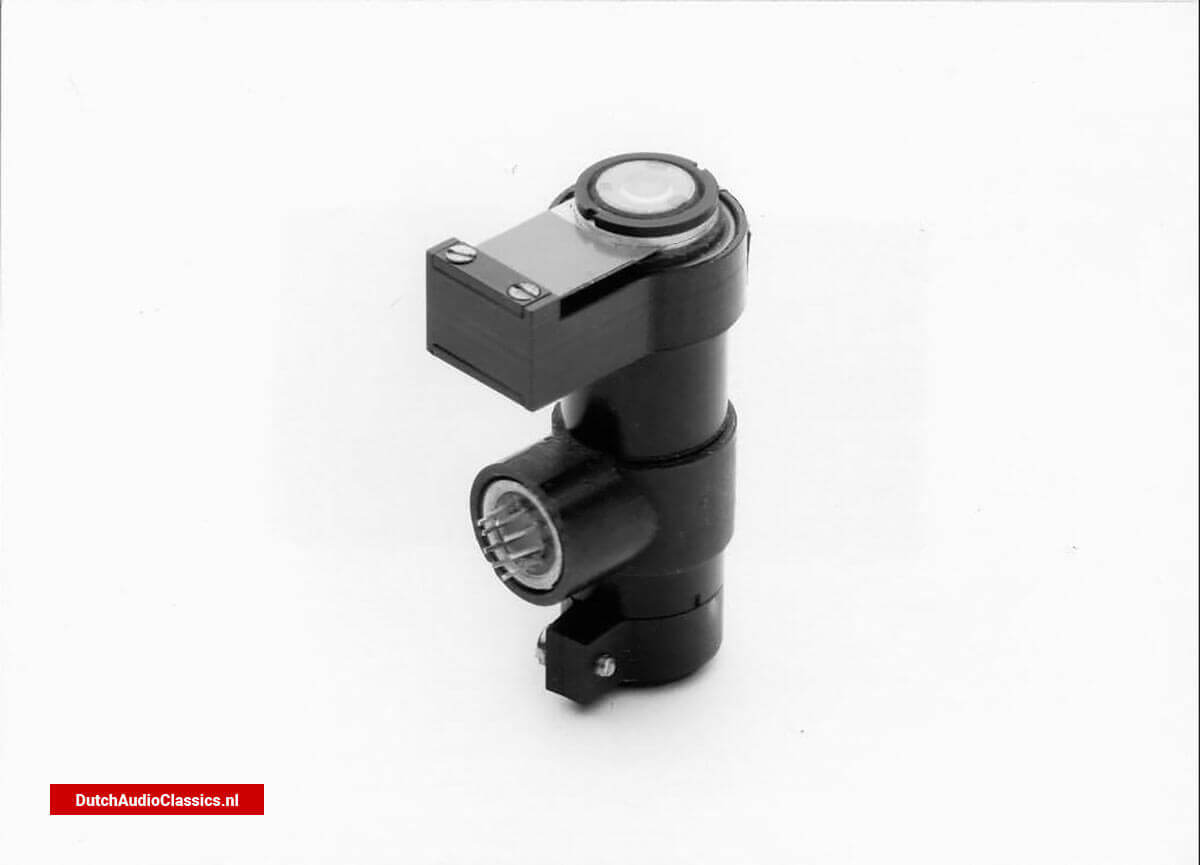 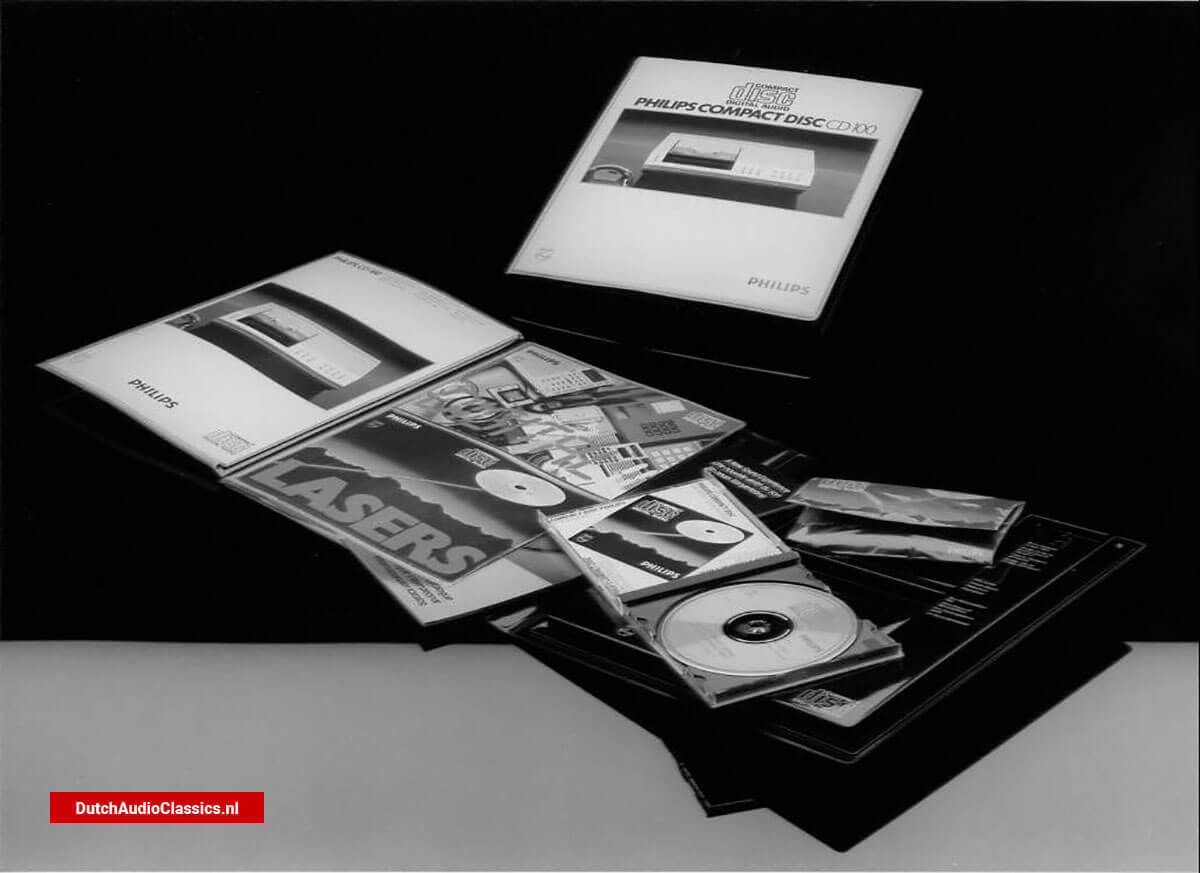 The Philips Compact Disc promotional by-pack included with each Philips CD player. Contents include:
- Instruction for use in 10 languages
- A demonstration disc
- Cleaning duster
- A booklet on digital technology and one on lasers
- An extensive PolyGram Software Catalogue
The by-pack is intended to be kept by the user to house the player's documentation, transport screws and cleaning duster. 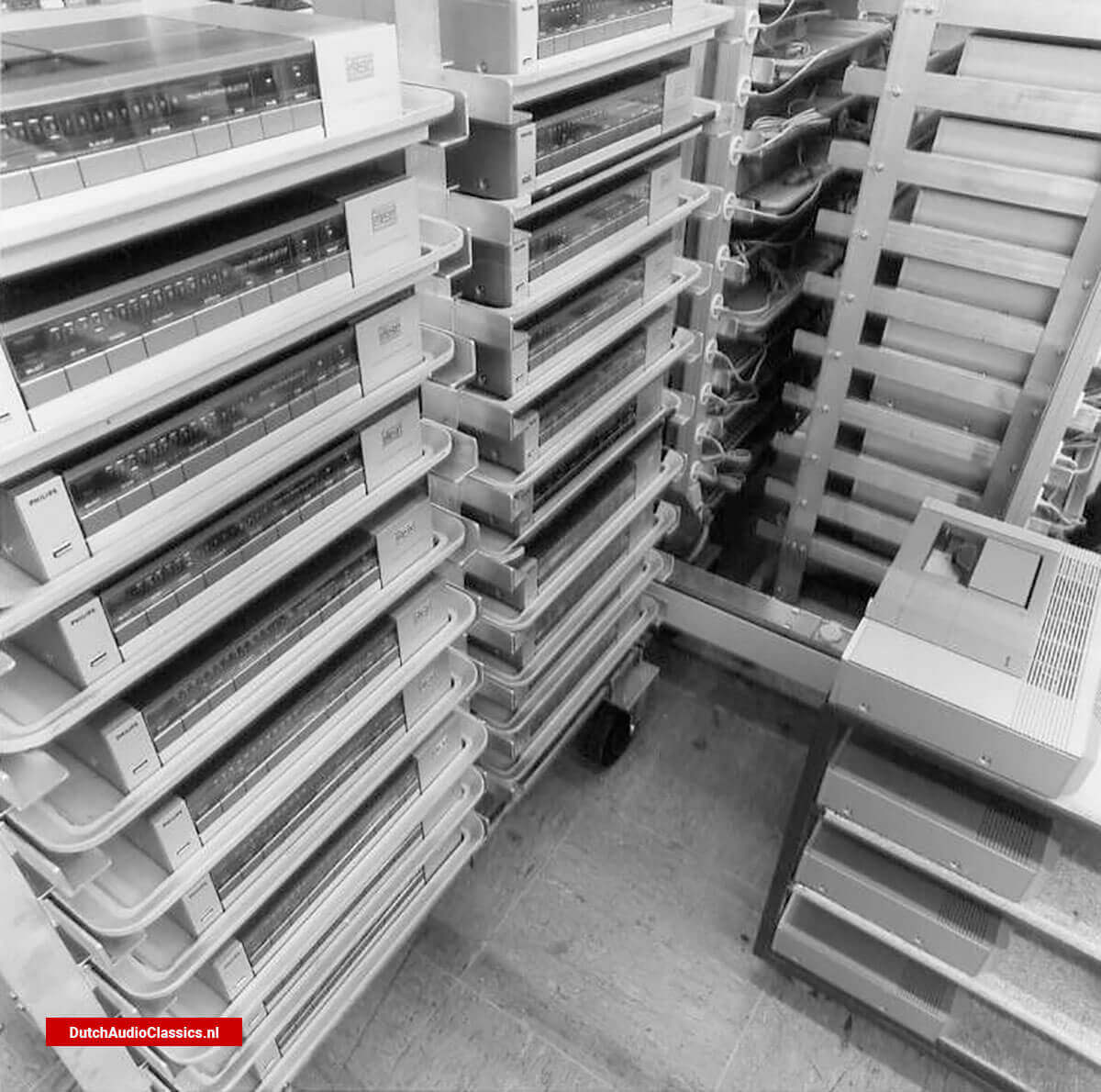 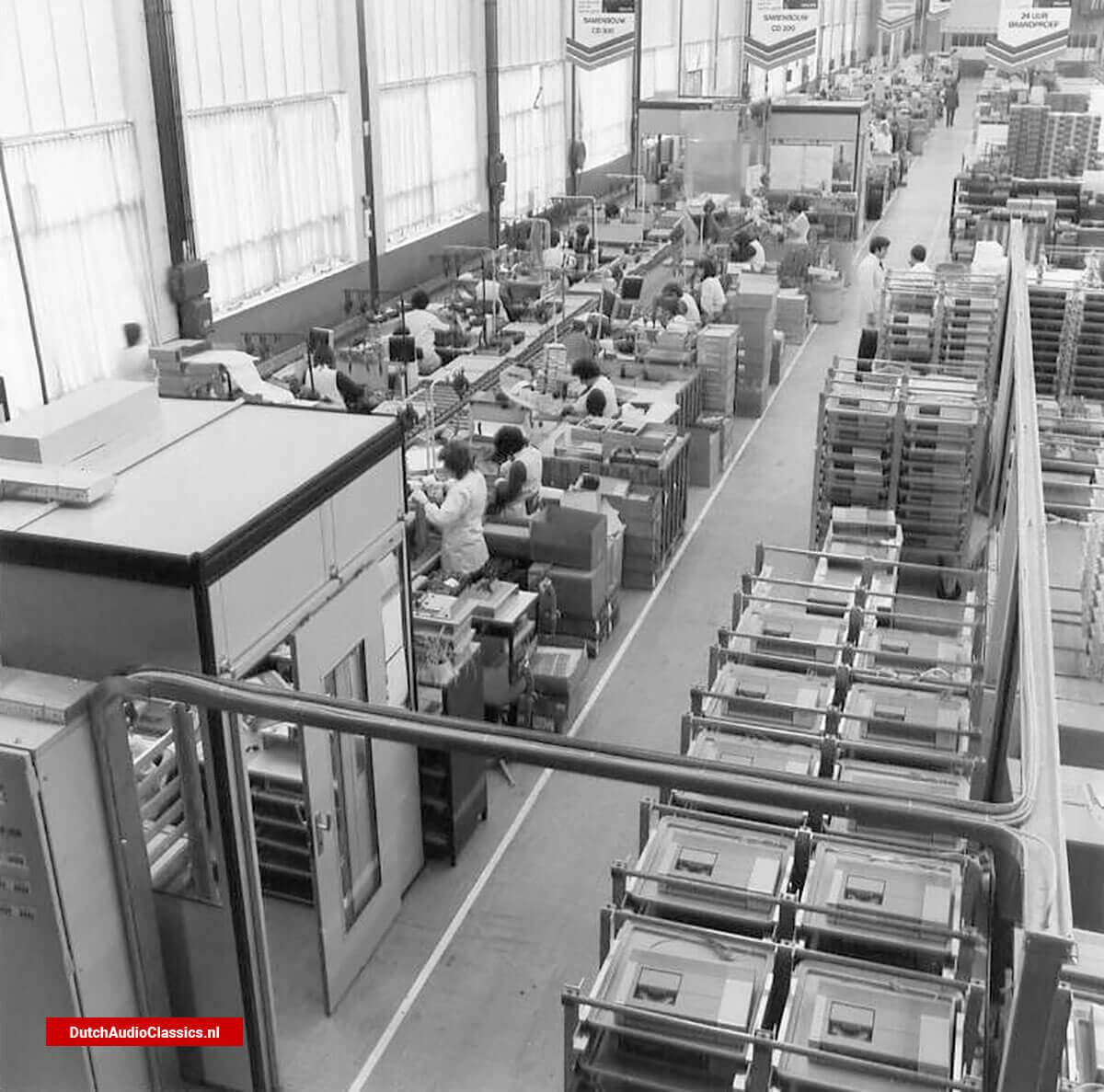 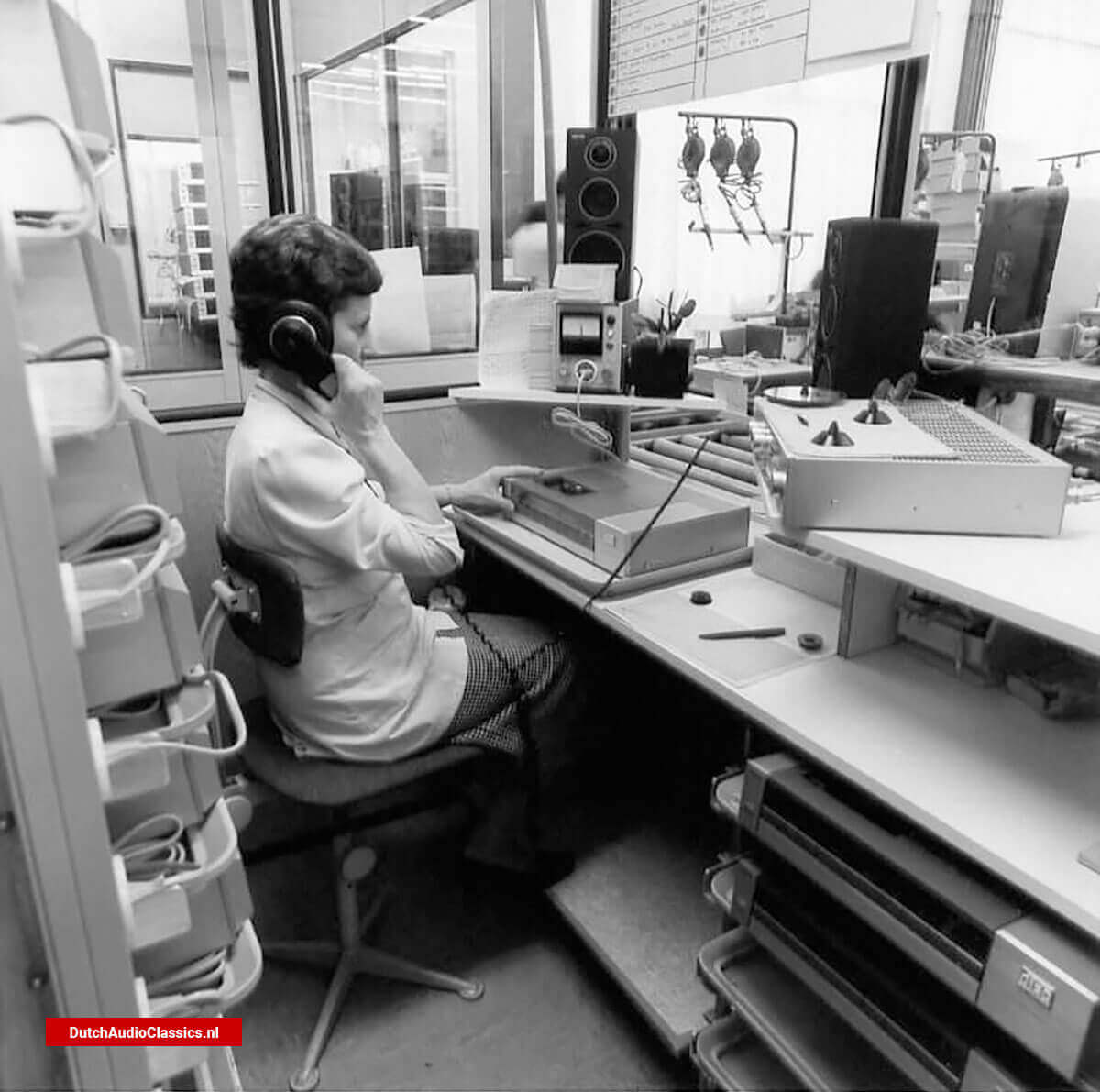 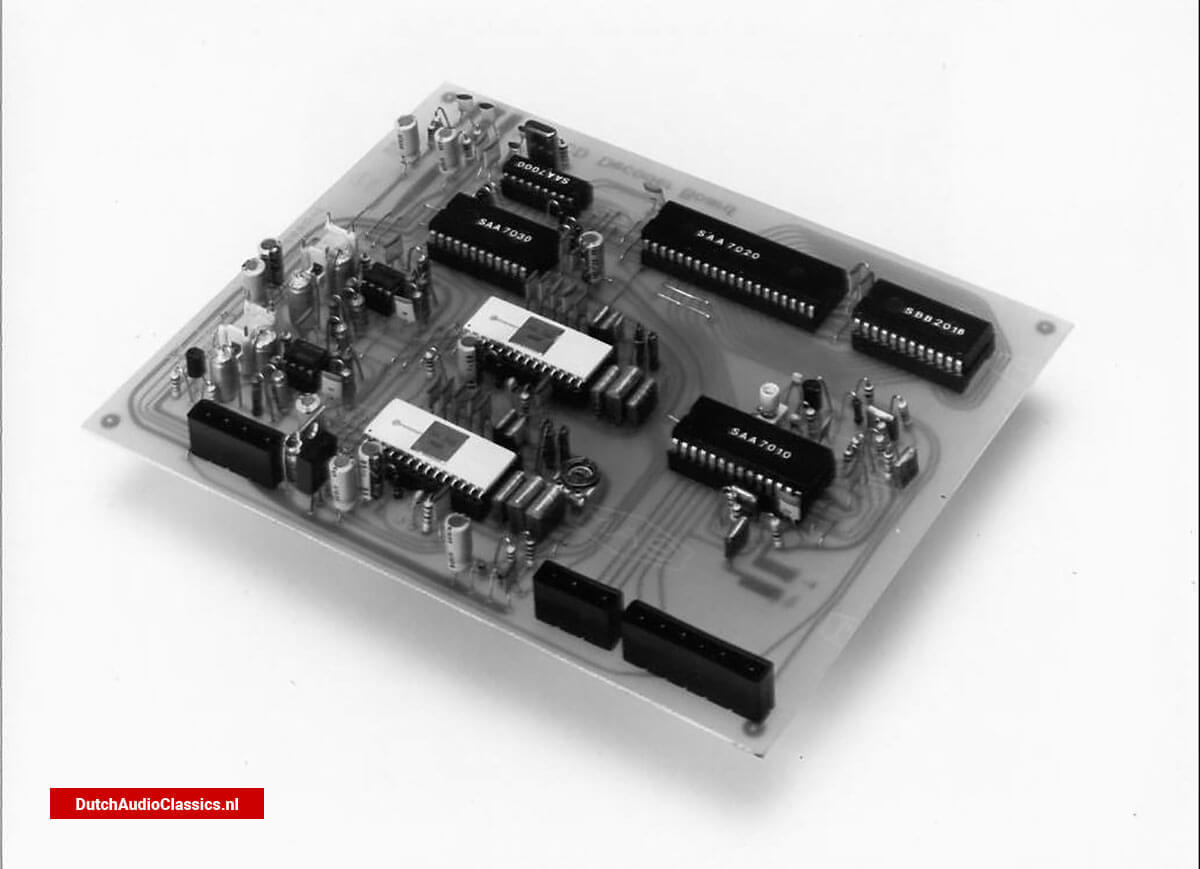 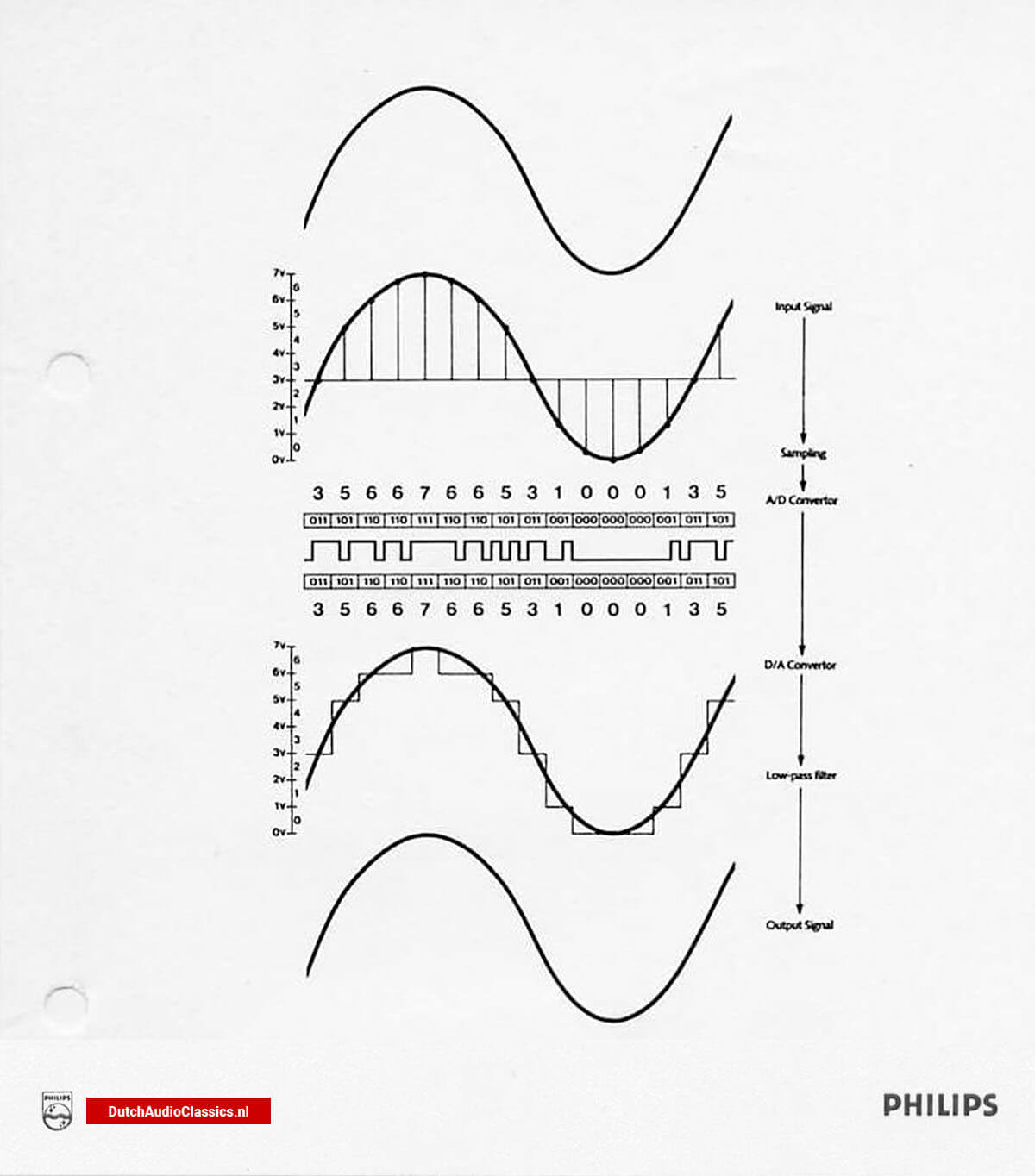 The analog signal (top waveform) is converted into digital form by sampling the signal and converting the measurement into a digital, binary number. Thus analog value 6V becomes binary 110. In the decoding system (see Figure 5), the reverse process is performed. In actual practice, the combination of high speed sampling, 16 bit measurements and filtering ensures highly accurate reproduction of the original waveform. 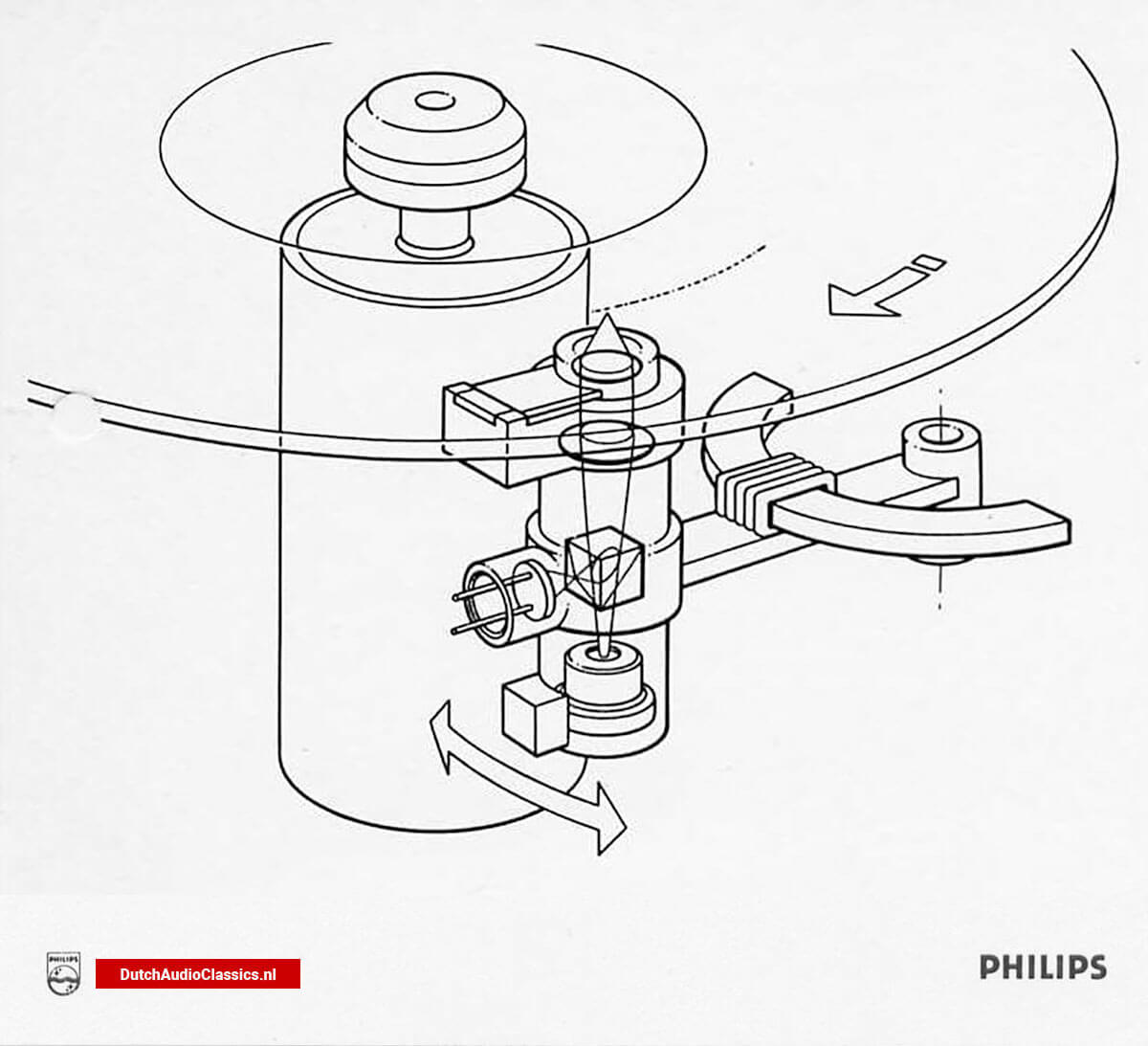 Figure 3.
Laser lght is focussed into the disc's bright, reflective surface where it reads the microscopic pits as either a high reflected light level or a very low level since light is scattered in the pits. These signals are converted into electronic digits by the illustrated photodiode. Not the tracking arm, which moves from the inside to the outside with a progressive speed change from 500 to 200 revolutions/minute. 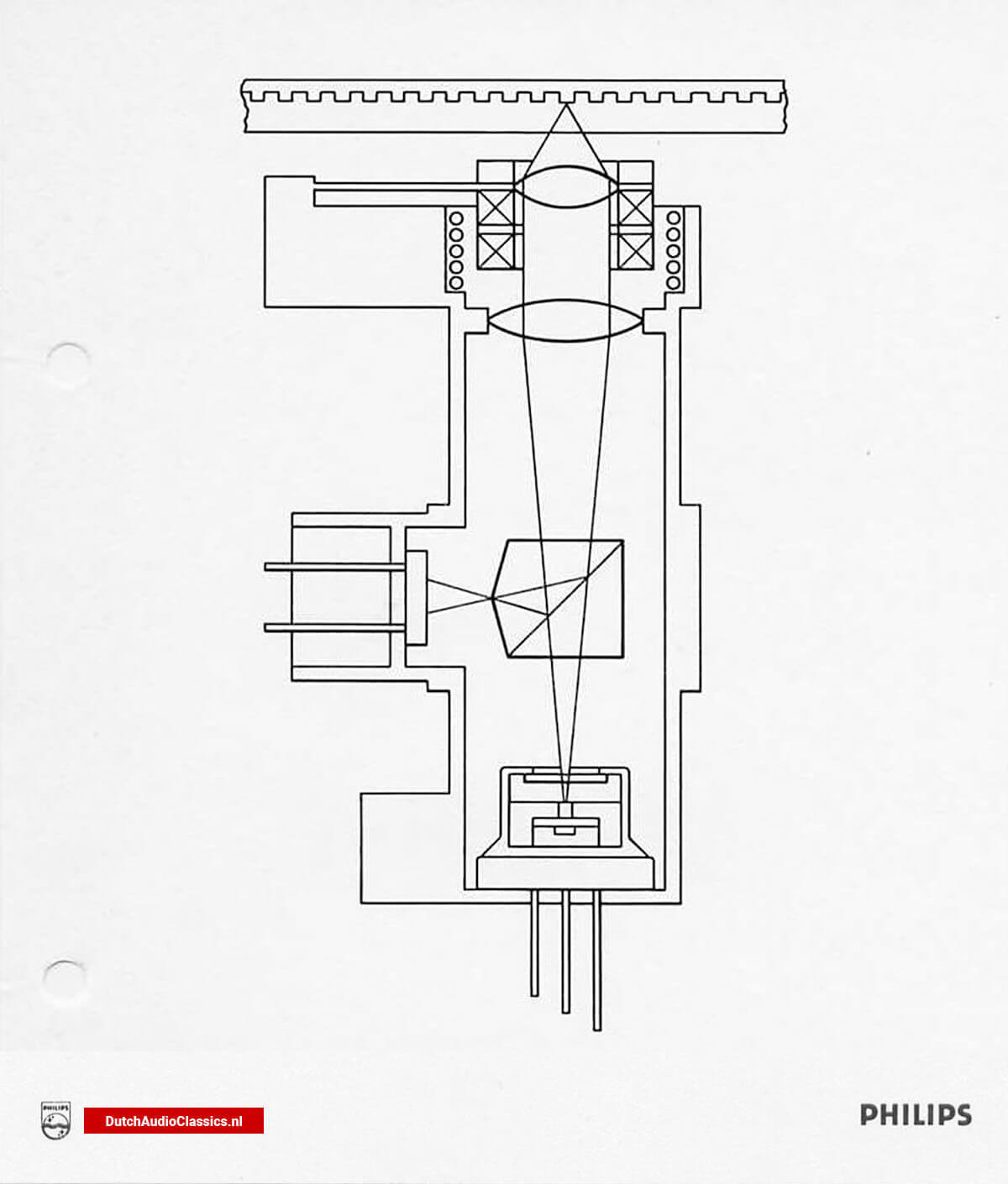 Figure 4.
The laser beam passes through a special semi-reflecting prism and on to the lens system, whih keeps it in sharp focus on the disc surface. The reflected light is diverted by the prism and into the photodiode. 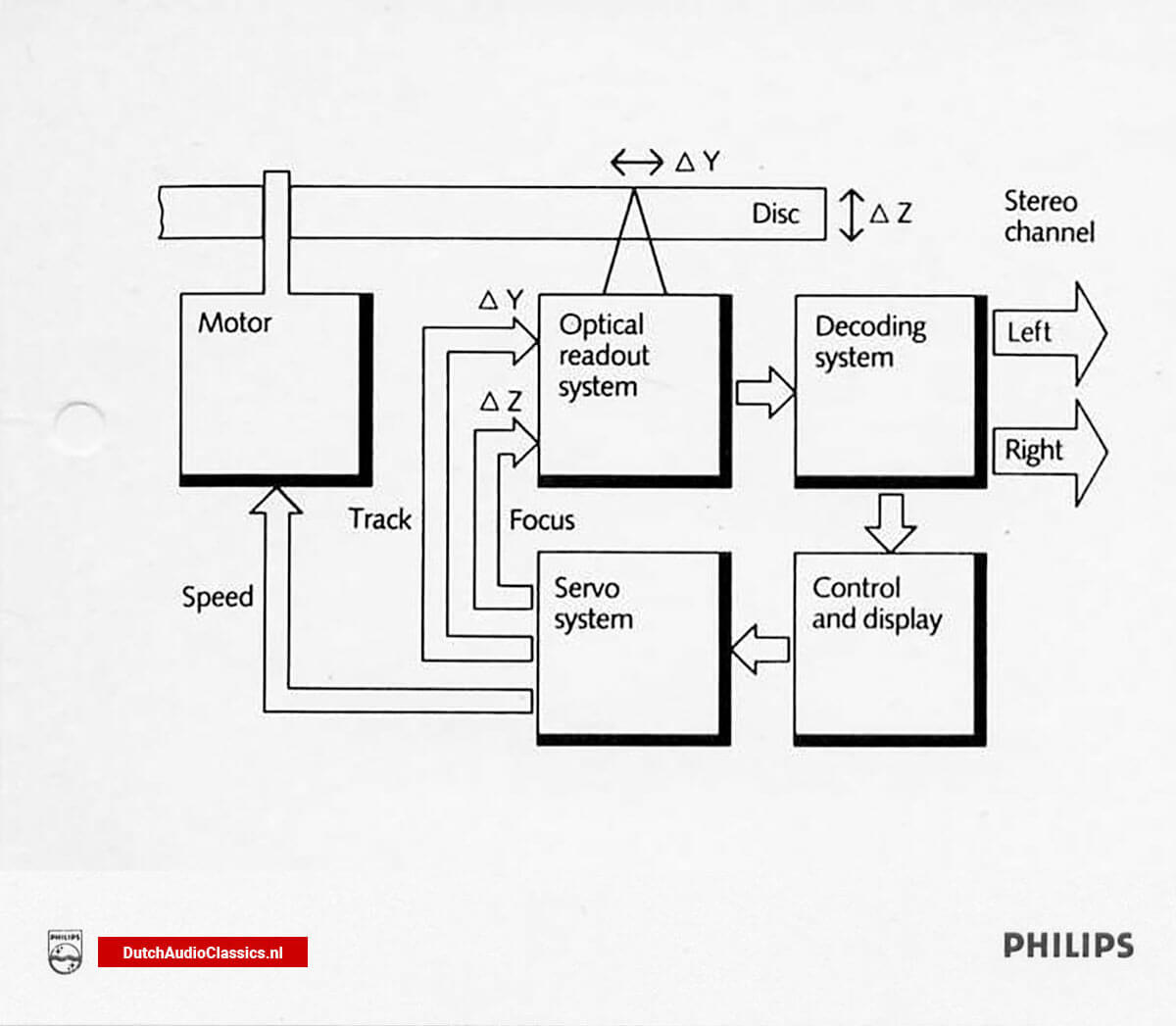 Figure 5.
Simple schematic of the system's electronics shows how speed, tracking and focussing are controlled by a servo system and how the digital signals are decoded for both channels. Control information allows any combination of tracks to be played in any desired sequence simply by entering track numbers at the keyboard. At the same time a text display may be provided to identify the music being played. 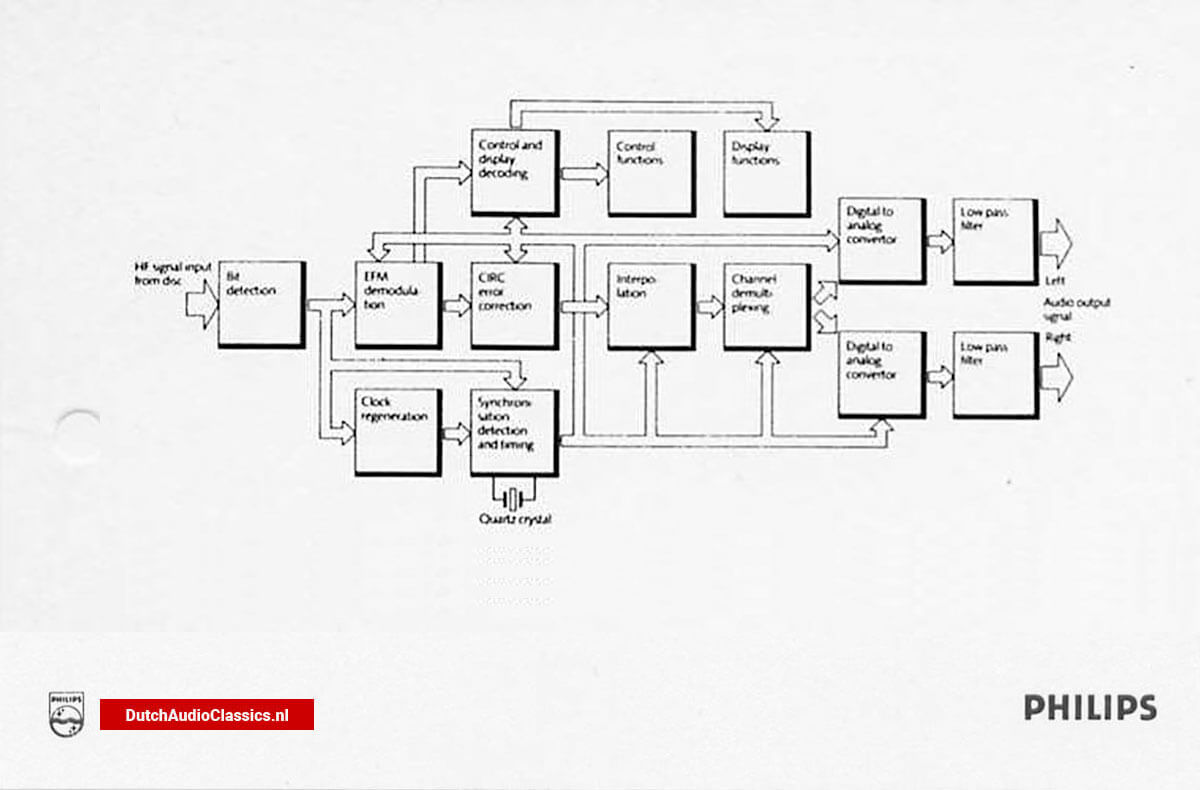 Figure 6.
The data stream that is derived from the disc is in coded form and is mixed with parity check symbols. It is also interleaved and rounded out with synchronisation and control and display information. In order to handle and coordinate this data, Philips developed special LSIs and they, together with other advanced microelectronic circuity, carry out over four million switching operations per second. The basi functions that are performed are:
- Clocking, to eliminate small timing errors (jitter)
- decoding and error correction plus interpolation
- Channel separation (demultiplexing)
- Digital-to-analog conversion 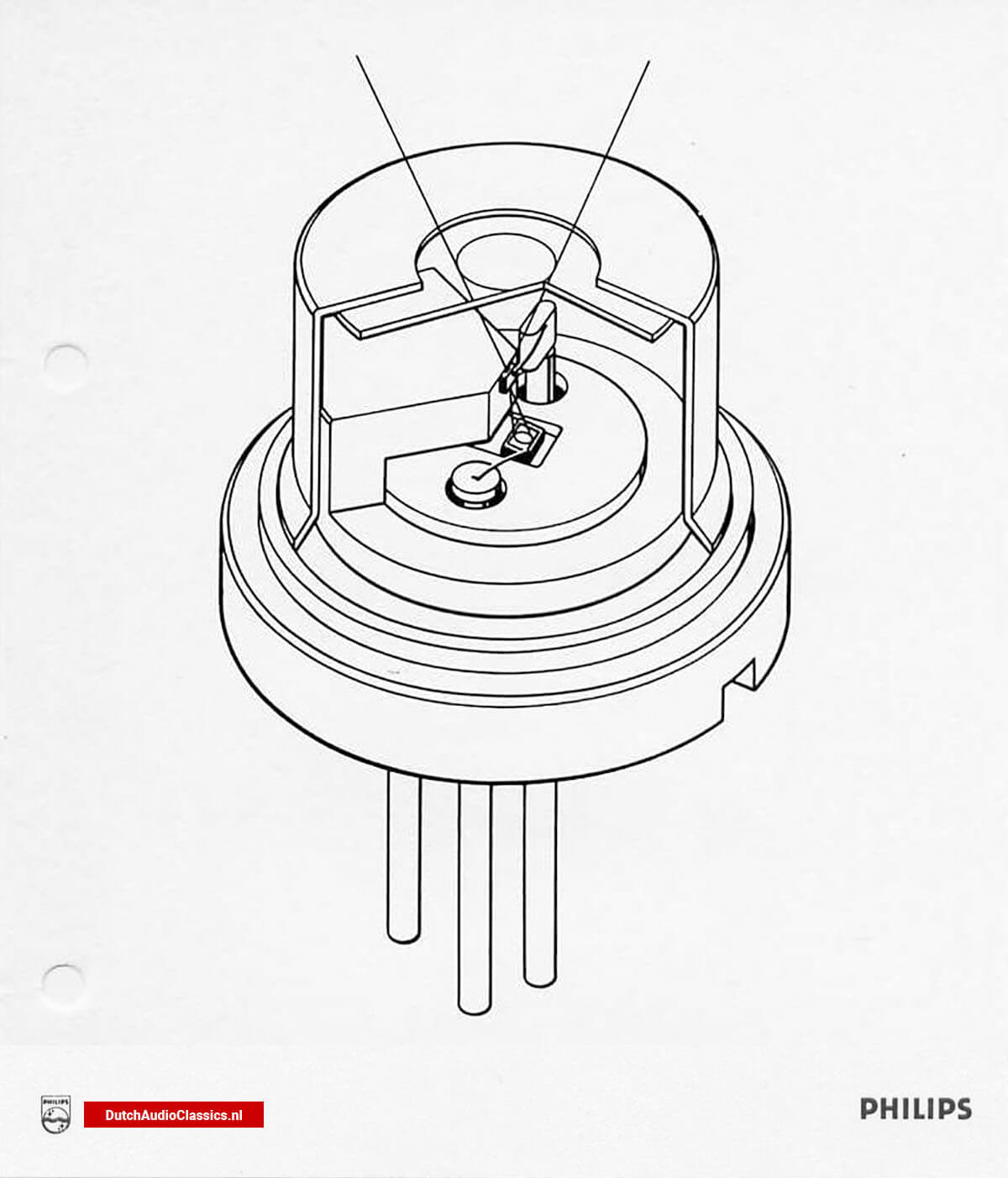 Figure 7.
The miniature diode laser emits invisible, infra-red light and is perfectly safe. The laser's light is maintained in ultra-sharp focus on the disc where it reads a track with pits only 0,5µm wide and 0,1 µm deep. 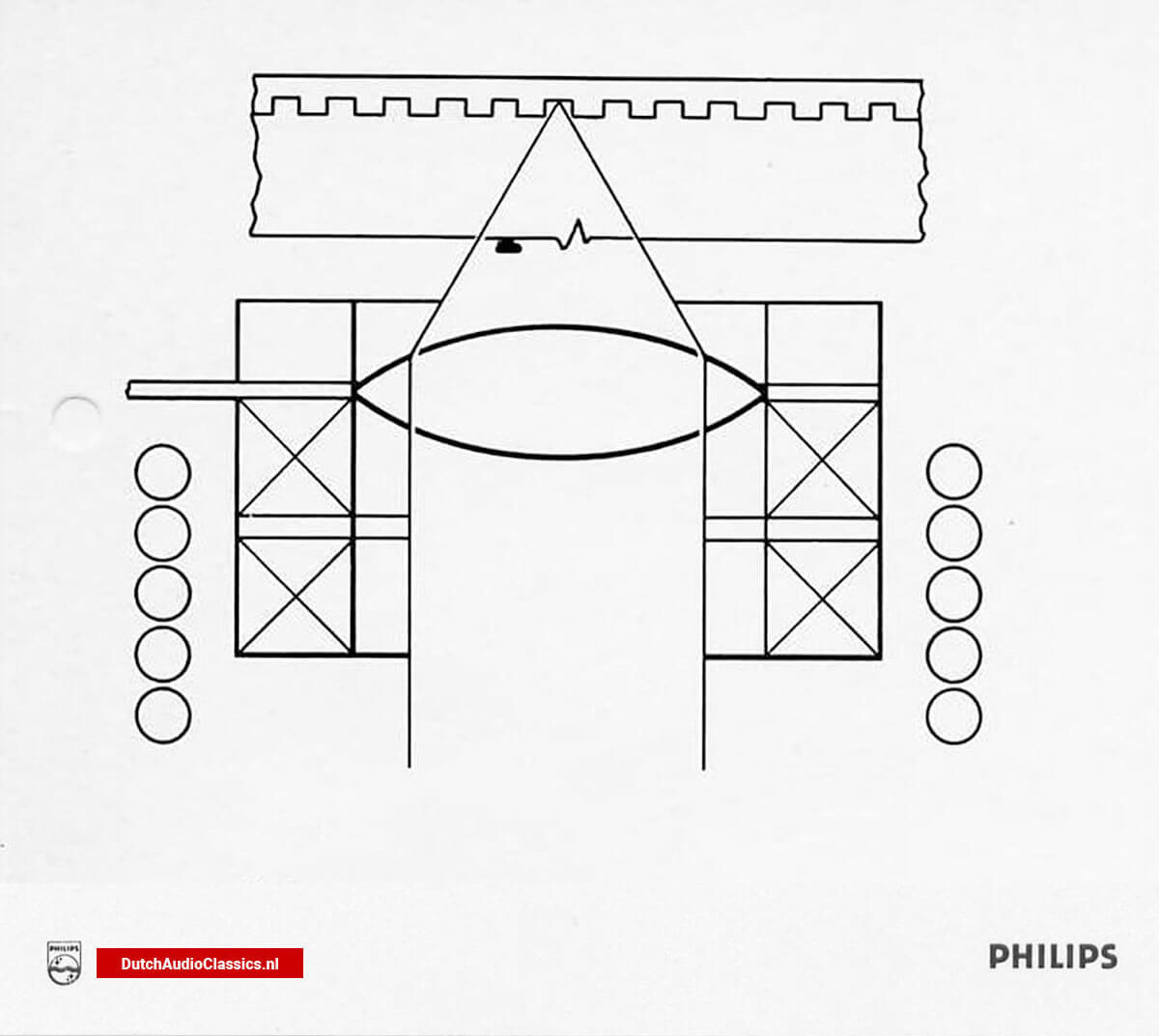 Figure 8.
The laser beam is directed through the transparent side of the disc and reeds the data that is inside the disc, where it is fully proteced. Because the beam is highly convergent, particles and scratches on the disc surface are small in relation to the spot diamete on the surface and they therefore have little effect on the density of the reflected light. 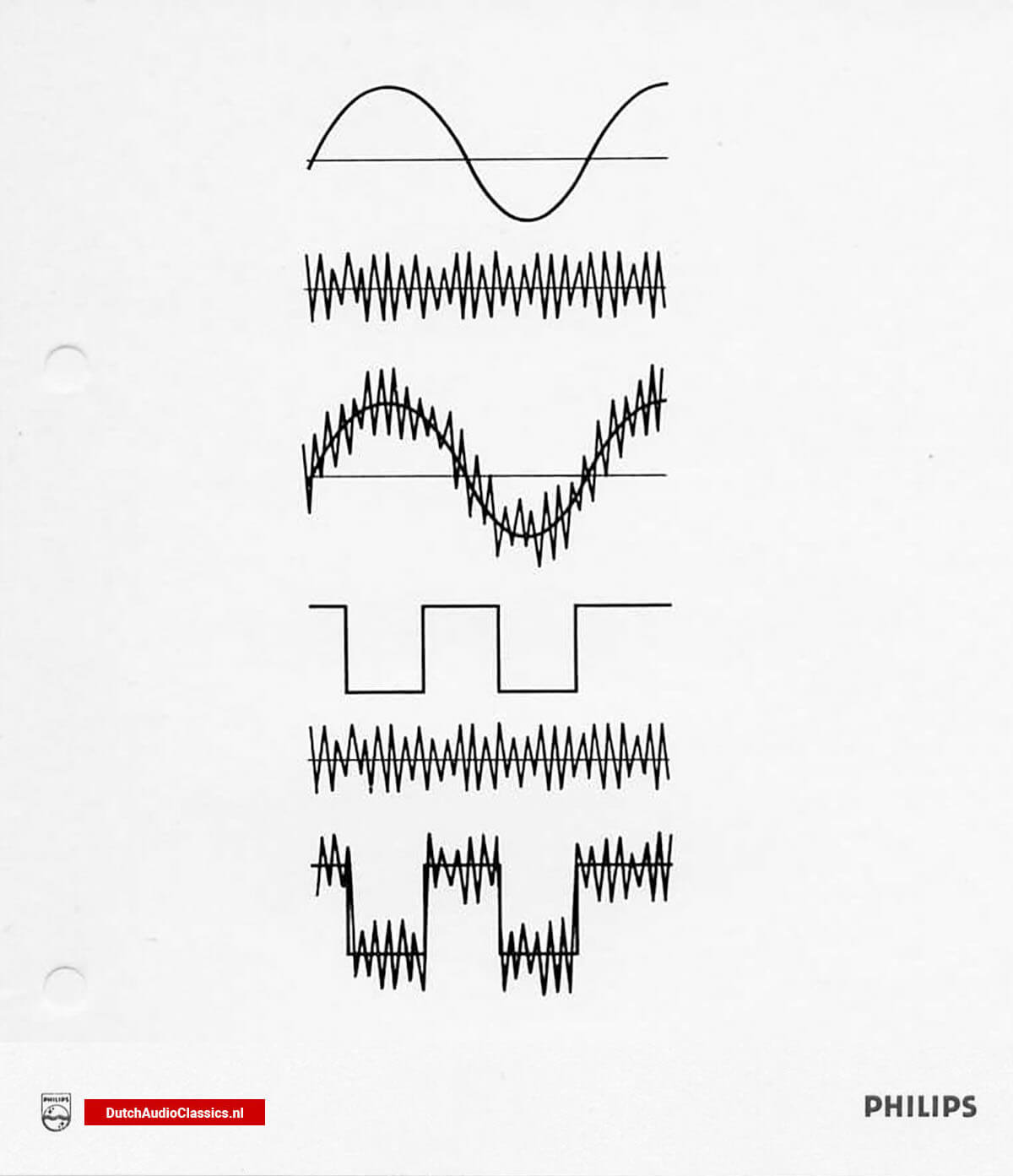 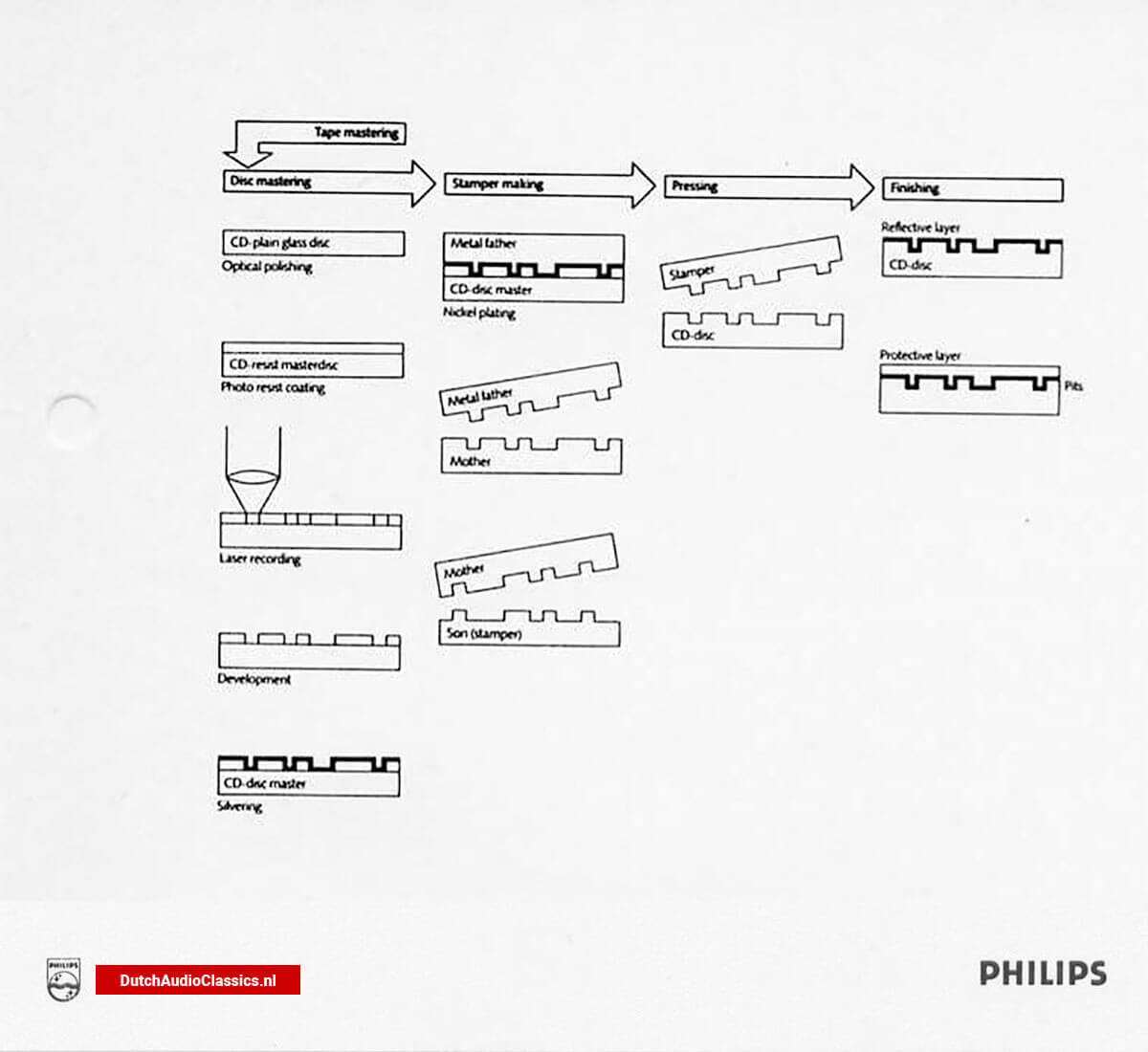 Figure 13.
Like the conventional analog gramophone record, Compact Discs are compression or injection moulded. They go through the same basic stages of pre-mastering, mastering and replication, but the production process is different in many respects. The most obvious of these differences is the encoding of the audio recording into the CD digital format and the 'cutting' of this digital recording with a high-power laser, which writes a pattern of pits in the photoresist. 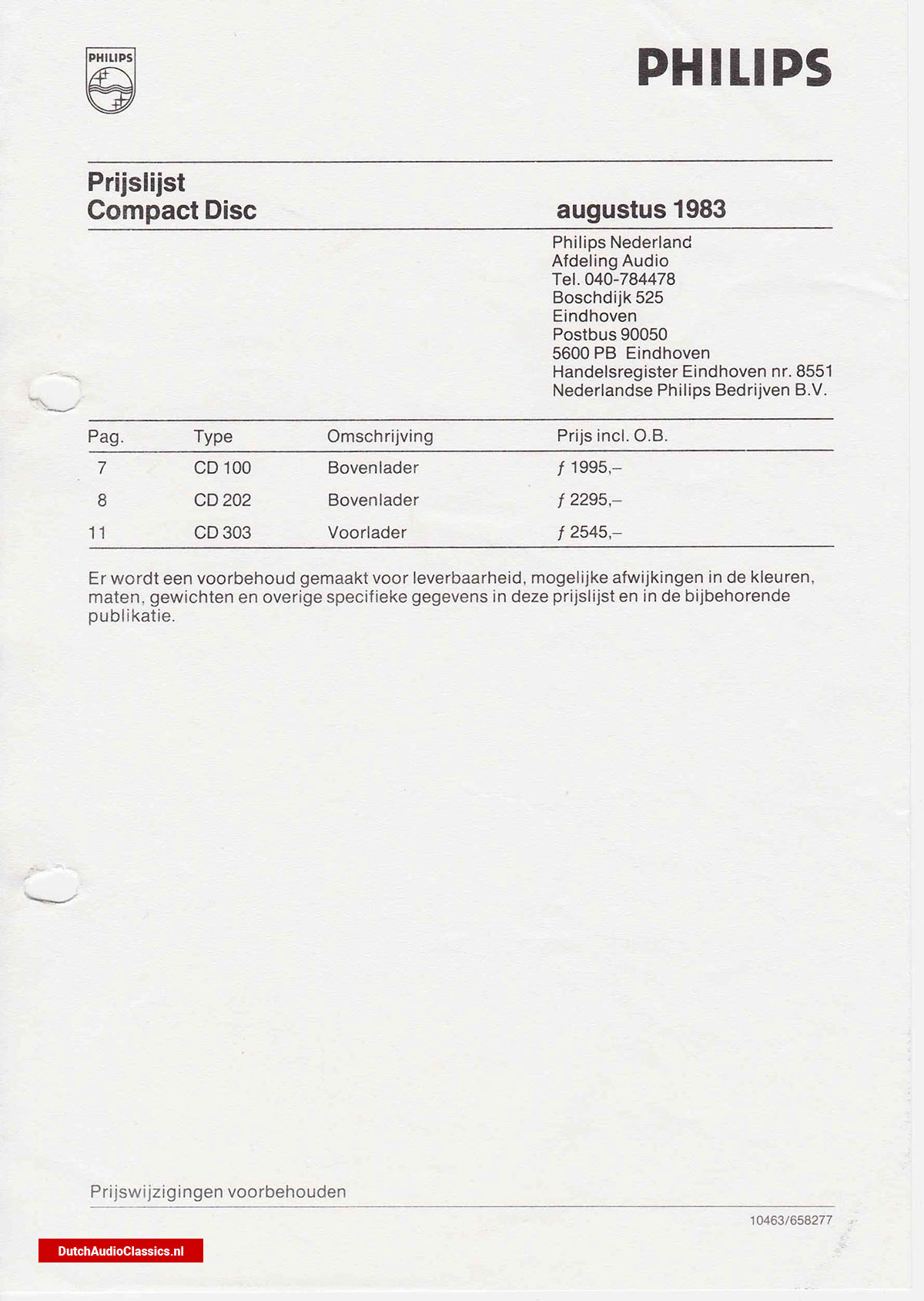