In the last months of 1890, Gerard Philips returned to the Netherlands after an exciting five-year trip abroad. Schooled as a mechanical engineer, Philips had felt his imagination flare when he'd glimpsed during his travels one of the newest technologies of the day: incandescent lamps. He decided to open a lamp factory in his native country, and in 1891, with financial backing from his father, he purchased a derelict factory in the town of Eindhoven. One year later, Philips had finished outfitting his factory and had concluded his initial tests. A staff of ten was hired, anc Philips and Co. was in business.

Within a decade, Philips became the third largest manufacturer of electric lamps in Europe, and little more than a decade after that shares in the company were being traded on the Amsterdam Stock Exchange. It survived the effects of two world wars-including bombings and strafings of the Eindhoven facilities by both sides-and the crippling depression of the Thirties. Today, ninety-eight years after the tight bulb went on over Gerard Philips's head, the company he founded ranks among the largest electronics and industrial concerns in the world.

After purchasing Magnavox in 1974, Philips acquired Philco and Sylvania in 1981, making it a giant in the global video market. Meanwhile, NatLab (Nature Laboratories | Natuurkundig laboratorium), the main, Eindhoven-based Philips research group, was busy working on something that would turn the audio world upside down: the compact disc. 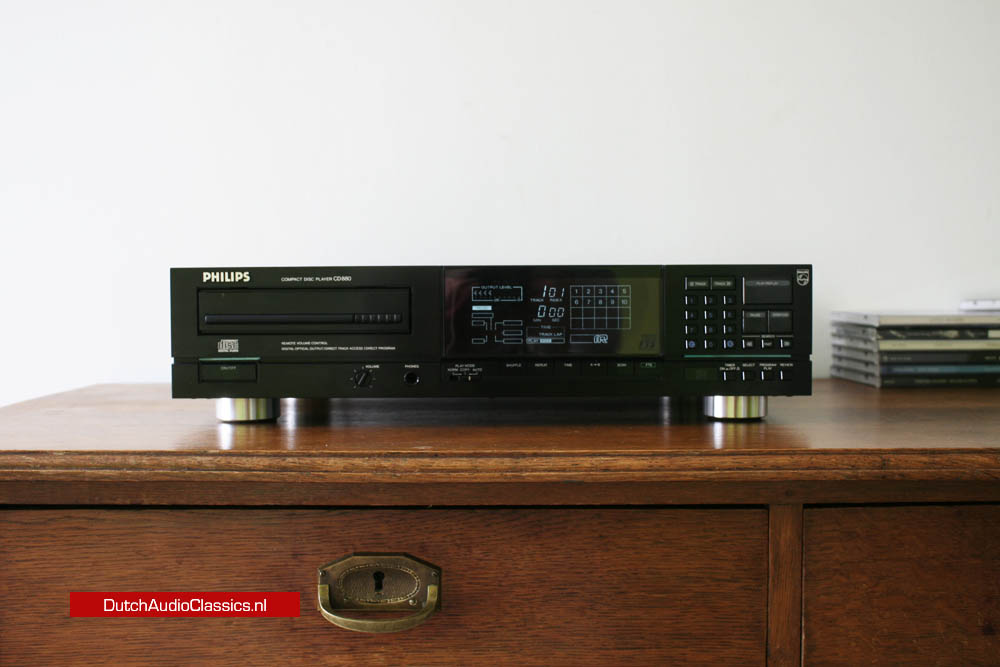 The Philips CD880 cdplayer. Over three-quarters of its parts are made by Philips itself or by its contract suppliers, including the circuit boards, all electrical ccmponents, special servo IC's, plastic components, and the player's metal case.

Back in 1981, Philips found itself with the principles of an incredibly sophisticated process of digital signal encoding and decoding -and little else. After it was decided to bring Sony in as a partner to develop the system, product managers from the Philips consumer electronics division were assembled. The new system's components had to be manufactured or purchased. Someone had to work out the ergonomics, designing a user-friendly faceplate and a remote control. And all of the components had to be inserted onto a chassis. Compact disc technology is nearly ten years old now, but the entire process begins anew whenever a new CD player is conceived.

Eindhoven insiders call this process a "design track." But first there must be demand for a new player. It can come from several directions. The tech teams from NatLab might come up with new chips or circuitry. Designers from the Corporate Industrial Design studios might discover a simpler way to program a changer. Or the competition might introduce a breakthrough product that must be matched or improved upon.

Whatever the source of the demand, the response is a meeting, typically an intensive three-day session, where representatives from technology, design, production, and marketing formulate a proposal. Outside consultants are sometimes asked to join these sessions. Ideas are jotted down on art boards, roughly or in great detail; often the participants do not take time out to sleep. Then the head product manager chooses from among the ideas and takes a proposal to top management for consideration. When the proposal meets the requirements of budgeting, factory capacity, and other practicalities, the go-ahead for production is given.

Most Philips and Magnavox CD players and changers, CDV and videodisc players, and even prototype CD-i (interactive) components are manufactured at a factory complex in Hasselt, Belgium, as are many components that Philips makes for other manufacturers. Roughly three-quarters of the plastic and metal parts, electrical subcomponents, circuit boards, and special 1C's used are produced by Philips itself or by its contractees; the others are imported from Southeast Asia. Every single component from a new outside supplier is tested, according to one Hasselt manager, until "we're convinced it can be trusted."

The actual production process of a CD player can be broken down into four steps. First, the laser and its associated parts are inserted into an "arm" assembly that is capable of tracking along a disc. Then this assembly is attached to a housing called the "CD mechanism," or CDM, which includes the sliding disc drawer; the Hasselt plant currently uses a fourth-generation CDM. The process of making CDM's has become so refined that the defect rate has dropped from 10 percent to 1 percent in the last three years; it's expected to plummet into the tenths of a percent in the next few years.

Meanwhile, components are being plugged into circuit boards at a fast clip. In the last step, the CDM's and circuit boards make their way to Hall A, a productionline work area where workers assemble the various parts on the player chassis. Front panels are attached, connections are soldered, a metal top plate is secured, and the finished player rolls down the assembly line to the packing stations.

Of all the critical work that's done in the Hasselt plant, the production of the laser-arm assembly is the most critical. As with most hightechnology products, some of the work that goes into a CD player is performed by people, and some is automated. Insertion of components into the circuit boards, construction of the CDM, and packing the finished player are completely or mostly automated; the laser-arm assembly is largely produced by hand.

This process takes place in a "clean room," which is maintained at 21 to 22° C (70 to 71° F) with 49 to 50 percent relative humidity. Like clean-room workers in other high-technology factories, the workers in the Hasselt clean room are mostly female. A Hasselt manager says that women are simply capable of "more accurate, precision work" than men. (Male employees at the production level are involved mostly in the operation of the heavy machinery used in the plastics and metal departments.)

The laser-arm assembly itself consists of a low-power aluminum/gallium-arsenide laser; electronic servomotors to focus and stabilize the laser beam; a low-inertia pivoted arm to hold and move the laser; and a floating suspension system to minimize the effects of shock.

One other department deserves special mention. Roughly 300 miles west of Hasselt, in Southampton, England, the integrated-circuits division of Philips Components designs, manufactures, and tests the chips that are used in all Philips-made digital products. Combined with what I saw at Eindhoven and the work being done at research centers elsewhere, the Southampton facility demonstrates that Philips is at the cutting edge of integrated-circuit technology.

And there's no underestimating the importance of that point. Basic research and "vertical integration," or the in-house production of vital components, have been a large part of the Philips plan since the second decade of this century, when the desire for knowledge of the unknown and the sober acceptance of a politically unstable world inspired Gerard Philips to make two visionary moves: He employed a renowned physicist to open an in-house laboratory, and he himself opened three new factories dedicated to supplying his primary lamp factory with essential materials.

The research continues today, of course. For instance, the new "Bit Stream" technology, expected to be incorporated in Philips-built players by 1990, may turn traditional concepts of the digital encoding/decoding process upside down, with only one bit at a time being converted into an analog signal. One thing's for sure: The "design tracks" for these players are already in full swing. 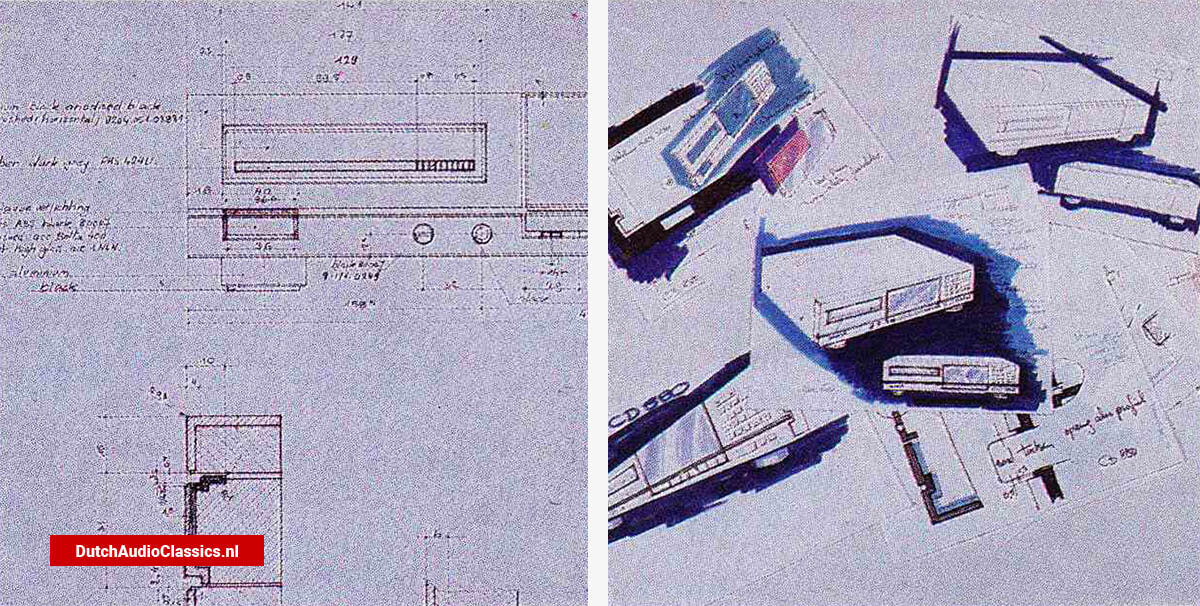 Before the Hasselt plant's workers go about constructing a CD player, it has lt be designed. Philips insiders call this process a "design track": Representatives from the technical, design, marketing, and production groups meet -sometimes along with outside consultants- to hash out ideas. At this time, the Corporate Industrial Design group produces a variety of sketches, such as these for the Philips CD880 player. 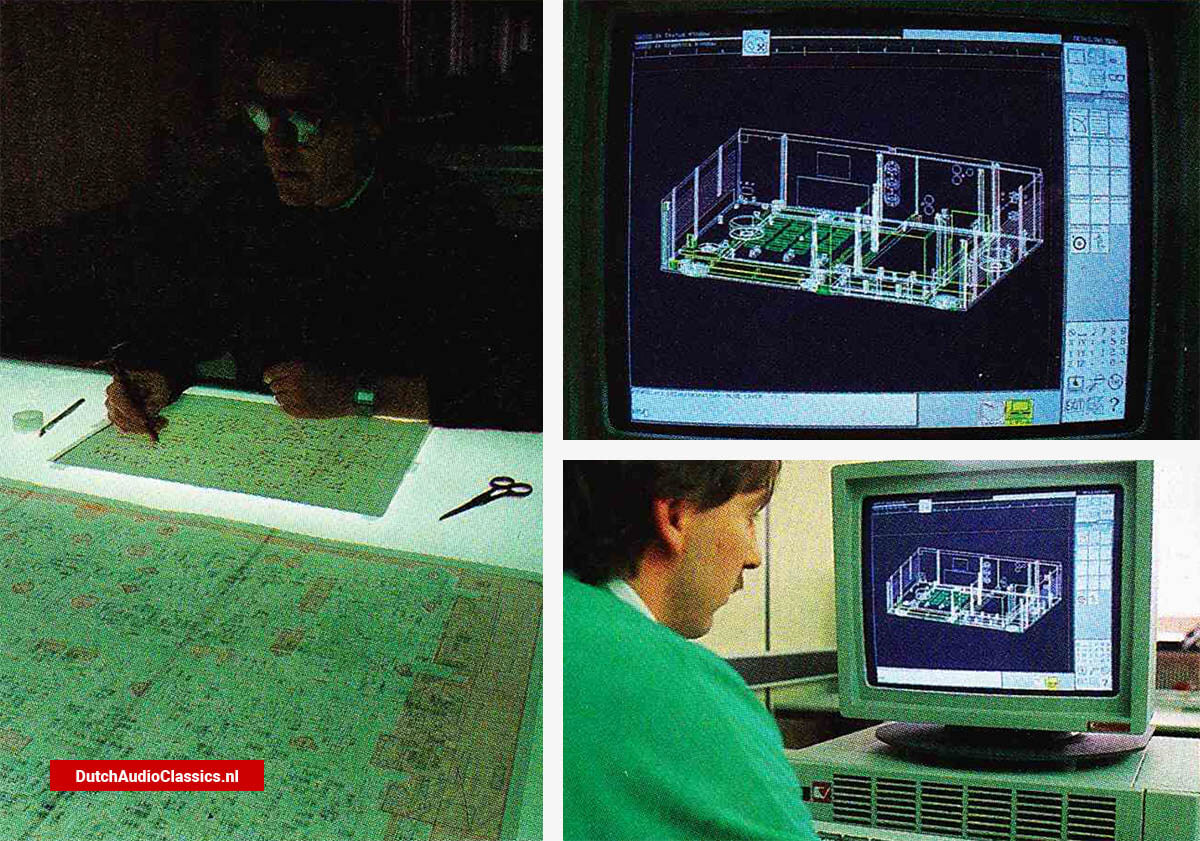 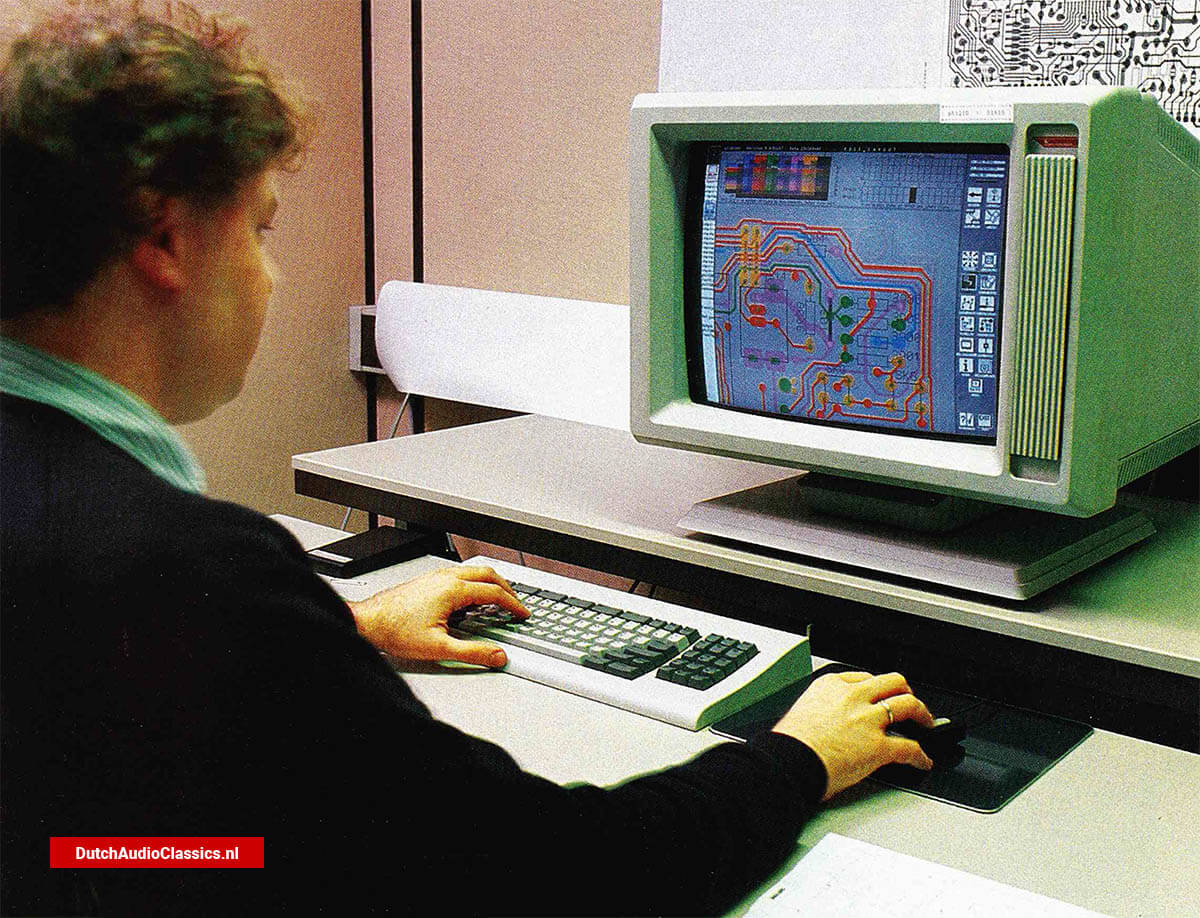 Computers play a vital role in the design of a CD player. In the computer-aided design (CAD) lab in Hasselt, technicians use "visuals" and printouts of a circuit board to trace circuit path and determine the positfoning of electrical and mechanical components. The CAD technicians work on "externals," too. Computer-generated 3-D representations of a proposed CD player are used to visualize changes mandated by the design group, including such things as rounding the corners of the chassis for new "European style" players. 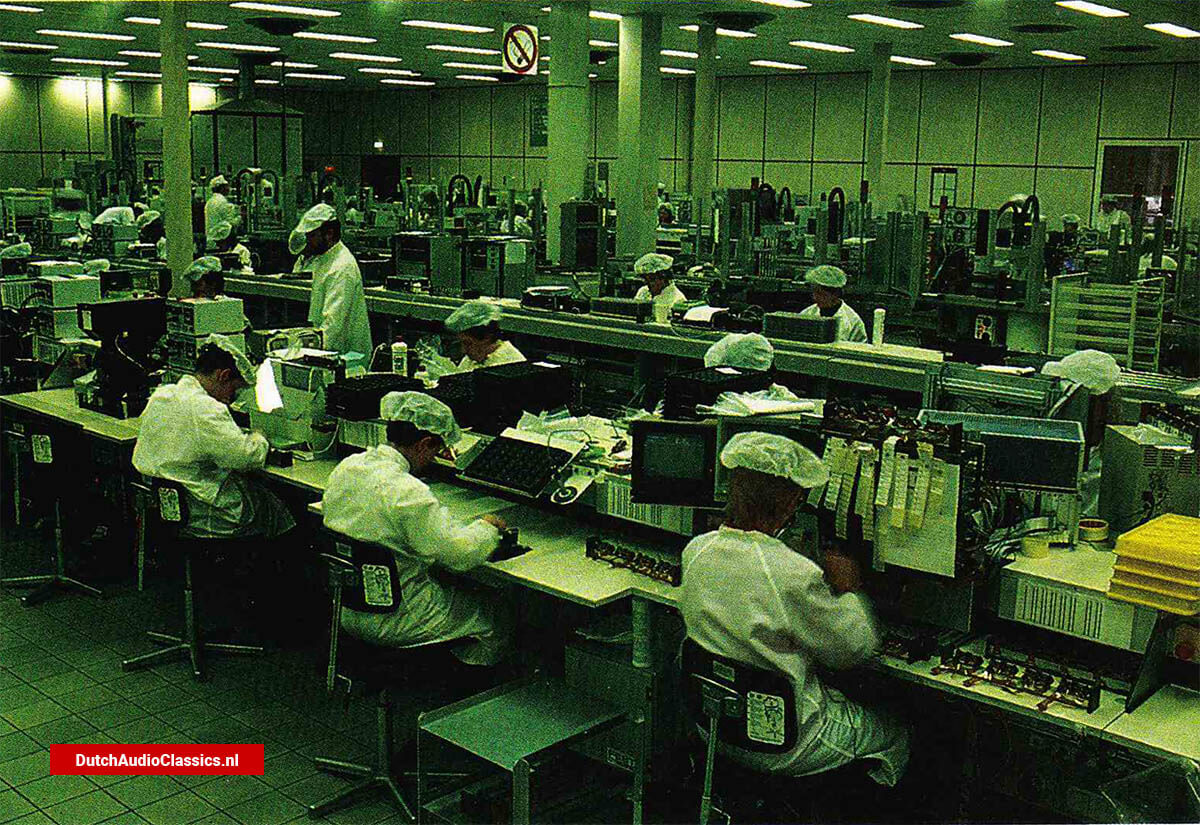 Workers in Hasselt's "clean room" build by hand the most critical part of any laser-read-disc player: the laser-arm assembly. 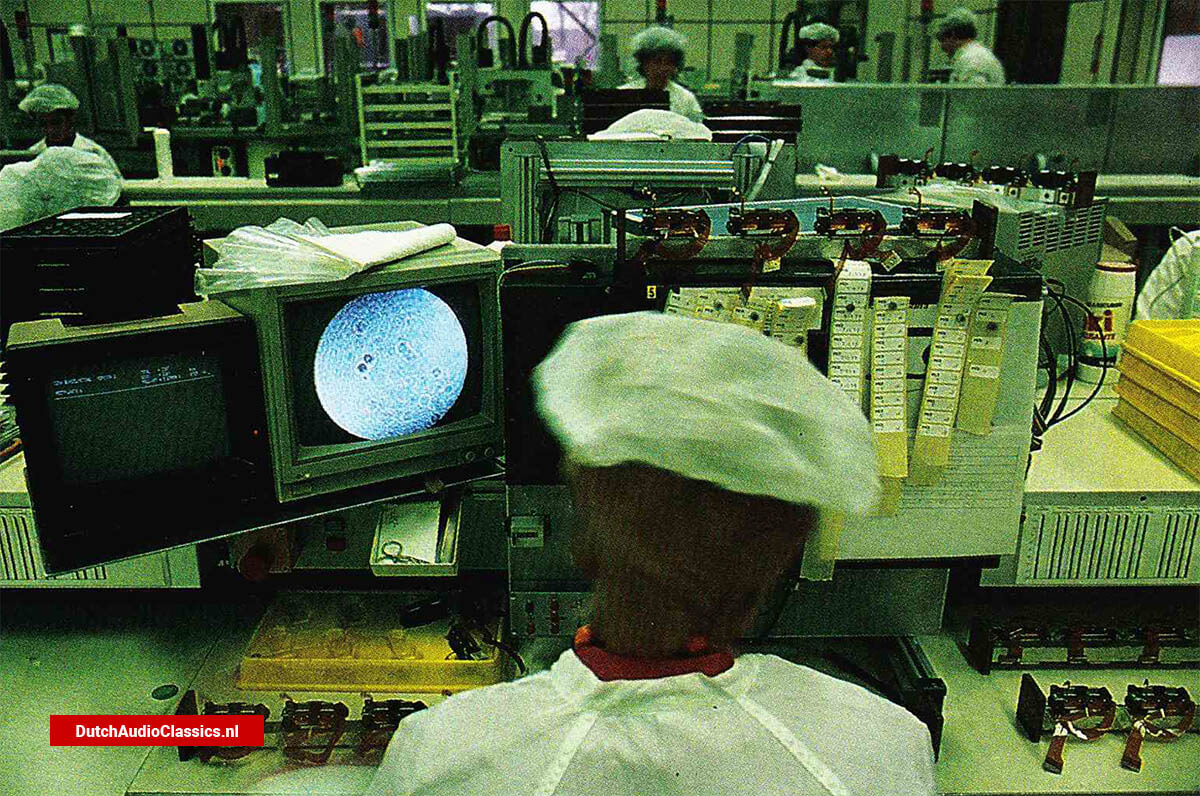 After the laser and its associated parts are attached to the swing arm, the optical pickup is aligned and the alignment is checked over the full course of disc tracking.

Testing a CD mechanism (CDM) -which includes the laser-arm assembly, the assembly housing, and the sliding disc drawer. The CDM's shown are for combi-players, which play videodiscs and CDV'S as well as CD'S. 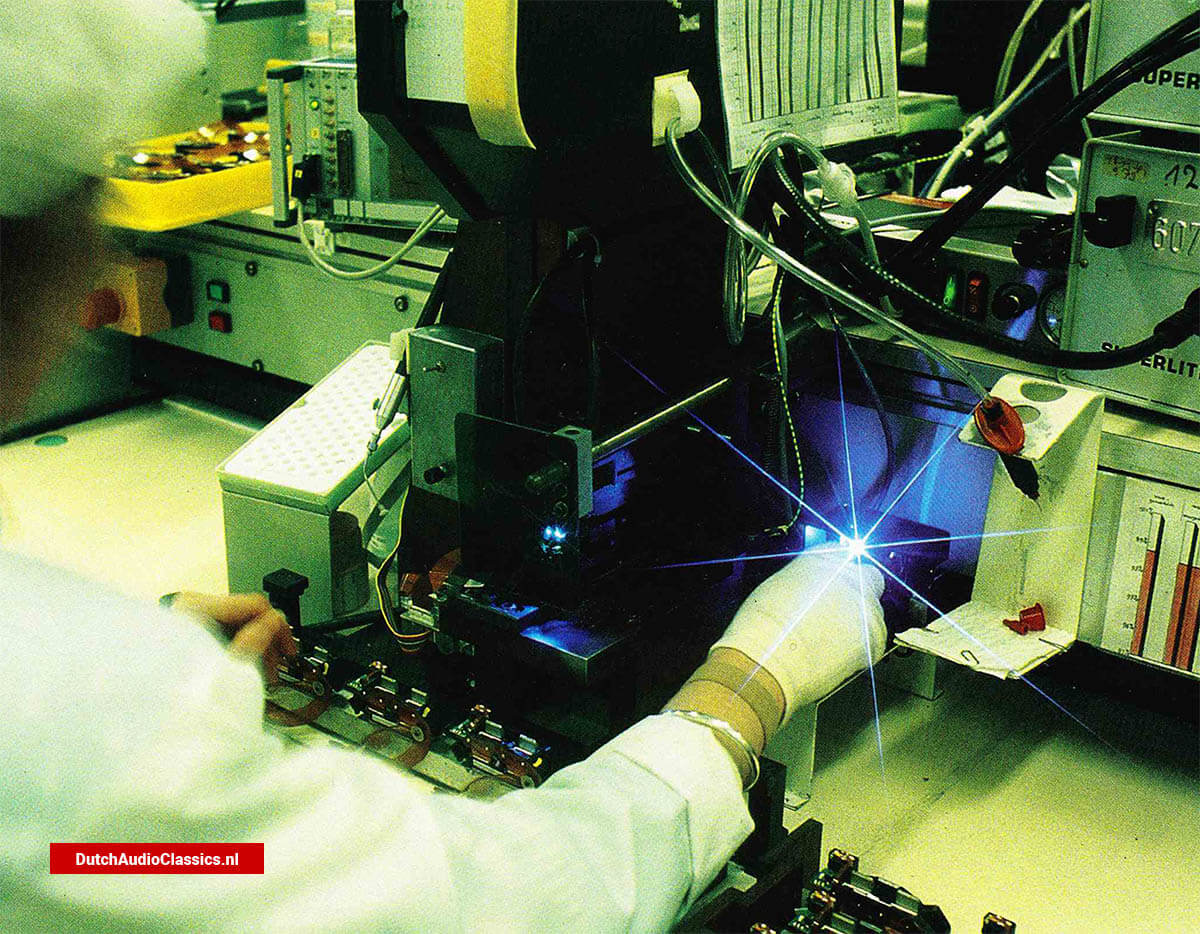 Because of the fragile nature of lasers, one clean-room work station is set aside just to check and adjust the lens assembly of the optical pickup. In some cases. realignment is ineffective and the assembly is rejected. 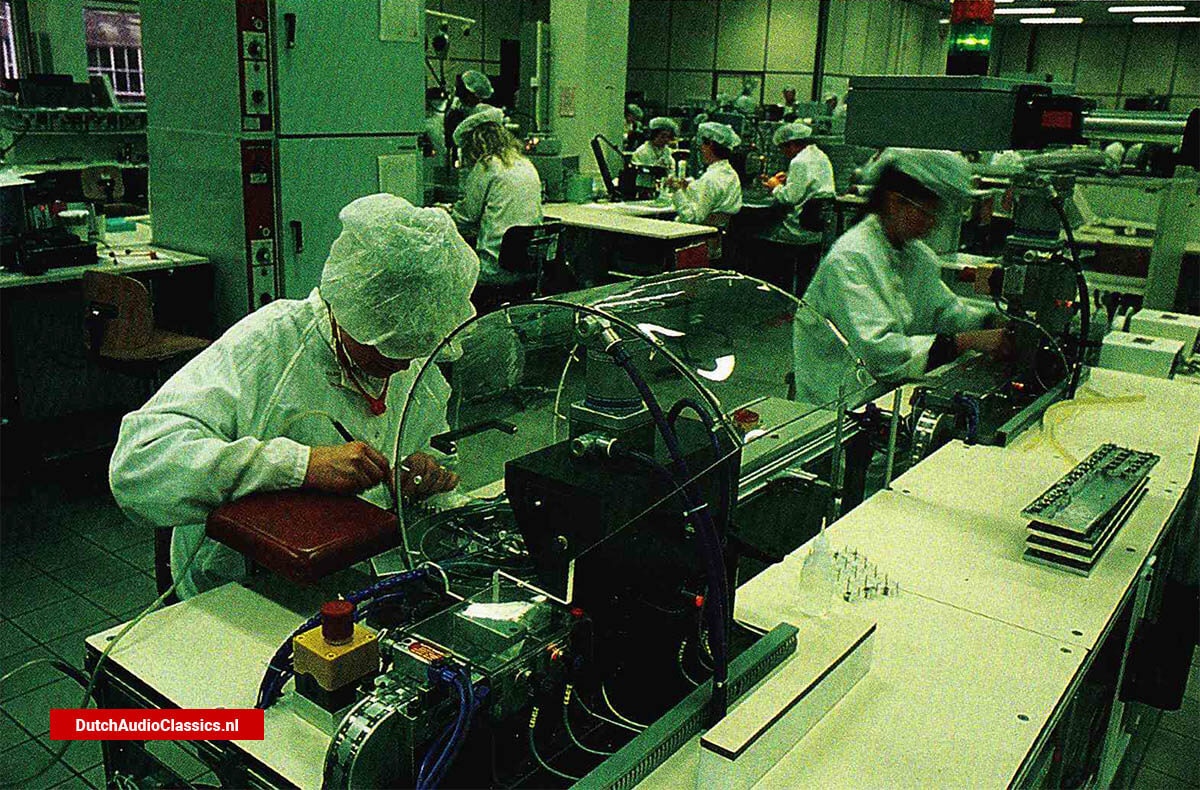 The laser-arm assembly is secured to its housing and isolated with a leaf-spring suspension system to minimize the effects of shocks to the player chassis. 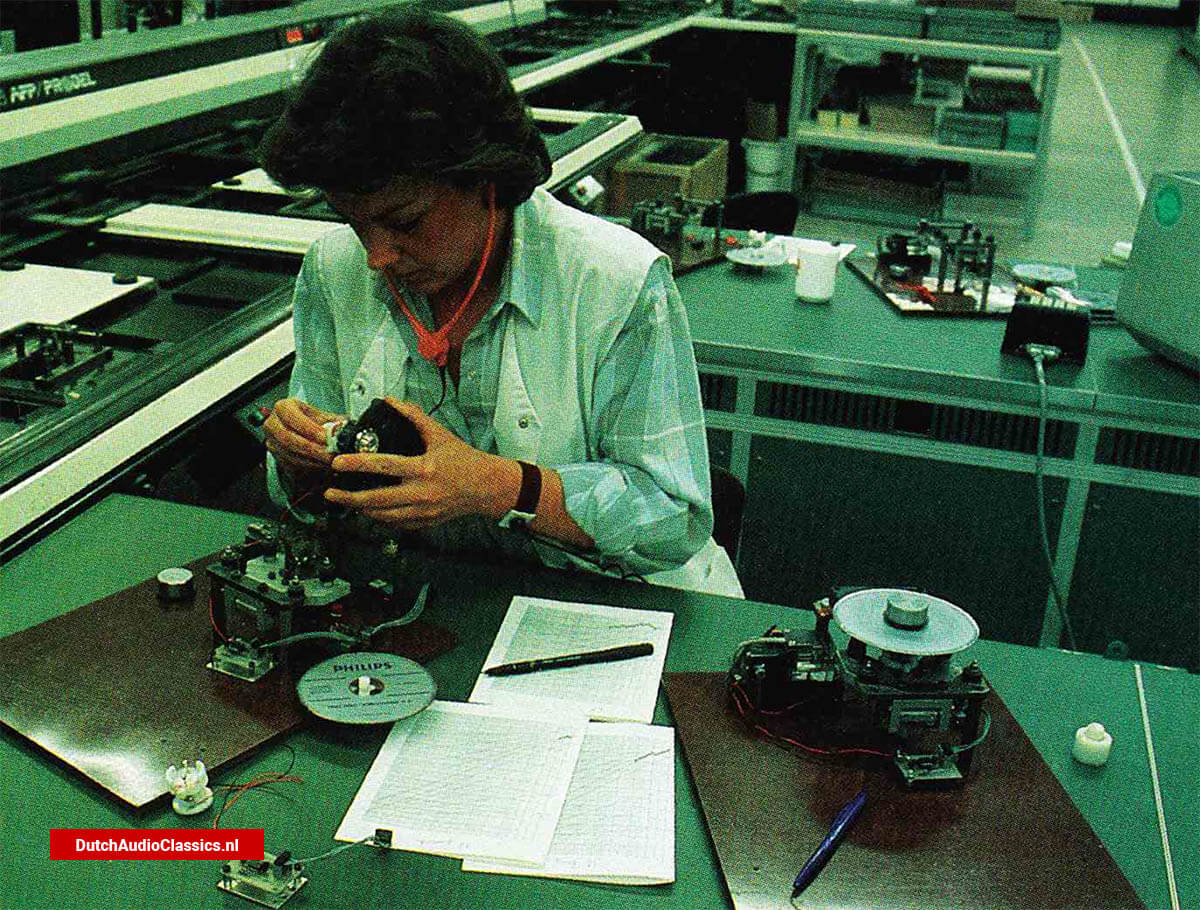 Defective laser-arm assemblies and CD mechanisms are removed from the production line. Technicians attempt to spot the source of the defects manually and determine whether any of the components can be salvaged. 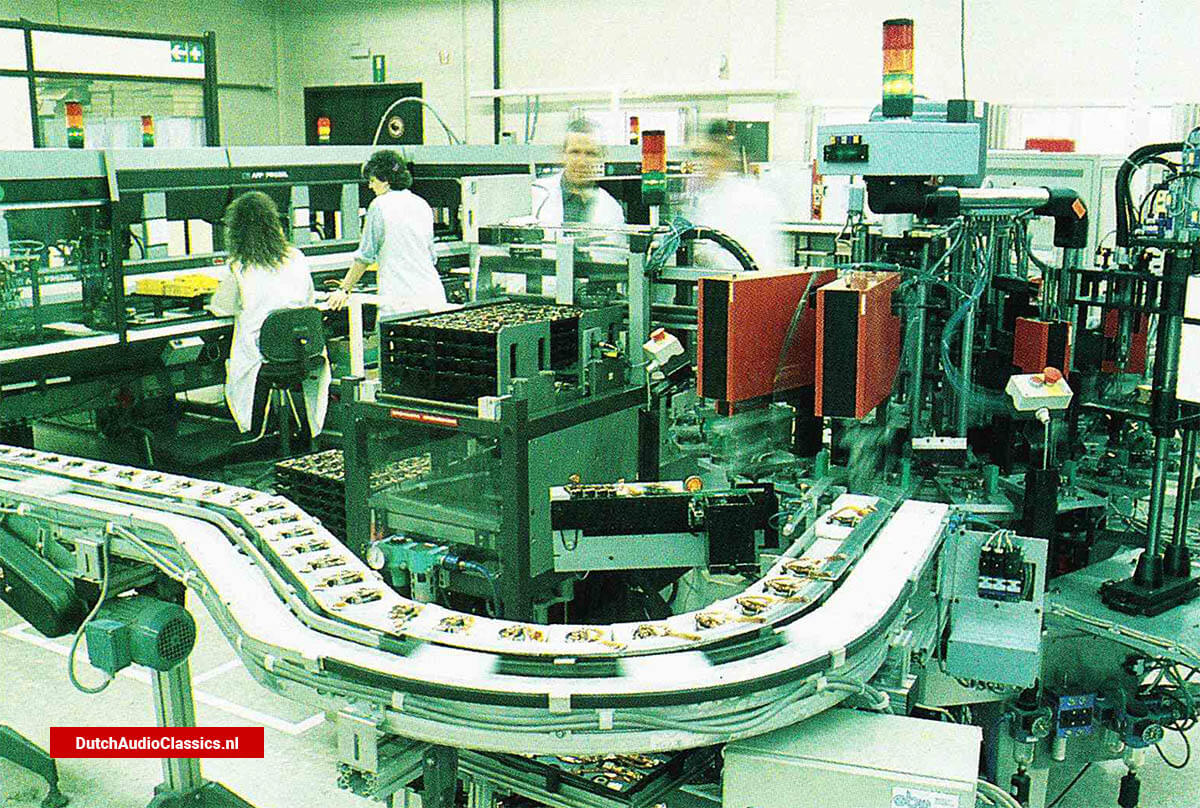 A conveyer belt is used to deliver assembled swing arms to the CDM production line. As with the laser -arm assemblies and CD mechanisms, the swing arms are checked by technicians and repaired when possible.

Pre-cut circuit boards that have been filled with flat- and vertical-mounted electrical components by an insertion machine are sent to the solder bath for soldering. A technician checks the boards to insure that each component is secure and adds any that are too large or fragile for the insertion machines to handle. 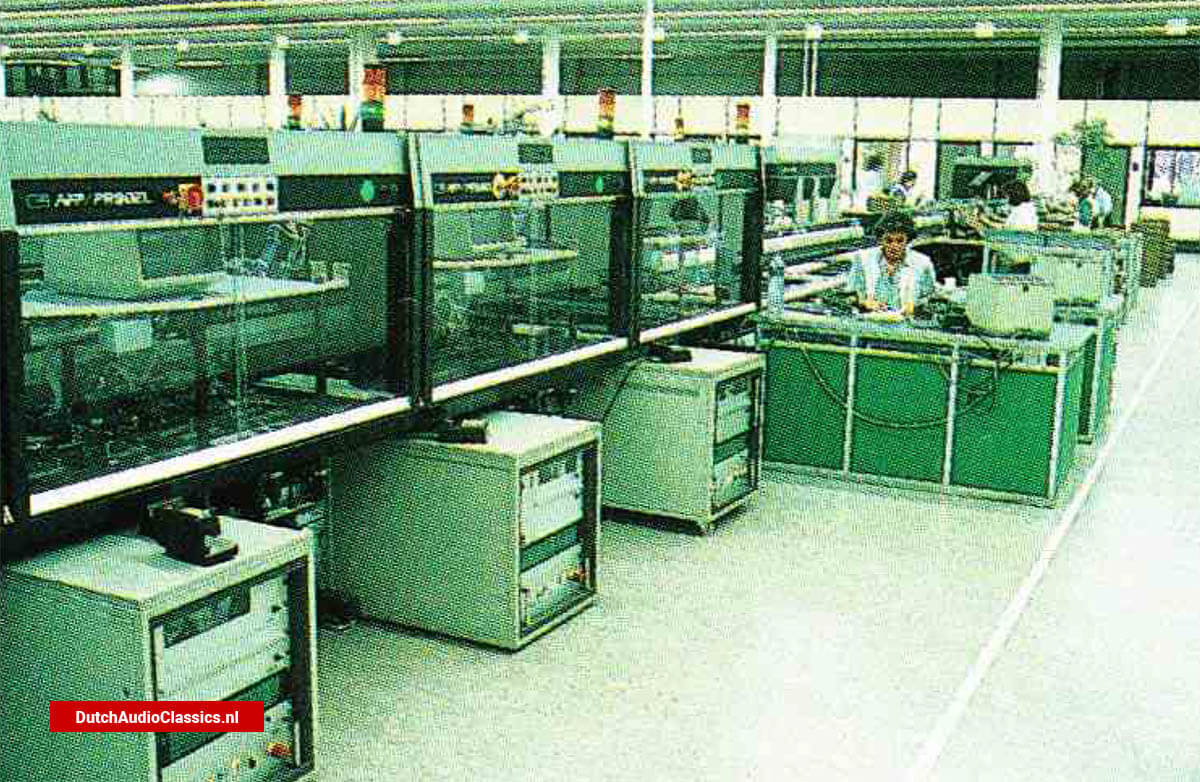 After the laser-arm assembly, its housing, and the CD mechanism are completed, they move to this area for final inspection and testing. 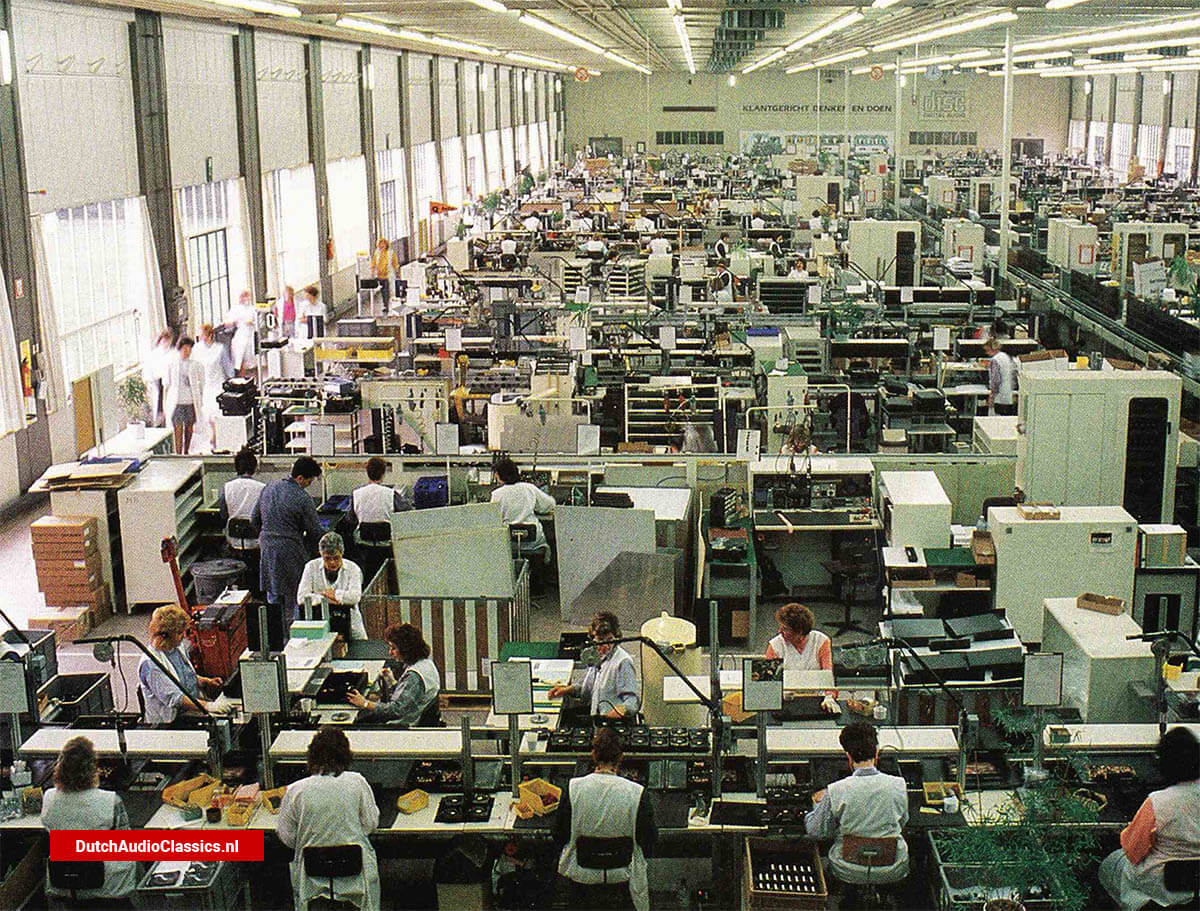 Everything comes together in Hall A. Finished CD mechanisms, circuit boards, power cables, and faceplates are assembled on chassis that have been coated with electrostatic paint.