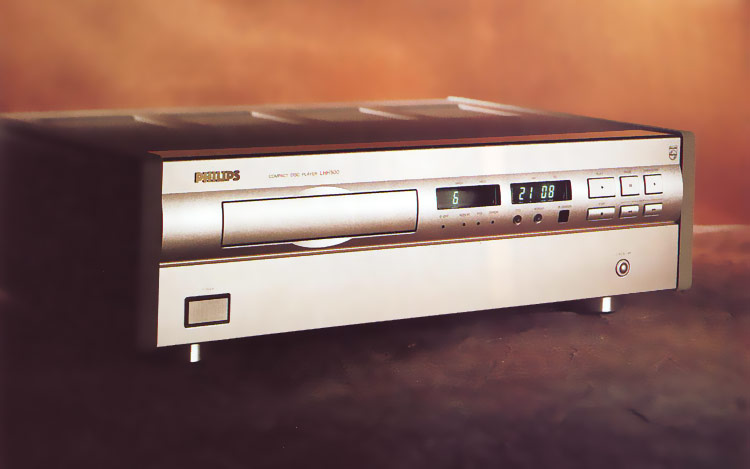 According to Philips, the LHH designation is applied only to the company's most technically sophisticated consumer and professional components. For example, their flagship consumer model CD player, consisting of a separate transport and D/A converter, bears the model number LHH1000. In the professional audio area, the LHH8000 is a Compact Disc manufacturing system that occupies only 2500 square feet of floor space but can turn out completed CD's -from formatted master tape to finished discs- in about six hours.

The Philips LHH500 was only the second CD player offered to consumers that bears the LHH designation. I expected, therefor, that it would be special. In many respects it is; in some respects it is not. The LHH500 employs Philips bitstream PDM (Pulse Density Modulation) D/A conversion technology. The player uses not two, but four D/A converters. Two converters pairs operating in differential mode are said to provide an increase in signal-to-noise ratio of about 4 dB compared to single converter-pair operation.

In the LHH500, two PDM D/A converters are used per channel. Each channel's digital data stream is split in two, and one of the resulting streams passes through a bank of flip-flop circuits, which inverts it digitally. The inverted and noninverted data streams pass through separate D/A circuits, whose outputs are then combined. This results in a gain increase of 6 dB, and a noise increase of only 2 dB, for an overall 4 dB increase in dynamic range. The analog outputs of the two converter pairs are then fed to op-amps, combined, buffered, and, when necessary, de-emphasized. Outputs include both unbalanced RCA and transformer-couples, balanced, XLR analog jacks and both optical and coaxial digital types.

Control layout
The LHH500's "power" switch and motorized disc tray are in the usual locations. To the right of the disc tray are two separate display areas, one that shows track and index numbers and another display that displays minutes and seconds. Beneath the first display are four small indicator lights that show when the display is off, when a repeat mode has been engaged, when FTS is being used, and when an error in programming has taken place. The FTS and Repeat pushbuttons are located beneath the second display.
Further to the right are the buttons handling Play, Pause, Stop and track Skip (forward and backward). A button for opening or closing the disc drawer is also located here. Finally, at the lower right corner of the panel is a button for turning the dispay on and off.

Measurements
Figure 1 shows the frequency response of the CD player. A small difference between channel output levels, amounting to about 0.25 dB at the middle frequencies, is noticabe, as is a slight ripple in response near the high end of the spectrum. I have seen this sort of ripple before in another CD player employing the Philips bitstream D/A technology. While it is of little concern to me in terms of audible effect, i wonder why this occurs and why i don't see it with CD players that emply other forms of one-bit D/A conversion.

Figure 2 is a plot of THD + N versus frequency for signals recorded at maximum digital level. At the middle frequencues, THD + N measures no more than 0.003%, while at 20kHz, it increases to 0.032%. Figure 3 is a plot of THD + N for a 1-kHz test signal, with dB readings referred to 0 db, or maximum recorded level. Even at this high level, THD + N measures 90.8 dB below maximum recorded level, corresponding to a THD + N percentage of 0.0029% and correlating almost perfectly with the results shown in Figure 2 for a 1-kHz signal. 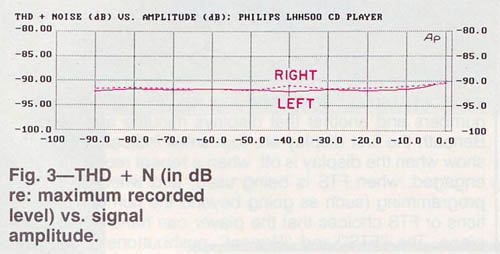 Figure 4 shows an FFT spectrum analysis of a 1-kHz, 0-dB signal taken at the player's analog output. The most significant, albeit minute, harmonic components visible are at 9 and 13 kHz. Computing their net contribution to actual THD (noise has been 'averaged' out by sampling the data 16 times) results in a figure of 0.003%. Measurement of SMPTE-IM distortion at maximum recorded level resulted in readings of 0.0043% and 0.0045% for the left and right channels, respectively. 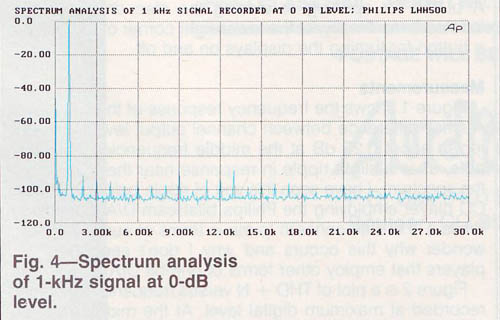 I also performed a spectrum analysis (not shows) of a 10-kHz signal reproduced from my CBS CD-1 test disc. There was only 0.021% second harmonic, but other spurious out-of-band components, caused by 'beats' between the CD clock frequency and the 10-kHz signal (at 34.1 kHz and 54.1 kHz, for example), measured as high as 0.05%.

A weight S/N for the LHH500 measured 97.7 dB for the left channel and 96.7 dB for the right channel. A 1/3-octave spectrum analysis of noise versus frequency is shown in Figure 5. Other than the expected slight rise in noise at high frequencies, the only significant noise 'peak' occurs at 120 Hz, the second harmonic of the power-line frequency. That peak, however, measures an insignificant -107dB on the left channel and -105dB on the right channel, referred to maximum recorded level of a CD. Channel separation (Figure 6) is excellent, in excess of 100dB at 1kHz and more than 90dB even at 20kHz.

Figure 7 shows deviation from linearity for both dithered and undithered test signals. With undithered test signals in the range from 0 to -90dB, linearity is excellent down to -80dB, but at -90dB it deviates by 3.4dB in the right channel and 4.1dB in the left. For dithered signals, the results at -90dB are similar, and linearity actually improves slightly at -100dB. In theory, bitstream and other one-bit D/A converters are supposed to take care of such minor nonlinearities, and the nonlinearities observed here may well be caused by factors other than D/A conversion, such as self-dither noise introduced by the player itself. 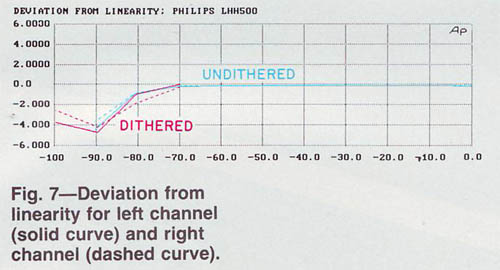 Figure 8 is a plot of the fade-to-noise test, using a dithered signal fading from -60 to -120dB, as a further assessement of linearity and as a means of establishing the levels is fairly consistent with the readings in Figure 7, and EIA dynamic range was estimated to be about 106dB. Measured according to the EIAJ method, dynamic range was 92.3dB for the left channel and 91.5dB for the right channel. A test using a unit-pulse signal (not shown) revealed that this player maintains correct polarity at its output terminals. Clock frequency accuracy was within 0.0008%.

Use and listening tests
Having tested several CD players that employ one form of one-bit D/A conversion or another, i am convinced that this technology (wether you call it bitstream, MASH, High Density Linear Conversion, or whatever) hsa much to commend it sonically. In playing CDs on this unit, i was impressed by the complete absence of a harshness that i had previously blamed on some of my earliest-acquired CDs. Others have told me that, with some of the better current-generation CD players, their oldest CDs suddenly didn't sound nearly as brittle and raspy as they had remembered. With players such as the Philips LHH500 and a few others that i have tested in the last year or two, i was able to confirm these claims myself.

I still won a first-generation portable CD player and a fairly low-cost second-generation home CD player -both circa 1985 or thereabouts. Let me tell you that the same 'old' CDs played on the LHH500 sounded a lot better than they did on my early CD players. From some later CD releases, i chose a couple of Delos recordings that i have used before, simply because i find that when listening to chamber music i am more easily able to separate the superb equipment from the merely excellent and the excellent to from the just adequate. Listening to the Mozart Quintet in E Flat for Piano and Winds, or to the Brahms Quintet No. 2 in G for strings, as reproduced by the Philips LHH500 and the rest of my reference system, represented pure joy, as i forgot about the equipment and was completely captivated by the music. That's one thing about superior equipment such as this -you tend to forget it and to concentrate on the music.

Returning from the sublime to the practical, i made my final check to see how the unit behaved in the presence of severe disc error or missing data. Using the Pierre Verany test discs designed for this purpose, i literally could not believe my oscilloscope! (i not only listen to these test tones for glitches but observe them on a scope, because sometimes a minor glitch or mistracking is observable even though it is inaudible). The LHH500 was able to play through areas of this test disc in which there was missing data for a full 3mm of scanning distance. Being abe to correct for 1mm of missing data is considered very good, 2mm is excellent, so i don't quite know how to characterize this amazing ability of the LHH500 except to say that this is a near miracle. Furthermore, i was able to literally pound on the outer case of this solidly built machine with my fist without making the laser pickup mistrack -at least not so that i could hear any glitches or even momentary muting. Before i tested the LHH500, a Philips spokesman suggested i hold a block of wood against it (to protect its lovely gold-colored finish) and pound on that block with a ballpeen hammer. I couldn't quite bring myself to go to that extreme, however -such is my respect for this beautifully built, feature-laden player from a co-inventor of the optical laser-read CD system.
Leonard Feldman - Audio / April 1992