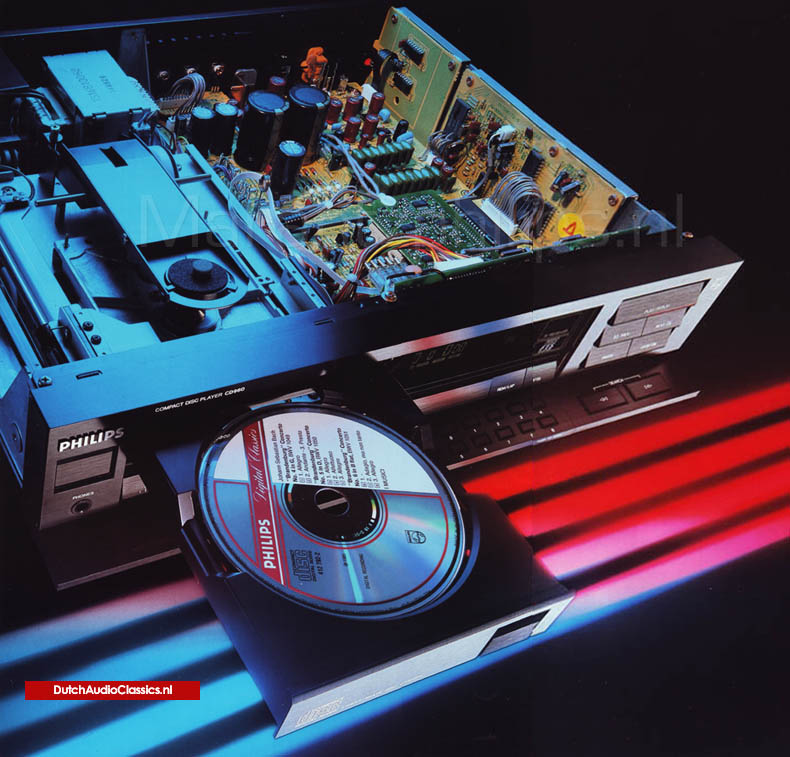 Ever since their joint development for the CD format (with Sony) Philips have maintained a dominant position in the sales figures for CD players here in Europe, even if we leave out the numerous other brand names (Mission, Meridian, Marantz and others) which use the Philips chassis and mechanism. They have, however, tended to concentrate their efforts towards popularising the CD medium through a series of low-cost and rather feature-lacking players such as the CD104, CD150, etc.

This new Philips CD960 model, coining in at a higher price bracket (L699.00), is a deliberate bid for the more esoteric end of the market and indeed it challenges the few top machines (costing up to £2,000) in terms of both sound quality and operational versatility. Of course it employs the 16-bit, fourtimes oversampling circuitry which has raised the technical specifications of all the recent Philips players (see, for example, our reviews of the CD450 and CD650 in August 1986 and the CD160 in February 1987). Again, of course, it has the Philips speciality gimmick, FTS (Favourite Track Selection) which memorizes all the individual track numbers you have earmarked on your discs and selects these whenever you put the disc back in the player. FTS first appeared in the CD650 and has proved so popular (say Philips) that they are even moving it down market in their just-released up-grading of the CD 160, the CD360 (L249.00).

Contributing to the flagship image of this new Philips CD960 is its battleshiplike construction (though I must admit to raised eyebrows when I came across a "Made in Japan" label on the back panel). It weighs an above average 10kg and the widespread use of plastic materials in the cheaper models has given way to a die-cast chassis and high-quality transport components. The disc drawer glides in and out at almost aggressive speed, and that is not the only thing that glides. As the photograph shows, a second drawer near the centre of the projecting front panel opens to reveal a grouping of the less often needed controls. These include the Store, Review and Clear buttons associated with programme sequence building (up to 20 items), Index number, forward and back skip keys, a Scan button for automatically sampling the first 10 seconds of each track in turn, Repeat button and an associated A-B button for marking chosen begin and finish points for repeat play of a musical 'loop', and a Mode switch which selects Normal Play, Single Play (play stops at the end of the current track), Copy Pause (a four-second pause is inserted after each track—to be used "when recording", to quote from the booklet which gives instructions on recording from the player, but warns users in the UK that this "may require consent"), and Auto Pause (play stops at the end of each track until Pause is pressed).

On the front of this slide-away control drawer are the 0-9 numbered buttons and a Select key to be used for track selection. The remaining control keys are all fairly routine, with the addition of the FTS key aforementioned. There is a standard headphones jack-socket with slider volume control (but sadly no control on the main output volume). The display panel is quite comprehensive and there is switching between the usual Track elapsed time display and total time remaining. The fast search function has three speeds, the slower two giving audible cueing, depending on how long the button is held down. After careful reading of the ninelanguage booklet it is possible to perform even more elaborate routines such as starting from a chosen time cue, or storing specific start and stop time cues. The cordless remote control unit duplicates all the important functions and gives a fine sense of power, with fast cueing and numerous confirmatory legends blinking back at you from the display panel. On the back panel, in addition to the standard pair of phono analogue output sockets, there is a digital outlet (for sending to an external digital pro cessor or future developments such as CD-ROM), remote control sockets (for connecting an alternative control unit) and an optical outlet (for digital processing via a fibre optics connector).

Performance
I continue to conduct measurements on every CD player that reaches me, even when the claimed and measured specification details differ only microscopically between one player and another—and such differences as exist in the subjective sound quality relate more to subtleties in the signal processing in the time domain and the varying effectiveness of the error concealment arrangements.

Thus the frequency plot is so straight-line as to defy the human eye and ear to fault it, yet my laboratory blow-ups reveal this Philips Philips CD960 to be a considerable advance on their own early 14-bit models (where high-frequency ripple can be detected) and many non-oversampling players (where there is a noticeable high-frequency droop). Similarly, I have had to go 10dB further down in scale to show the Philips CD960 crosstalk response which remains below the — 100dB line over the whole spectrum. My results table also shows signal-to-noise ratio at an excellent 104dB unweighted and distortion at an inaudible 0-0025% (at full level). The square-wave response showed the usual oversampling filter symmetry with no overshoot.

Mechanically this player is equally impressive. Mechanical noise during play is very low at all times and the ability to track through external knocks or feedback is of a very high order. Access time is speedy at around two seconds between cues, and the facilities for slick disc-jockey style operating are about ideal.

Laid back
Having admitted that subjective quality differences are generally subtle, and not usually related to anything so obvious as the measured frequency response, I soon came to the realisation that the Philips CD960 surpassed even the pleasing standards we associate with earlier Philips models. The overall quality is in a way unspectacular and laid back, but extended listening identifies a degree of neutral naturalness which I always look for in musical signal sources. The full frequency range is covered but without undue emphasis and the depth of perspective on well recorded choir and orchestra, for example, is very impressive. Dynamics are handled without any feeling of strain, whilst solo voices and instruments have that in the room with us' effect.

If you go shopping for this player, allow time for a lengthy demonstration and you will hear what I mean. This is high fidelity.