November 1972
Imagine a record album that will play non-stop for an hour, is small enough to fit in a coat pocket, never wears out or deteriorates with abuse, and, best of all, produces music that makes a brand-new direct-to-disc LP sound like a worn-out 78. An audiophile's dream? No, it's a new type of audio player that combines computer and laser technology to make beautiful music.

The demonstration prototype of the Philips Compact Disc player looks rather plain for the forerunner of an audio revolution. The controls parallel those of a regular record player except for the search controls.

Now, don't throw your supensonic, direct-drive, semi-automatic, wonder turntable in the garbage just yet. It has still got quite a few years to go and it will probably never be completely replaced. The new system, called Compact Disc (CD) by its developers N.V. Philips of Holland, is not yet available to consumers.

The technology involved was first developed by Philips for the new TV video disc players which have been on the market since late last year. The picture and sound information are digitally recorded on the disc by billions of small pits and spaces that represent binary zeros and ones. The binary codes are then translated to an analog voltage level. When these tens of thousands of sequential voltage levels are detected every second you have a signal that can carry audio and video information. The video discs are about the size of a standard LP while the Compact Discs, for audio only, are only 41/2 inches in diameter since they don't need to carry as much information.

What is outstanding about the CD system is the sound quality. The dynamic range and signal-to-noise ratio are 85 dB as compared to 60 dB for a good quality LP, channel separation runs a phenominal 80 dB while an LP is hard pressed to get much more than 30 dB. With pre-emphasis the S/N ratio can go as high as 92 dB, according to Philips.

Surface noise is nonexistent since there is no physical contact between the disc and the player. The binary pits are read by a photodiode that detects the presence or absence of light reflected off the pits from a low-power laser diode.

Unlike regular players the pickup head starts near the center of the disc and moves out to the rim. The disc rotates at 500 RPM and slows to 215 RPM as the laser moves towards the rim. This keeps the binary data rate constant without having to change the spacing between pits.

The technique used to store and play the musical information is called Pulse Code Modulation (PCM). Forty-four thousand, three hundred and thirty times_each second the player reads a 14-bit binary number. This 14-bit number can represent any decimal number from zero to 16,383, and each of those numbers represents a positive or negative voltage level, with 8,192 being zero volts. It is this large number of possible signal levels that allows the large signal-to-noise ratio. Since the sampling rate is at a higher than audible frequency the transitions don't create any audible distortion. 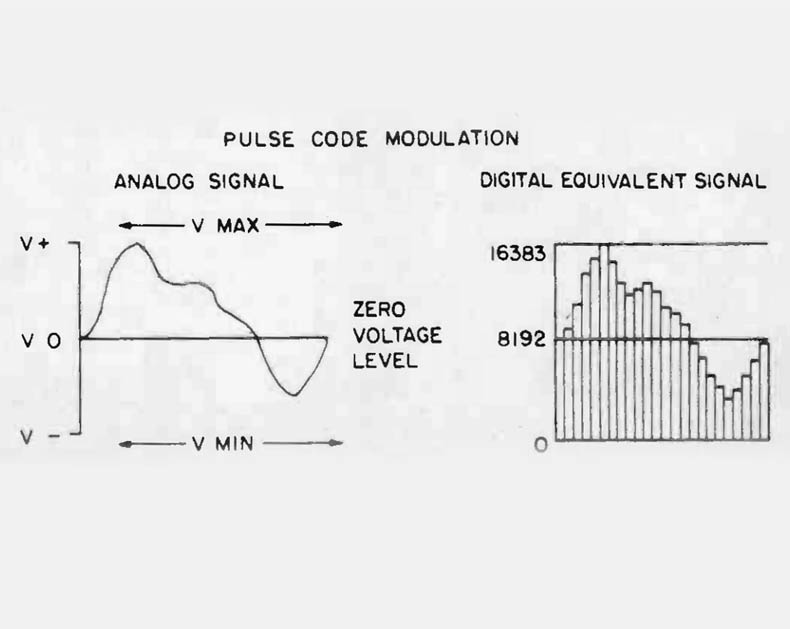 To understand PCM compare the chart on left with the one on the right. As the analog voltage level changes with time, level is sampled and converted into a binary number. Here, binary equivalent of 8192 represents a zero signal level.

The player that was demonstrated was an early prototype with its circuits breadboarded. Eventually Philips plans to put most of the circuitry on a integrated circuit chip. The drive unit and laser heads were in the display chassis like the one in the photographs. It appears that all that is needed is to get the details finalized and into production.

Hi-fi will never be the same again

Once this happens Philips will begin offering a long list of classical, popular, rock, western and jazz recordings. They are already one of the worlds largest producers of traditional record albums. Keep on the lookout for these ma- chines. Once they hit the market place, hi -fi will never be the same again. While the initial use will be for home systems, it's easy to see how CD players could be used in cars, or even portables since the pick-up head is under positive control, not dependent on gravity and sliding styli.