The Philips Digital Compact Cassette was introduced in 1992 at the same time as the Sony MiniDisc.

The sales and marketing hype was that it was backwards compatible with the popular and established analogue cassette tape. Although the two types of cassette construction where very different, the basic physical size was similar allowing the DCC player mechanism to accommodate the older analogue cassette for playing in the DCC players. The DCC system had a very impressive technical specification and provided CD audio quality recording and playback. But the public expected "instant audio track access" on high technology digital products (as the optical CD and MD) and the DCC "tape format" was seen as past and outdated technology and had very poor general customer appeal.

It was Philips plan for DCC to be the successor for the 1964 analogue cassette tape, but it turned out to be a multi million pound blunder, but a great lessons learned for the whole audio industry.

Production of the DCC machines ceased on the 31st October 1996 when Philips finally accepted that this digital tape format had no hope of success just four years its introduction.

The DCC 951 was essentially identical to the DCC 730, except it was designed to interoperate with other 900-series of Philips audio components, and therefore incorporates an additional bus for communicating to other 900-series units. 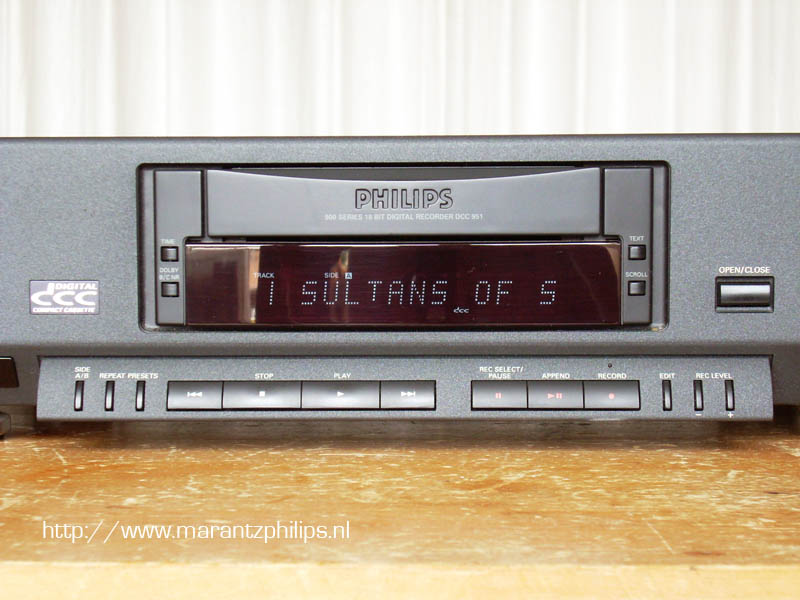 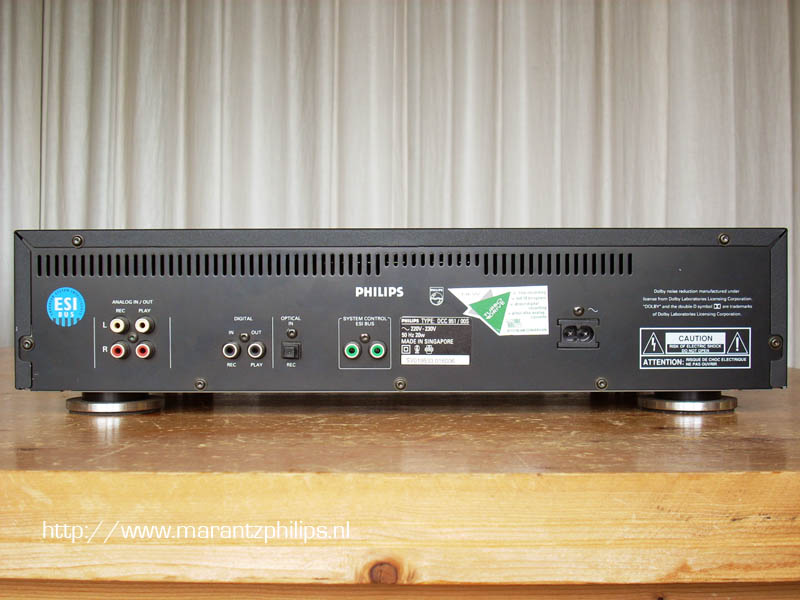 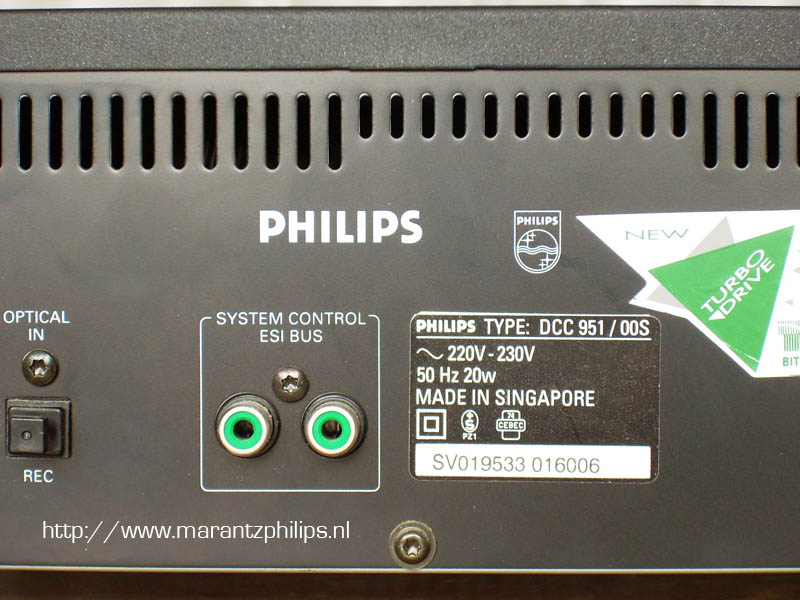 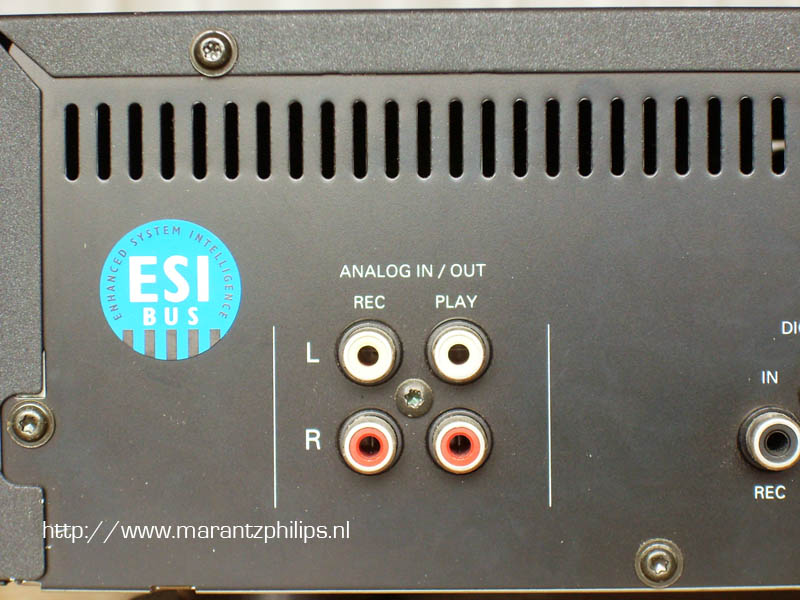 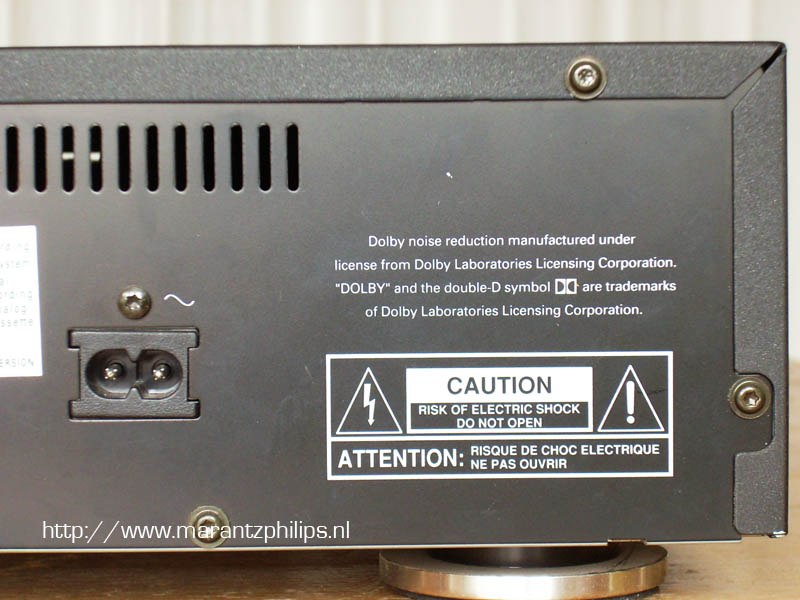 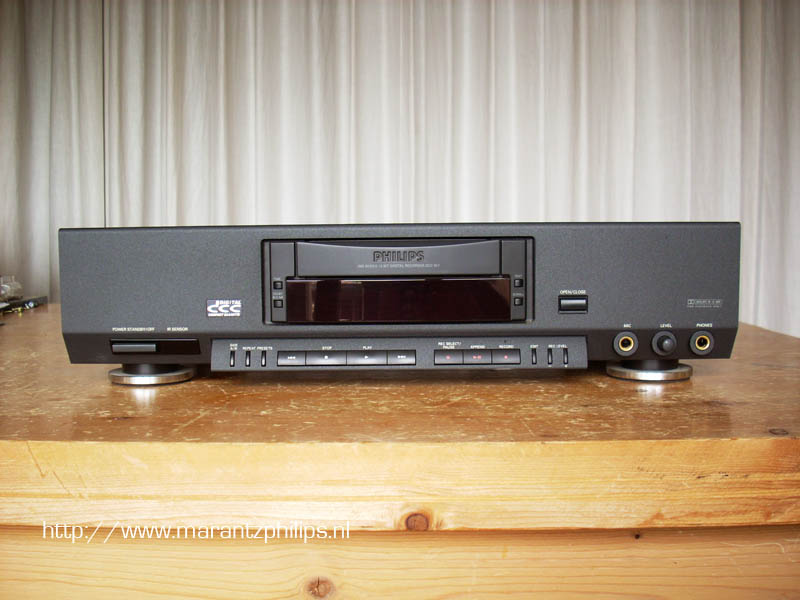 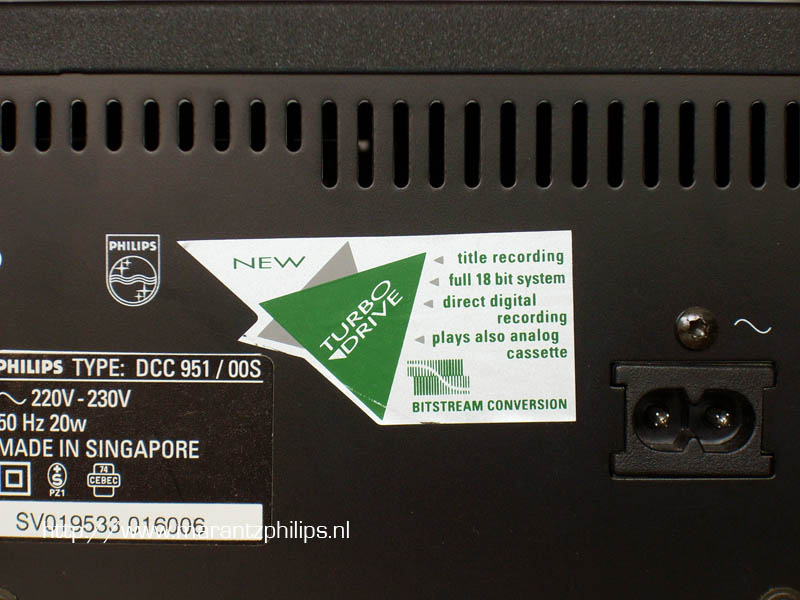 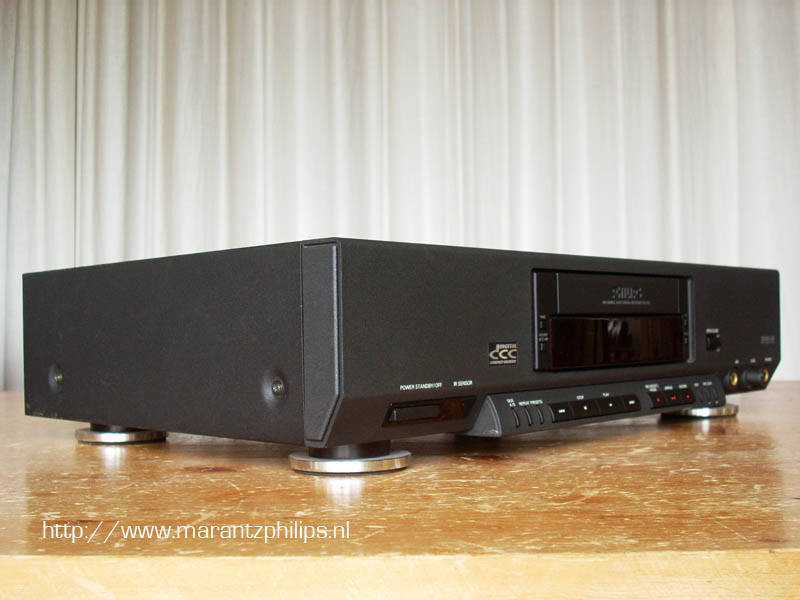 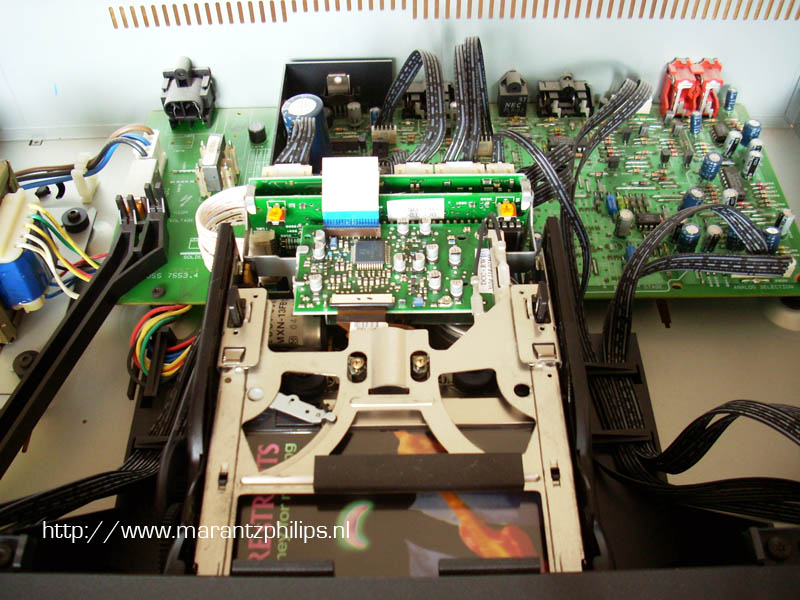 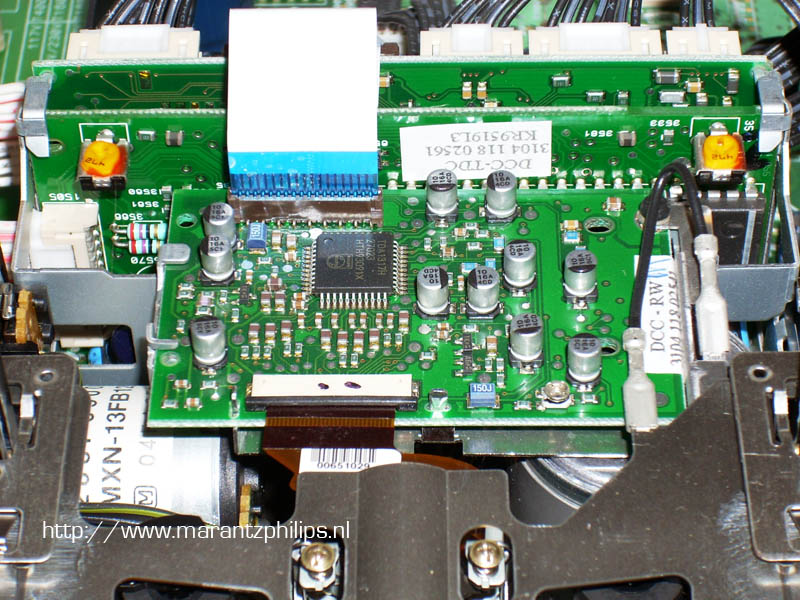 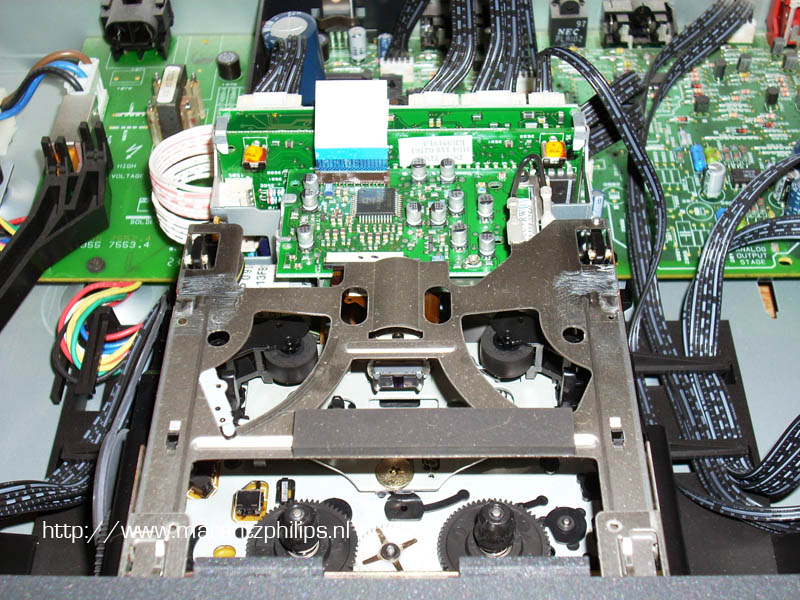 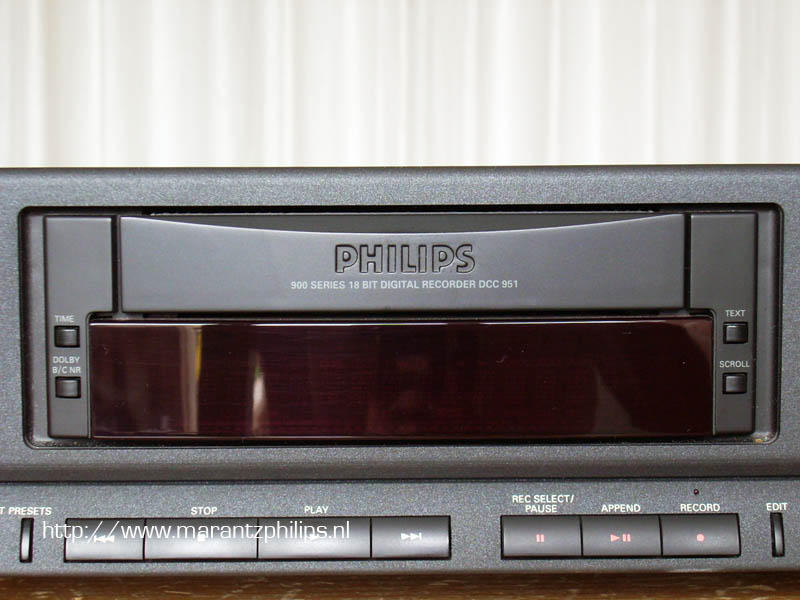 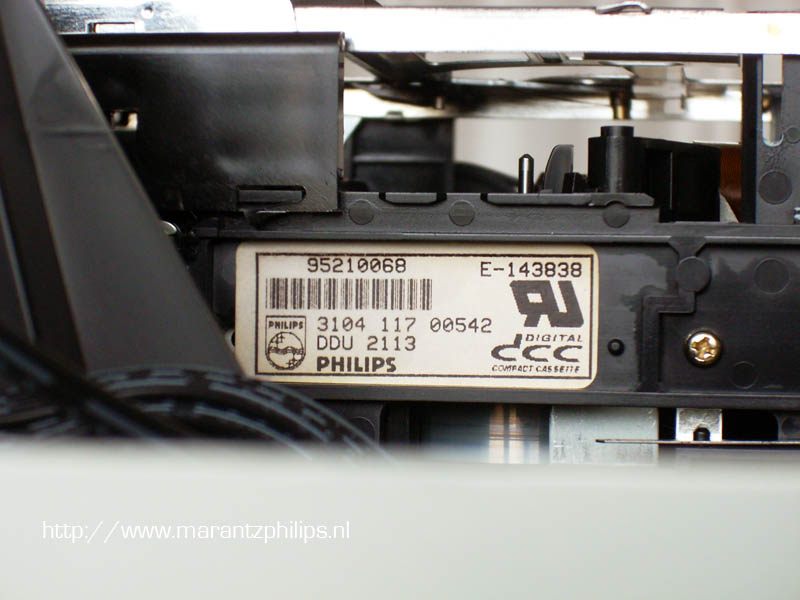 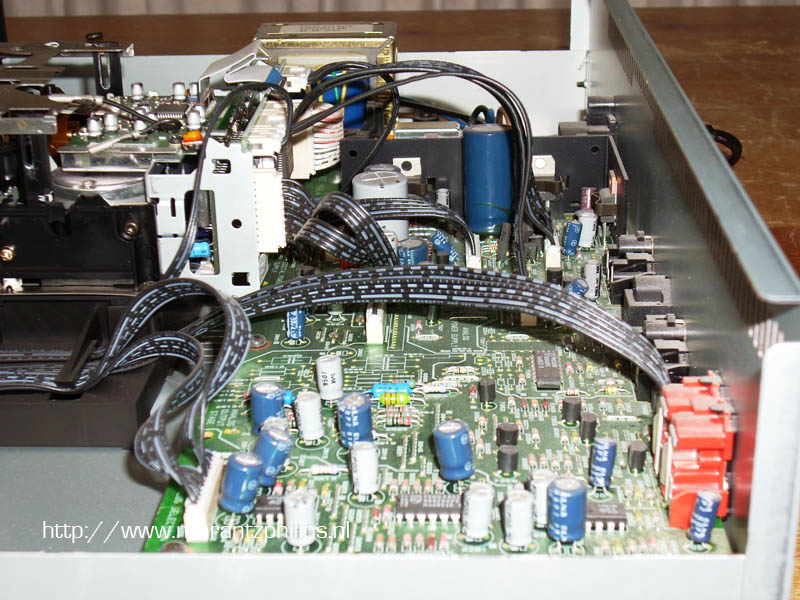 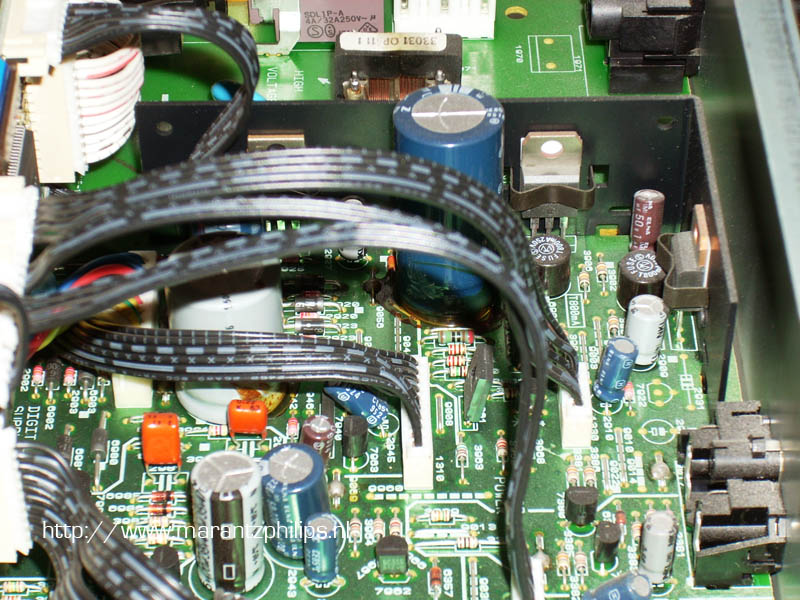 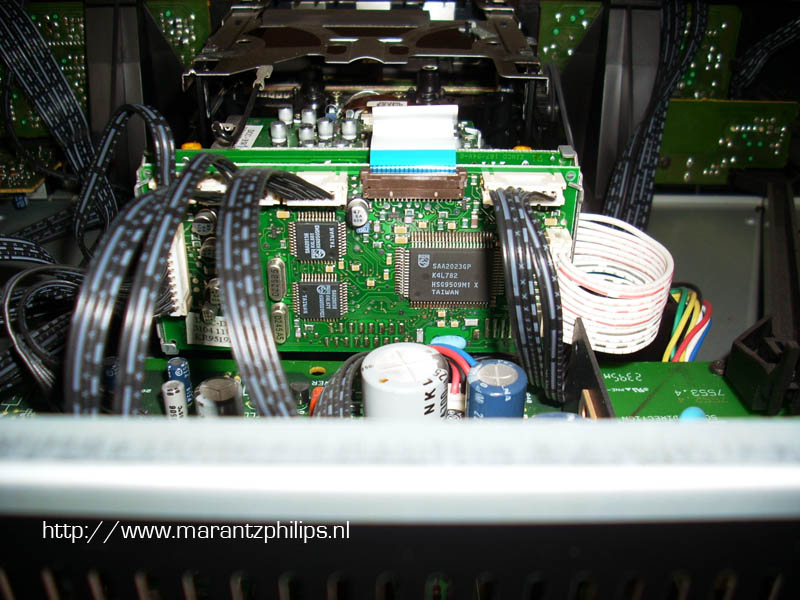 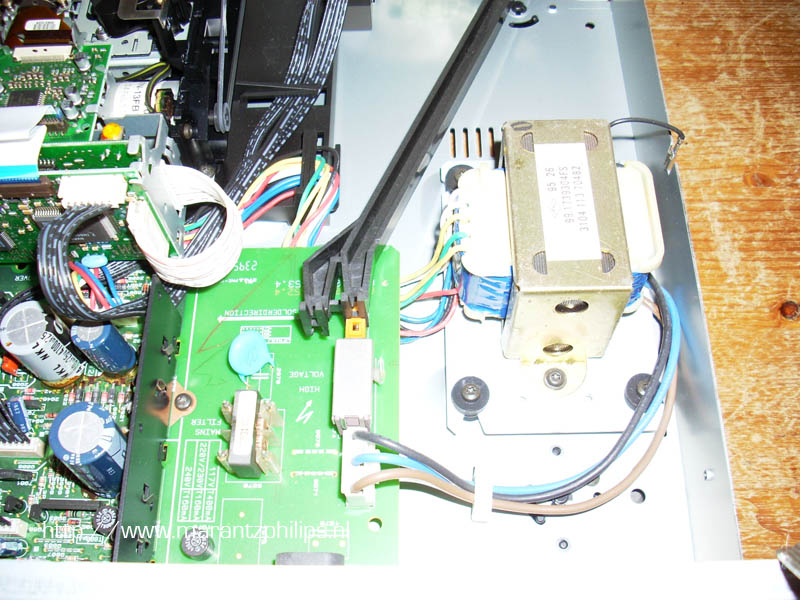 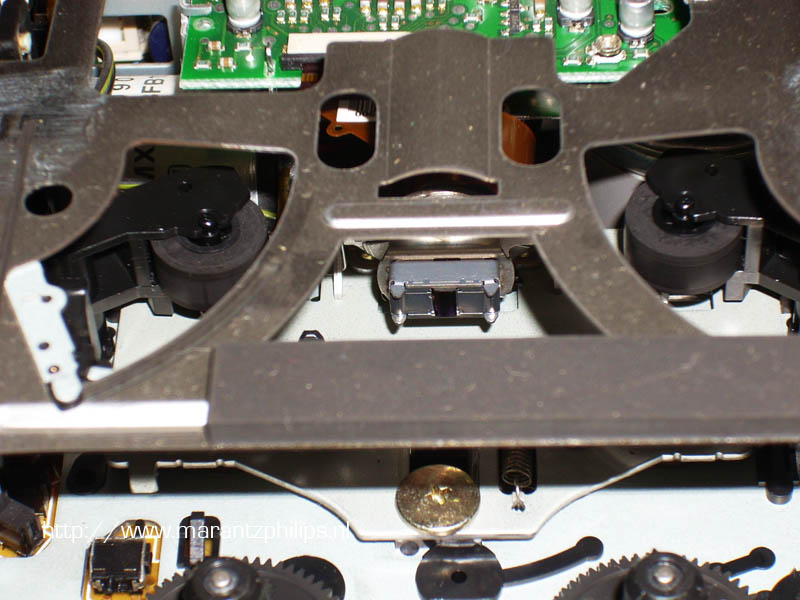 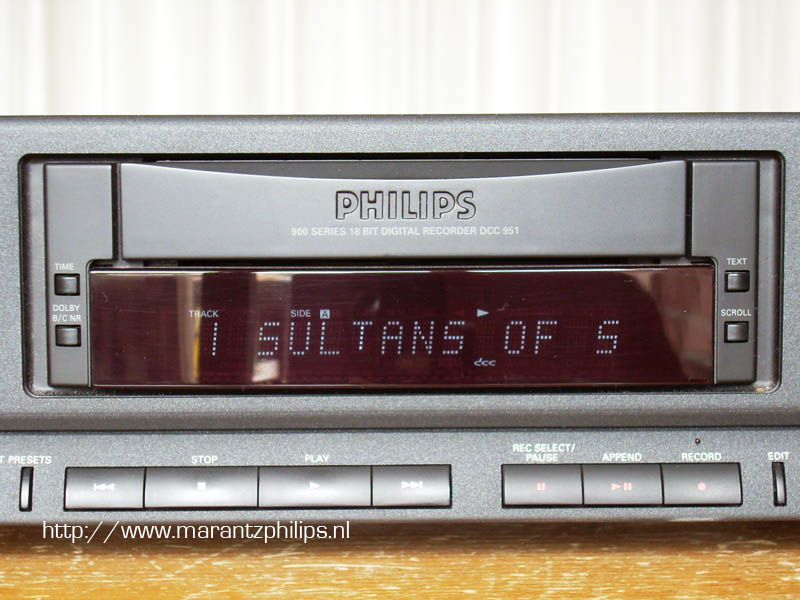 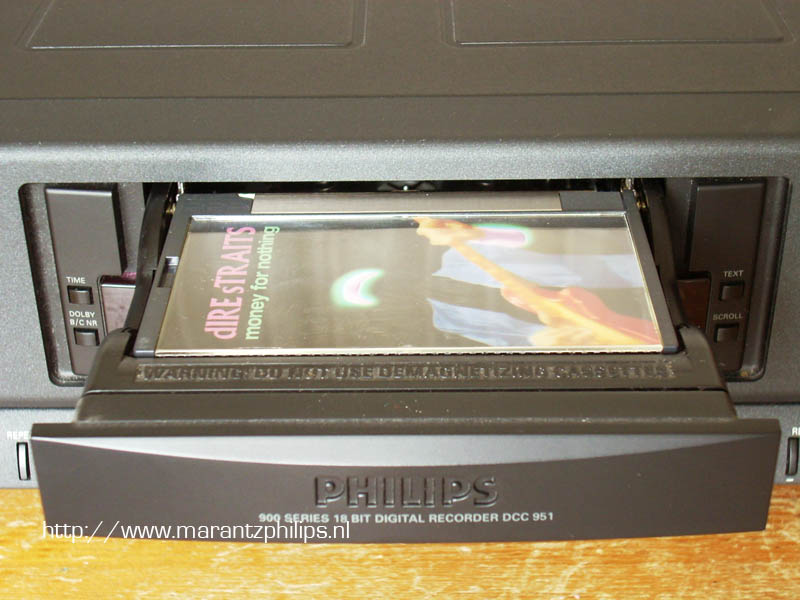 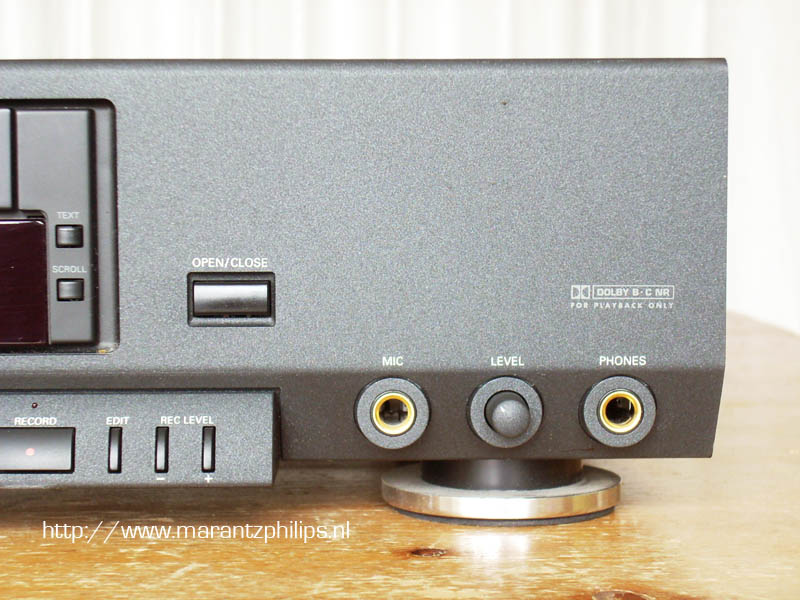 We're in the realms of subjectivity here. Because the new generation of DCC machines utilises 18 bit recording the dynamic range is greater than that of DAT or CD. Most aficionados agree that DCC sounds as good as sub £1000 DAT machines, and many say that the overall sound isn't as brittle - its more natural and "analogue-y". We are biased (of course), but from the thousands of units we've sold we've only ever had one complaint about the sound quality, and countless numbers of people contacting us saying that they can't believe how good DCC sounds.


Why is DCC so cheap?
DCC uses a fixed head mechanism - like a cassette recorder - as opposed to DAT which uses a helically scanning head system - like a video recorder. Consequently the mechanics of the DCC's transport is much simpler, and therefore less expensive to manufacture.


What's the difference between the DCC951 and the DCC730?
Very little apart from styling. The 951 is designed to match the 900-Series of Philips audio components, and incorporates an additional bus for communicating to other 900 series units - but for 95% of users this is of no use. Otherwise the performance of the 730 and 951 is identical.


Are DCC units reliable?
Because they are mechanically so simple, there is relatively little to go wrong and they have proved to be very reliable.

If you want to go on location and/or collect samples, then the 170 is the best bet, otherwise get a mains powered unit. These have much bigger buttons, faster rewind, infra-red remote, and titling, and for studio use are much easier to use day-on-day. The portables though have stereo mic inputs and are very sexy.


REVIEWS OF DCC PRODUCTS
Paul White - 'Sound On Sound'
'.... now that the supply of cheap DAT machines is drying up, a great many home studio owners are wondering which way to turn for mastering. Furthermore, certain very cheap DAT machines have gained reputations for unreliability.... it [ DCC ] seems now almost certain to become a significant player in the private studio market.'

'.... It would seem then that DCC is the perfect answer for those looking for a low-cost means of recording high quality stereo masters..'

'To confirm that the machine was compatible with DAT, I cloned a tape I'd made in the studio and had no trouble with this procedure at all. When the two recordings were compared by switching from the original to the copy during replay, a difference in sound was just evident, but it was subjectively no greater than the difference between one make of DAT machine and another.... Test recordings made via the analogue inputs also showed the recording quality to be excellent.'

'Also reassuring is the fact that the digital I/O's seem happy enough talking to DAT machines and that bodes well for those who want to download their finished mixes into digital editing systems or make DAT clones. In fact, you have the advantage that the sample rate of DCC conforms to the pro. 44.1 khz. rather than the 48 khz. standard adopted by most budget DAT recorders.'

'At its current RRP of under £250 including VAT, free tape and inclusive remote control, the DCC730 is a superb budget mastering machine.... At this price, DCC is currently the only low cost option for high quality stereo mastering.'

'.... the recording quality is to all intents and purposes indistinguishable from DAT or CD. Indeed, if you're using the analogue input, you'll actually get a little more dynamic range than you would with a DAT machine.'

'.... for those looking for an affordable, high quality mastering system that maintains a high degree of compatibility with existing equipment, I have no hesitation in saying that the DCC730 represents an excellent way of spending £250.'

'What Hi-Fi'
The verdict from the above publication gave 19 stars from a maximum of 20 based on the four criteria of sound, build, facilities and value.

'And let it be said that the DCC is very, very good.'

'.... the improved dynamics of the 18 bit system are again apparent.... certainly there's no feeling that this is CD's poor relation'

'.... the DCC deck really shines: it makes stunning recordings from analogue sources, such as radio tuners. Hooked to the superb Audiolab 8000T tuned in to a variety of Radio 3 concerts, it's capable of making recordings that sound just as good as the off-air signal.'

'The digital format ensures solid pitch stability, even with demanding solo instruments such as flute, violin or piano, and you can set levels conservatively for the loudest passages confident of no tape hiss even in quiet sections.'

'.... it's easy to forget you're listening to tape and not a silver disc.'

'Record digitally from CD and the deck sounds good....but of course, you're not going to get 18 bit resolution from such recordings, since the source material - the CD - is only 16 bit.... With this new deck Philips has moved on from the simple ability to tape CD's well. Whether you play the new 18 bit pre-recorded tapes or make recordings from analogue sources, the DCC has a role of its own.'


'Hi-Fi World'
'I've used a good quality DAT machine for years and am no stranger to the way digital tape can render analogue sound dry and antiseptic. But the Philips simply wouldn't entertain the possibility, giving a surprisingly warm and fulsome rendition. The bass was particularly well-rounded and lacked the sense of sterility so common with digital. There was no trace of hardness higher up the frequency range - the drum kit was crisply captured and ride cymbals showed neither imprecision nor hardness.'

'All in all, I was seriously impressed with the DCC.'

'Fortunately, Philips have included a digital output on the DCC, which really does expand its horizons significantly, especially if you're in the market for squeaky-clean samples, digital editing or just plain tape cloning.'

'All DCC recorders will accept a digital input at all three popular sample rates (32, 44.1 & 48khz ), which is good news for anyone who wants to transfer a DAT collection to DCC. DCC's ability to handle any sampling rate you can throw at it might even precipitate a glut of second-hand DAT machines!'

'So Philips have produced an 18 bit portable DCC for 250 quid. Sounds too good to be true doesn't it? Nevertheless it's here, and the lessons of of price and consumer willingness to invest in a new format have been well and truly learned by their marketing team. The major record companies have already given the format a vote of confidence with pre-recorded tapes.'

'.... you can't ignore the fact that this is a portable digital recorder at a previously unheard of price....'

'I invited several people to listen to both the [Sony] minidisc MZ-R2 and the DCC170. Digital transfers of recordings to both formats were played back, and blindfold listening tests were carried out using four different sized speakers in different environments. It has to be said that it was pretty close, but the DCC170 seemed to win the day. Words such as "spacey", "airy" and "more exciting" were used to describe the DCC170 sound, and the MZ-R2 did seem to lose some of the recordings ambience and presence. On smaller speakers, the detail of sparkling percussion appeared more defined on the DCC.... the stereo image was narrower and the bass fainter than the DCC'

'Last but not least, is the appealing ability of the DCC system to play existing analogue tapes.... the DCC brings out the best in any tape.'

'Hi-Fi Choice' (DCC170 Portable)
The comparative test from the above publication gave the DCC170 a maximum 5 stars for both sound quality and overall verdict against 3 for Sharps' MD-M11and 4 for Sony's MZ-R2 minidisc systems.