The evolution of the Philips CD mechanism 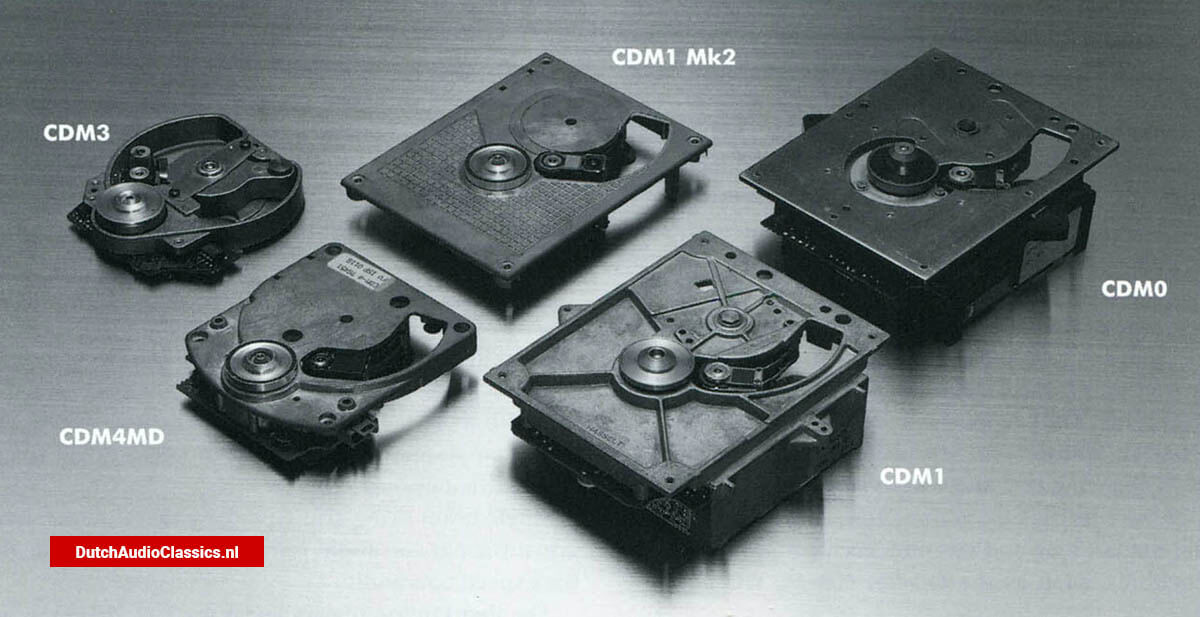 The first Marantz CD player, the CD-63 (1982), was a small-scale top-loading model. The superb design leaves a lasting impression, and thanks to its compact size and simple disc changing system and operation, it is more highly valued now than it was at the time of its original release. The drive mechanism installed in this model is the legendary "CDM0" which is even more highly rated today that it was at the time of its release. This single-beam swing arm system features a fulcrum evocative of the tone arm on an analog record player. This system was first used for the CDM0, and was continually employed throughout their entire series of CD drive mechanisms, including the final CDM9 Pro.

CDs are irradiated with a 780UM red laser beam from the polycarbonate resin substrate side, and whether the digital data is "0" or "1" is determined by an increase or decrease in the reflection of the laser beam. Thus, extremely accurate optical technology (lens design, lens fabrication, special coatings, and precise assembly) is required for the small optical pickup block. The company placed in charge of this was the respected German optical manufacturer, Rodenstock. Philips has used extravagant glass-backed optical lens blocks designed by Rodenstock in all of their high-grade drive mechanisms beginning with the CDM0.

The CDM0, as indicated by its model number, was the first CD drive mechanism to be developed. However, not all CD-63s, CD-73s and LHH2000s were equipped with the CDM0 (see reference tables). The CDM0 was replaced by the new and improved CDM1 after a relatively short period. The steel plate and some other parts used in the CDM0 were found to be problematic during mass production. Thus, the CDM1 was produced using zinc die-cast for all sensitive sections to remove unwanted resonance.

The CDM1 also featured major improvements in the precision of all of its parts. The famous CD-34, with its unprecedented price tag, was the first model in which the CDM 1 was employed. Later, a special fine-tuned version of the CDM 1 developed for use in high-end players like the CD-94 and CD-95. The CDM1 was used in Philips products manufactured in Belgium and Marantz products manufactured in Japan. The amazing success of the CD-34 manufactured in Belgium helped made revision of the system of supplying the drive mechanisms a necessity. Thus, Marantz established an assembly line at the Company's main factory in Sagamihara, procured all necessary components, and began producing CDM1s in Japan. The CD-54 and CD-84 released in 1984 both utilized Japanese-made CDM1 units.

The CDM2, with a resin top plate, was developed with the aim of reducing cost and weight while maintaining the quality of the zinc die-cast in the CDM1. The CDM2, how-ever, did not last long and was only installed in less expensive machines, such as the CD-25, CD-45, CD-65, and CD75.

The last large-scale drive mechanism to follow in the wake of the CDM0 and CDM1 was the CDM1 Mk2. This was based on a flat top plate design, with additional integrated circuitry and a compact base. Of course, the entire unit was made from strong die-cast metal. The CDM1 Mk2 was used in the CD880J and CD-80. Period wise, this was around the time that the 8-cm "CD single" was introduced. As the Philips single-beam swing arm type drive mechanism evolved, the extremely compact CDM4 appeared.

There are many versions of the CDM4, the most representative of which are the CDM4M with a hard resin top plate, and the die-cast CDM4MD. With the appearance of the CDM4, complete miniaturization of the drive unit, including the drawer mechanism indispensable in a front-loading system, became possible.

The final single-beam swing arm drive mechanism employed by Marantz was the CDM9 Pro. This unit was used in the CD-23 series of CD players for popular Musiclink Series of miniature components. This drive mechanism was a single-beam swing arm type developed to achieve maximum miniaturization. The "Pro" designation apparently meant to signify the fact that it employed a highly durable brushless servo motor, a glass optical lens block, and a machined aluminum turntable.

There is one single-beam swing arm drive mechanism that was never used by Marantz, the CDM3. This mechanism became well known when it was used in the professional-use Studer A730 (1988) developed jointly by Philips and the famous professional component manufacturer Studer. The CDM3 was originally designed for use in car audio and had a lightweight die-cast body, which still managed to provide substantial rigidity. In addition to the Studer A730, the CDM3 was also used by Luxman Japan.

The CDM9 Pro was the last Philips single-beam CD drive mechanism. Thereafter, they switched to the 3-beam linear tracking system adopted early on by Japanese manufacturers. Philips chose a linear tracking construction that moved the optical lens block in a straight line because computer CD-ROM drives requiring high read speeds were in demand. The swing arm system using a counter-weight had too much moving mass and too slow random access times for this application. In addition, because the swing arm system used tracking error angle, it was not possible to use this system with more than a single-beam.

For high-speed reading, a 3-beam system that can pick up adjacent pit streams is more advantageous. Single-beam swing arm type drive mechanisms, however, are sufficient for audio only systems that do not require high speed operation.

The first Philips 3-beam linear tracking drive mechanism used by Marantz was the CDM 12.1. The VAM 1252, equipped with a zinc die-cast body and commonly known as the CD Pro, was employed in the high-end CD-7 machine. The low cost VAM12 version of the VAM 1252 was used in the CD-17Da and CD-19a. The VAM2200 series, which may be the last Philips-made CD-only drive mechanism, was used in the latest Marantz CD-only player, the CD7300 (2002).