The basics of digital audio on disc (Philips, 1984)

Back to the index
In digital audio, once sound has been converted by microphones into electrical signals, there is no attempt to replicate the shape of those electrical signals as in conventional LP records. Instead of recording the signals continuously, they are sampled as shown in Fig. 1, which means that measurements are made of the instantaneous values of the waveform, and those measurements are then recorded in digital form. As shown in Fig. 1, if a measurement is made at a certain moment and is found to have the analogue value of 6 volts, it is converted into the binary equivalent of 6, which is 110. In actual practice the signal sampling is performed 44,100 times each second to ensure that signal detail is not lost between samples.


The big advantage of making recordings digitally, using binary values, is that only two unambiguous conditions are possible — a one or a zero, representing an on or off condition. Numbers in binary code therefore retain their inherent accuracy no matter how often those numbers are processed, and no matter how complex the processing may appear to be. This inherent accuracy is related to the number of bits - or binary digits — that are used. The Philips Compact Disc system employs 16 bits, which gives an extremely high accuracy. The actual measurement error is a mere one bit in 216 bits, which is a possible error of only one part in 65,536.

The only apparent problem with operating in binary code is that a very large number of different operations are needed to perform any worthwhile tasks. Adding two and two, for example, involves dozens of operations in a calculator but, as every owner of a calculator knows, these simple repetitive operations are carried out at an incredibly high speed.

Moreover, the equally incredible prices of modern microelectronics mean that complex processes, involving hundreds of thousands of operations per second, can be performed in a very efficient and cost-effective manner. Modern microelectronics of the kind shown in Fig. 2 are, in fact, the key element in Compact Disc's multi-technology breakthrough. Digital reality has been a commercial reality A for some time, but playing back the digits in the home only became practical with today's advanced LSIs - Large Scale Integrated circuits — onto which are packed tens of thousands of transistors that in total carry out over four million switching operations a second in a CD player.

In digital recording, sound is recorded as a series of digital numbers, in fact into 44,100 numbers of 16 bits per channel each second, which is a very large number of bits. Since each bit is nothing more than a zero/one condition, they can be replicated as a series of pits that are etched onto the disc's bright, reflective surface. when light, in the form of a highly concentrated laser beam, is focused onto this pattern as shown in Fig. 3, a reflected signal is received from the flat surface and little or no signal is received from the pits, where the laser beam is scattered. In the player's optics, the reflected signal is passed to a photodiode as shown in Fig. 4. The output of the photodiode is therefore a series of electronic ones or zeros, depending on whether a light signal is received at each particular moment. It is important to realise that it does not matter exactly how much light is received, because anything above a predetermined level is made into a one, and everything below that level is made into a zero. This is in fact the fundamental benefit of working with digits, and in this way an extremely high degree of playback accuracy can be ensured, since exactly the same 16-bit information is read as was originally recorded. 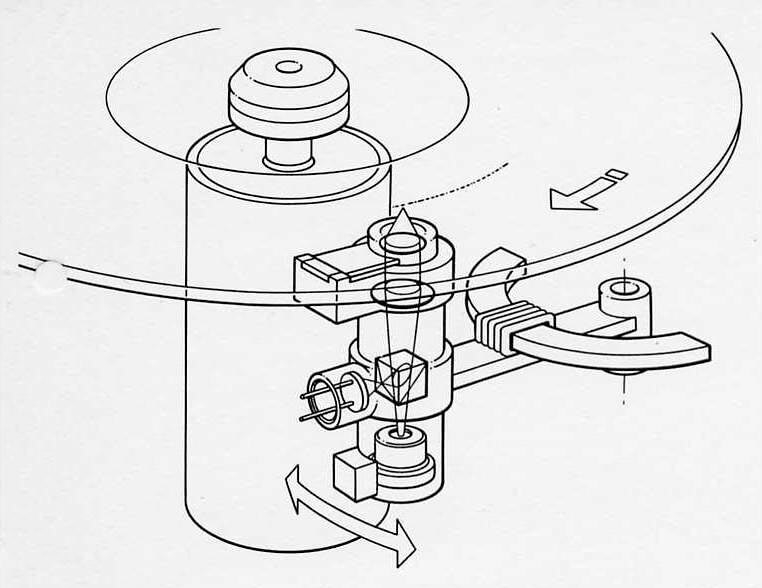 Fig. 03
Laser light is focussed into the disc’s bright, reflective surface where it reads the microscopic pits as either a high reflected light level or a very low level since light is scattered in the pits. These signals are converted into eiectronic digits by the illustrated photodiode. Note the tracking arm, which moves from the inside to the outside with a progressive speed change from 500 to 200 revolutions/minute.

Fig. 04
The laser beam passes through a special semi-reflecting prism and on to the lens system, which keeps it in sharp focus on the disc surface. The relfected light is diverted by the prism and into the photodiode.


The conversion of this 16-bit information into analogue signals for the amplifier and loudspeakers is done with digital-to-analogue converters - or decoders - as shown in Fig. 5. Like digital recording, decoding is a well established technique that has to be done in professional recording studios in order to be able to make analogue records from digital recordings. The only difference is that what is done in the studio with a box full of electronics can now be done in the home, in a Compact Disc player, using just two LSI circuits — one for each channel. 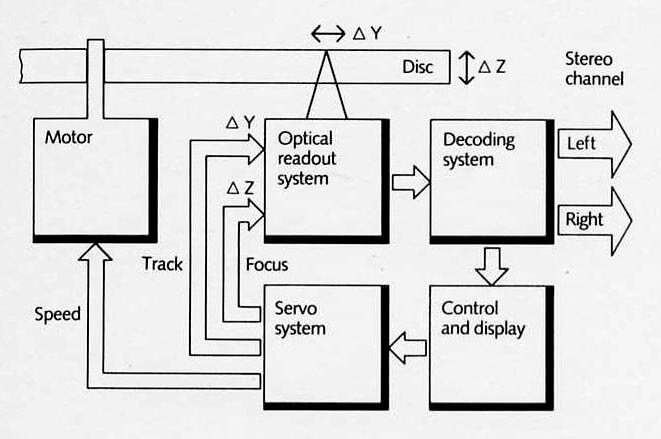 Fig. 05
Simple schematic of the system's electronics shows how speed, tracking and focussing are controlled by a servo system and how the digital signals are decoded for both channels. Control information allows any combination of tracks to be played in any desired sequence simply by entering track numbers at the keyboard. At the same time a text display may be provided to identity the music being played.

Compact Disc's fundamental audio benefits are superior sound quality, coming from the elimination of recording and playback errors, and the lasting quality of that sound, since the laser makes no contact with the disc. For the audiophile, however, there are several more major benefits. As mentioned previously, sampling is done 44,100 times a second. This frequency is derived from a very accurate and stable crystal clock. Therefore digitally recorded sound has a built—in time relationship. This same time relationship is included on Compact Disc and therefore, even though the rotational speed of the disc is controlled very accurately, even the most minor of variations can be corrected electronically, using the timing signals. There is thus absolutely no 'wow' or 'flutter' with Compact Disc. Nor is there any 'rumble', since there is no physical link between the moving mechanics and the optical read-out system.

Channel separation is extremely high since the two signals are recorded and replayed as two alternating data streams. And the dynamic range has to be heard to be believed. It can literally be as high as at a live performance. The recording levels can be adjusted so that even the lowest music signals can be clearly heard without noise. At the other end of the range, high—level signals are not limited by the physical restraints imposed by a stylus, for example.


The need for standards

It is obvious that in an ideal world all digital discs should be able to be heard on all makes of digital disc players, just as they are with conventional LP records and players. However, there are a number of complications with digital recording and playback, since we are no longer dealing with a basic entity like a waveform shape. These complications come from the fact that the pits on the disc are microscopically small, only 0.5 thousandths of a millimetre wide, so the tiniest imperfection in or on the disc surface could cause a reading error.

Correcting these reading errors presents no major technological obstacle since the same problem exists, for example, with the magnetic surfaces of computer discs. Error—correction techniques for digital audio can therefore be based on those that already exist and are well proved in computers, but only as long as a worldwide standard exists for both recording and playback.

The fact that recording and playback are interdependent comes from the fact that while signal measurements are made to a worldwide l6—bit standard, they are not recorded in this form. Instead, they are cut up, scrambled into a code, mixed with so-called parity check symbols, interleaved and finally rounded—out with synchronisation, control and display information. The basic purpose of this apparently complex process is to convert sequential bursts of errors arising from imperfections on or near the disc‘s surface into isolated, individual errors when they are electronically read back, i.e. when the data is both 'unscrambled‘ and reconstituted in the correct order. Since Sony was and still is a leader in the field of digital recording, it was a natural partner for Philips in the establishment of such a worldwide standard. This standard ensures perfect sound, since error bursts of up to around 3,500 bits can be corrected by the Compact Disc player's built-in microprocessor intelligence. when one considers * that this is the equivalent of a drop-out over 2 mm long in a track, it is clear that while digital audio may appear to be complicated, it is also a powerful space-age technology that brings with it a very significant advance in high-fidelity sound reproduction.