This report describes Philips 16-bit D/A conversion system for the compact Disc digital audio system and other applications. A digital oversampling filter enables a dynamic range of >90dB to be achieved.

Philips is introducing a new concept in high fidelity audio - Digital Audio on Compact Disc. The principle behind this important invention is the use of digital recording in which pulse code modulation (PCM) is employed. with PCM the sound amplitude and frequency are represented by only 'O' and '1', and then recorded as equal amplitude pulses. On playback, all that has to be done is to discriminate between the presence and absence of signals. Thus, PCM enables very superior specifications to be achieved; there are virtually no effects of distortion or.noise in the transmission and recording of signals.

Digital recording represents a major technological leap forward in sound reproduction from disc. Bigger even than the advance from the old 78 to the microgroove LP of today. Our pursuit of the ultimate in high fidelity sound reproduction, even with the best of conventional analogue systems and their high state-of-the-art, is still limited by a number of drawbacks in the form of noise and dynamic range limitations. These limitations are inherent in the master recording tape itself, tape heads, pick-up elements, motors and many mechanical systems. Although these may be minimised, it is virtually impossible to eliminate them altogether. The new dimension, digital recording, represents a tremendous step forward in the audio field which will affect the entire industry.

To recreate the original sound, it is necessary to convert the PCM signal into an analogue signal. This is carried out by means of a digital-to-analogue conversion system.
In Compact Disc applications, the audio signal is linearly quantised with 16—bits. It is well known that every extra bit gives a further improvement of 6 dB in the signal/noise ratio and, hence, the dynamic range. Therefore, with 16-bit quantising, theoretically a dynamic range of 96 dB can be obtained.

Philips has developed a 16-bit conversion system with a remarkable performance. The fundamental problem of quantisation noise is solved at source, before D/A conversion, using a digital oversampling filter and noise shaper. These two techniques give a 13 dB improvement in signal·to—noise ratio and therefore reduce the conversion requirement by two bits. They also eliminate the need for large and bulky analogue filters as well as the resulting phase distortion and problems caused by temperature drift. 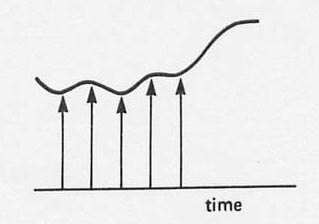 Fig. lb - Spectrum repeats itself at multiples of the sampling frequency fs and noise is created.


How the system works

The conversion system comprises a digital oversampling filter incorporating a noise shaper, and a 14-bit DAC (Philips TDA1540) with a hold function. Following the DAC, a simple analogue filter is used. when this conversion system is used for playback of the Compact Disc, extremely high quality sound will be achieved.


The digital oversampling filter, type number SAA7030, consists of three main sections: oversampling, transversal filter, and noise shaper. In an Audio Compact Disc application, two 16-bit data streams, one for each channel, having a sampling frequency of 44.1 kHz, will be fed into the conversion system at a clock rate of 2.1168 MHz. The input signal is first fed into a shift register where the sampling frequency is increased four times to 176.4 kHz. This results in a frequency spectrum containing multiples of the sampling frequency at 88.2 kHz, 132.3 kHz, 176.4 kHz, and so on. This signal is now applied to a transversal filter with 96 taps. Here, a shift register delays the incoming samples so that, after multiplication by 12-bit accurate coefficients and subsequent addition, the weighted average of a large number of samples is obtained. The filter has a transition region between 20 kHz and 24.3 kHz and, due to oversampling, around 176 kHz. The output from the transversal filter appears as a digital signal with a word length of 2B bits and a smnple frequency of 176 kHz. 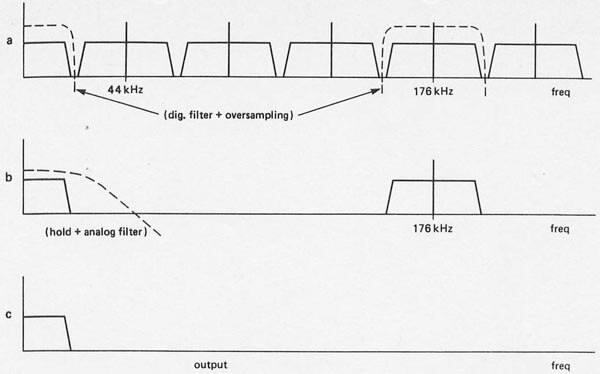 Fig. 3. The role of filtering. Oversampling digital filter cuts out unwanted frequencies (a), hold function suppresses signal around I76 kHz (b), and analogue filter only passes signals in audio band (c).


The signal around 176 kHz is subsequently suppressed by the hold function which has a sin x/x characteristic with a first zero point at 176 kHz, and by the analogue low-pass output filter which has its -3 dB point between 30 and 40 kHz. The latter may be a 3rd—order Bessel filter; accurate filter elements are not required. The hold function is provided by latching a flip-flop in the digital-to-analogue converter which follows the oversampling filter.

The hold function and the analogue filter give slight attenuation in the overall transfer characteristic. The digital filter is designed in such a way that this damping is corrected by a small upswing in its characteristic. 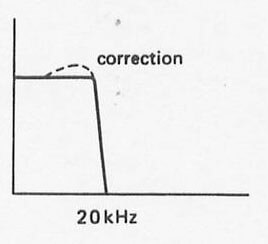 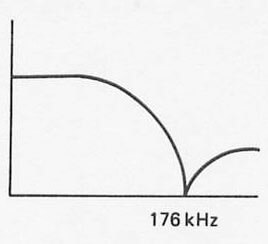 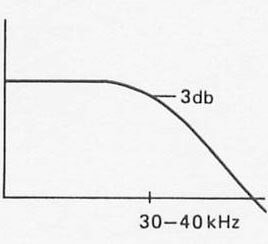 The input signal to the conversion system is quantised with l6—bit accuracy to obtain a 96 dB dynamic range. The conversion system must consequently have 16-bit accuracy and a 96 dB signal/noise ratio in order not to spoil the dynamic range. It will be clear that the oversampling filter itself does not add any noise because a 28-bit word length is used.

By use of the oversampling technique, it is possible to achieve true 16-bit performance with only a 14-bit digital-to—analogue converter. How this is accomplished will now be explained. Nonnally, in rounding—off the 28-bit signal to 14-bits, this truncation would result in a signal/noise ratio of 84 dB. By oversampling four times, the noise power is not distributed uniformly over the band G-22 kHz, but over a band four times as wide (0 - 88 kHz), Since only the noise in the audio band is relevant and the rest is filtered away, only one-quarter of the quantisation noise remains. This gives a further 6 dB improvement in the perfonnance which results in a signal/noise ratio of 90 dB.

Fig. 5 - Only one-quarter of quantisation noise remains in audio band with oversampling.

A further improvement in signal/noise ratio of I dB can be obtained by means of noise shaping. At lower frequencies it is possible to create a relationship between the rounding-off of the preceding sample and that of the sample to be rounded-off next. This is fully exploited in the noiseshaping circuit of the SAA7030. The rounding-off is delayed one sample time and added to the input signal. As a result, the noise power is filtered so that quantisation noise is no longer unifonn over the band 0- 88 kHz. In the audio band the noise is greatly reduced, but outside the audio band it is increased. Since the noise only plays a role in the audio band, this is not an objection. 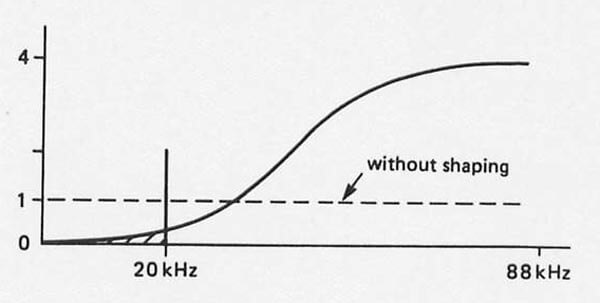 In the HiFi world it is well known that the pulse-shaped character of music transients is disturbed when the phase response of the amplifiers is not linear. This is one of the reasons why the bandwidth of good quality amplifiers is made much greater than would be necessary to accommodate the frequency spectrum of the audio signal.

with digital audio and with the design of conversion systems, this has also to be taken into account. By using the oversampling technique, a phase-linear 'digital bandwidth' of 20 kHz is realised with a digital filter. The low-pass analogue filter which follows the DAC has extremely good phase linearity and gives an 'analogue bandwidth' which is considerably greater than the audio bandwidth. In this way, there is no phase distortion in the conversion system.

Since oversampling results in a reduction in the height of the steps in the analogue output signals by a factor of 4, the distortion that would result from slew rate limitations of the analogue amplifier which follows the DAC becomes less. Furthennore, the frequency components are kept outside the audio band by going to a higher sampling frequency.

Intennodulation products created by mixing, for example, two components with frequencies of fs + fa and 2(fs - fa), where fs = sampling frequency and fa = frequency of audio signal, are also kept outside the audio band. This can easily be understood by assuming fa = 15 kHz and fs = 44 kHz or 176 kHz.