There have always been pioneers. Since Thomas Edison invented the record, we have had a medium for recording sound. Music disappears into space at the very moment it is played - something that would have been unthinkable before the 20th century. The advent of a recording medium that can freely reproduce the emotion of music is truly a gift of bliss for mankind. Just as musicians preserve their passion in scores as unique melodies using standard modules of notes, music reproduction systems also evolve through the use of technology. And the hardware that made the leap forward was none other than advances in recording media: in 1963, the compact cassette was developed; in 1982, the compact disc was introduced; in 1983, the first compact disc was released; in 1985, the first compact disc was released.

Mankind once again encountered a new technology. The digital compact cassette, or DCC, Philips has always been a pioneer in this field. The Philips CD factory is located in Hasselt, Belgium. It is only an hour and a half drive from Eindhoven in the Netherlands, where Philips' headquarters are located. 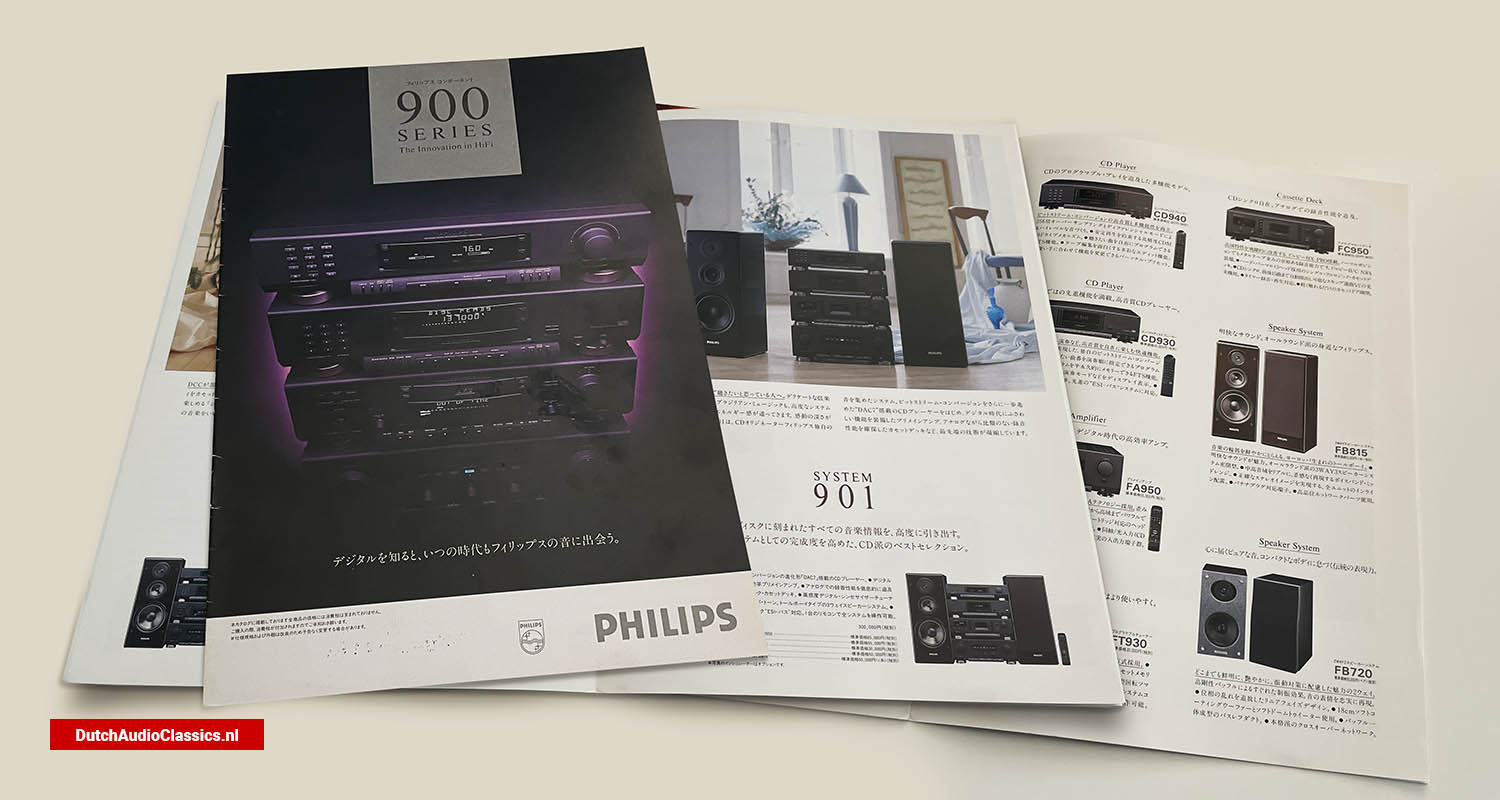 When listening to baroque music on the Philips CD950, Rubens' paintings seem to quietly emerge. When you look at the design of the Philips CD950, you can't help but feel the reverence for art that Philips has built up over the years, and the rigour with which it continues to protect it. Symmetrical configuration with black finish. Easy-to-read central display. Tray with engraved Philips logo. Listening to the Philips CD950, the large Rubens painting I saw in Antwerpen comes to mind. Rubens' paintings use a technique in which the dots are enlarged dozens of times. Up close, the colours seem to be dotted, but at a certain distance, the effect is vibrant and dynamic. It is undeniable that both Rubens and Philips CD950 are steeped in the European tradition accumulated in the bodies of their creators. 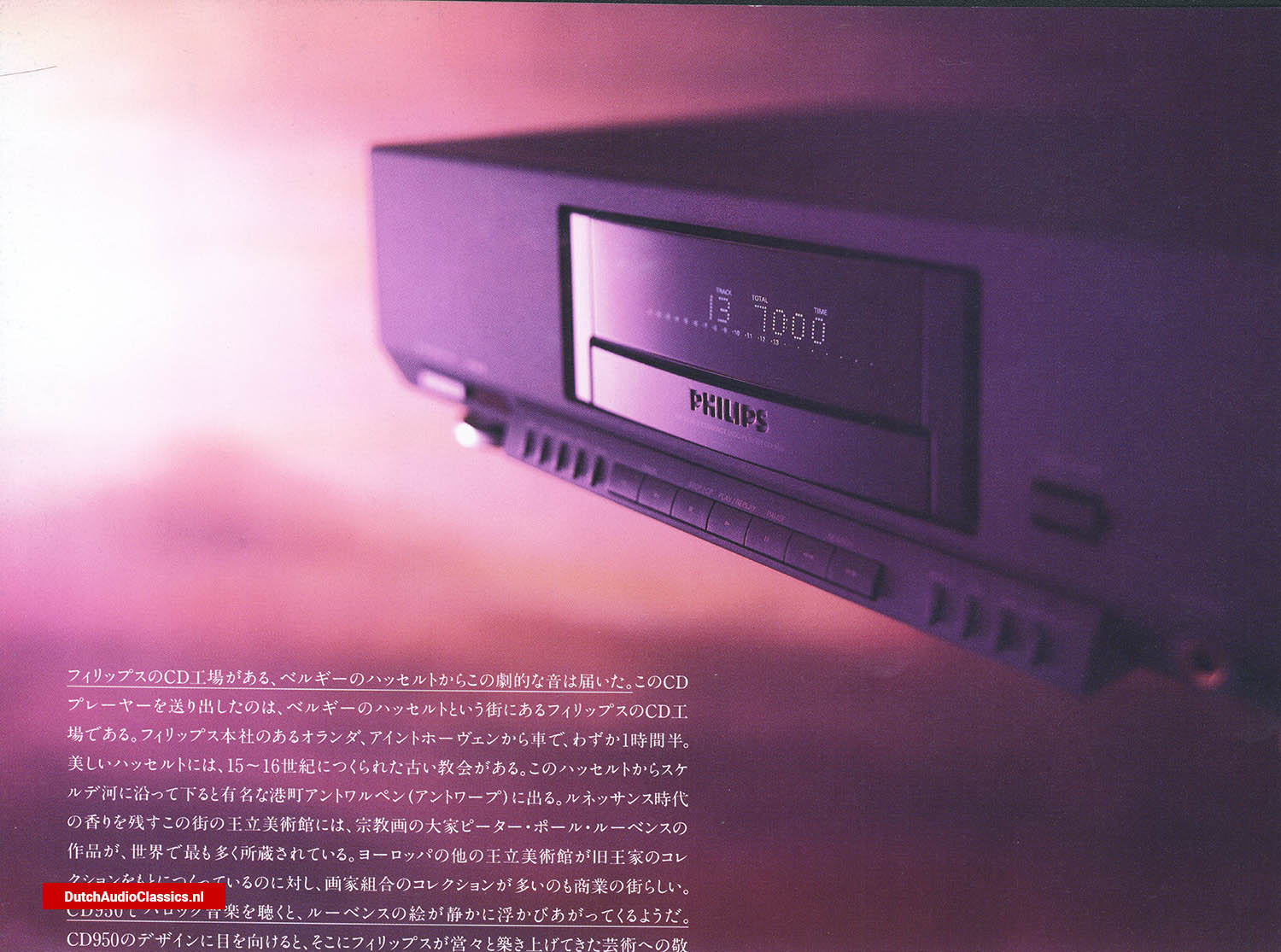 The evolution of bitstream conversion opened up a world of pure emotion.

The Philips CD950 uses the Philips DAC7 bitstream D/A converter, a further evolution of Philips' unique D/A conversion method. It has an extremely audio-orientated internal layout. The DAC7 is a pure music-specification device with a differential mode in advance, which cancels L/R interference and dramatically improves the signal-to-noise ratio. Delicate sound, eliminating non-linearity distortion and zero-cross distortion that can muddy the sound. The Philips CD950 reproduces even the most subtle components of each individual sound, preparing you for a world of pure emotion that you will encounter in Europe.

The newly developed Philips CDM-9 drive mechanism and earthquake-resistant chassis and body design ensure stable CD playback. The FTS (Favourite Track Selection) function allows you to freely store the tracks you want to listen to and play them back in any order. If you operate the unit incorrectly, an instruction message will appear on the display. Advanced communication ring ESI-Bus" compatibility. When combined with other 900 Series components, a single remote control can control the entire system.

Therein lies the technology that changes the course of the times. Philips has succeeded three times in unifying difficult global standards. The many challenges we face in the glorious history of technology. One of the most difficult internal challenges is the unification of global standards. Overcoming various barriers between manufacturers and nations, Philips has achieved this three times since World War II: Compact Cassette (CC) in 1963, Compact Disc (CD) in 1982 and Digital Compact Cassette (DCC) in 1992. In each of these cases, Philips spent more than enough time in consultation with manufacturers in each country. Philips has always played a pivotal role in epoch-making events in audio history. 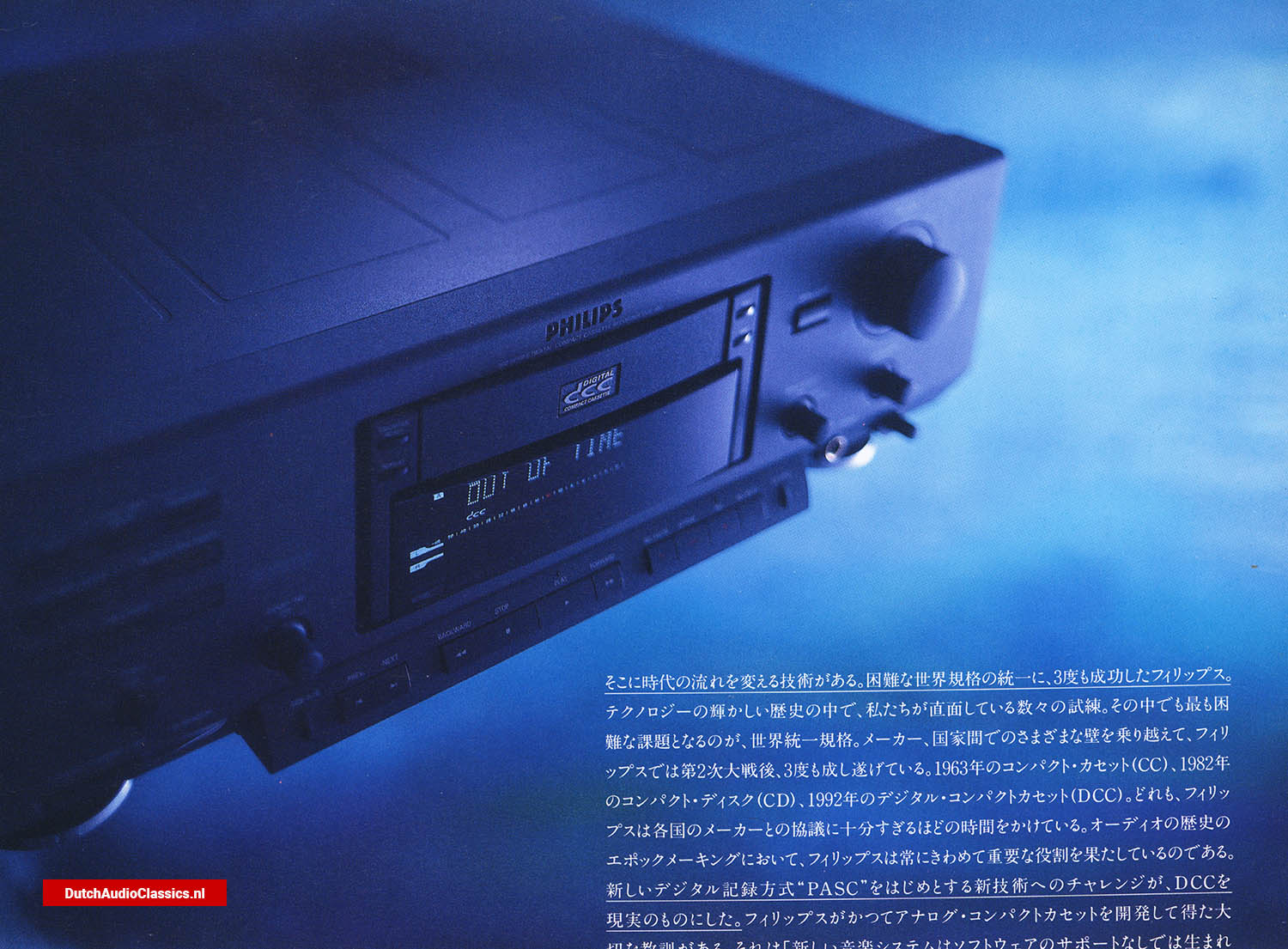 The challenge of new technologies, such as the new digital recording method "PASC", made DCC a reality. There is an important lesson to be learned from Philips' development of the analogue compact cassette. This was that "new music systems cannot be created without software support". It was on this theme that the development of DCC began: with DCC, the effect of bit compression for digital signal processing has been successfully increased by a factor of four compared to conventional systems. This was made possible by the new digital line coding method 'PASC (Presion Adaptive Sub-band Coding)', a new digital line coding method. The principle is that only signals in the audible range are recorded, without processing those that are inaudible to the human ear or hidden by other sounds.

The thin-film multitrack head and the trumpet mechanism, which automatically detects DCC/conventional cassettes, are also state-of-the-art technologies developed by DCC: load a DCC music tape into the DCC 900, and the name of the composer and track will be read and displayed on the display, followed by the first track name. If you want to listen to another song, simply send the track until the desired song title is displayed and press the play button. This interactive operation and the fact that conventional cassette tapes can be used without modification is due to the ultra-precise thin-film head that utilises semiconductor technology. To maintain compatibility with US and European cassettes, a tape speed of 1.76 cm/sec is ensured. When a tape is inserted, it automatically detects and switches between DCC and conventional cassettes. Although the size is the same, the DCC uses a sliding shutter to protect the tape from dust and scratches. The large space for the title label is also a consideration for greater flexibility in label design. It is filled with a new sense of reliability, similar to the feeling of floppy disks used in computers.

Equipped with a wide variety of digital, optical and analogue inputs and outputs. Transmits digital sources such as CD and DCC to digital speakers. The 16-bit A/D converter allows you to convert analogue tapes, tuners, etc. to digital for your enjoyment. ESI-Bus and DSS links for bi-directional netcooks; advanced communication links available for all 900 Series systems. "ESI-Bus. DSS Ring" for powerful integration with digital processing speakers, making it easy to create a two-way digital communication network. Flexible tone control. Volume, balance and tone control of digital speakers can be controlled directly from the DSC950. Directed by a control signal separate from the music signal. You can get the sound you want without changing the sound quality of the digital source. ● Selected digital source. 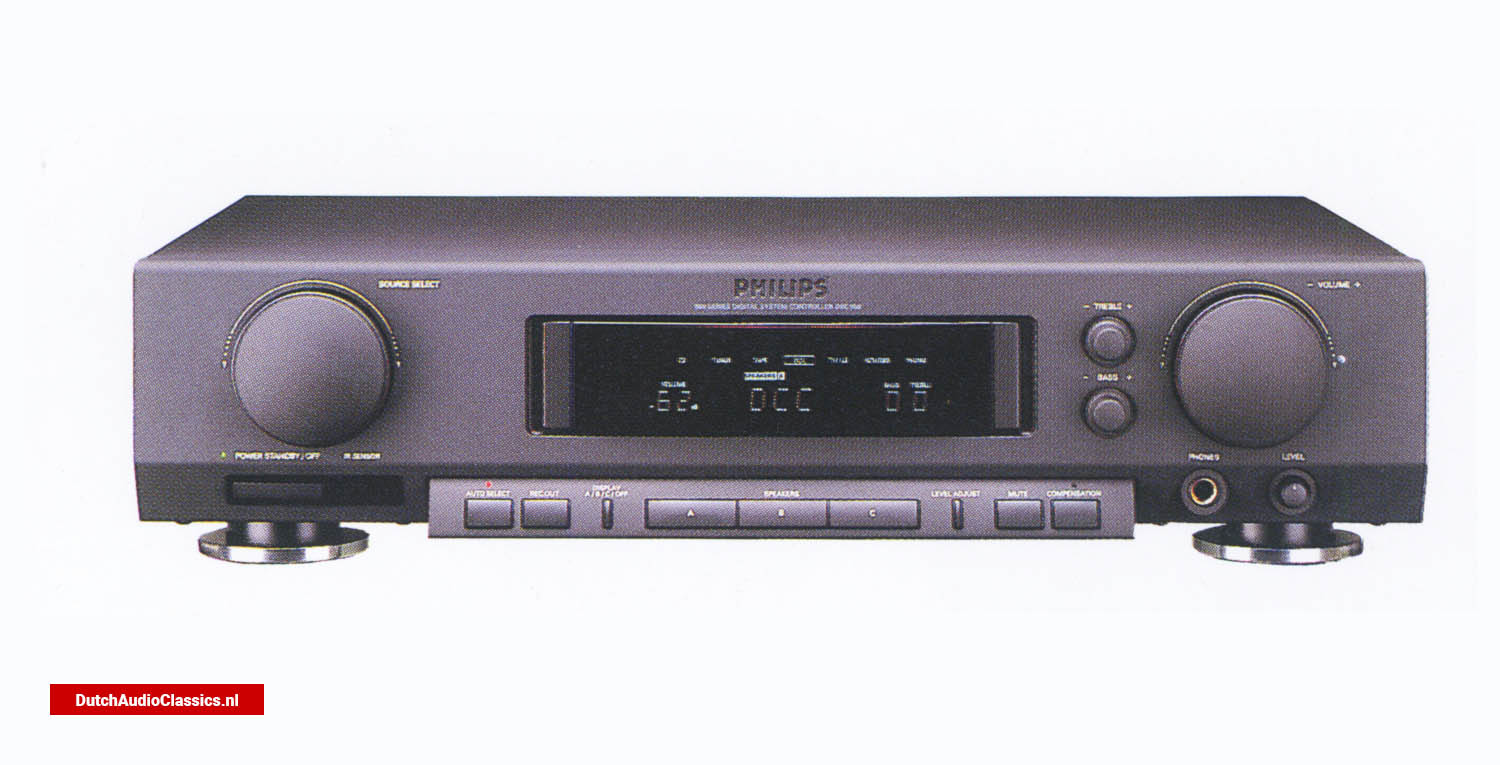 The selected digital source is shown on the display. Digital selector for direct digital recording. Magic touch operation, where the entire system can be activated with a simple touch.

The Philips DSS930 makes full use of DSP to reproduce the ideal sound. The built-in DSP creates a digital network, which realises steep slopes that are difficult to achieve with an analogue passive network. True digital sound is pursued. Even the subtle nuances of sound are not missed. Bitstream conversion D/A converter. The Philips DSS930 incorporates four DAC circuits, one for woofer and one for tweeter, which in principle eliminate non-linear distortion that causes sound quality degradation. 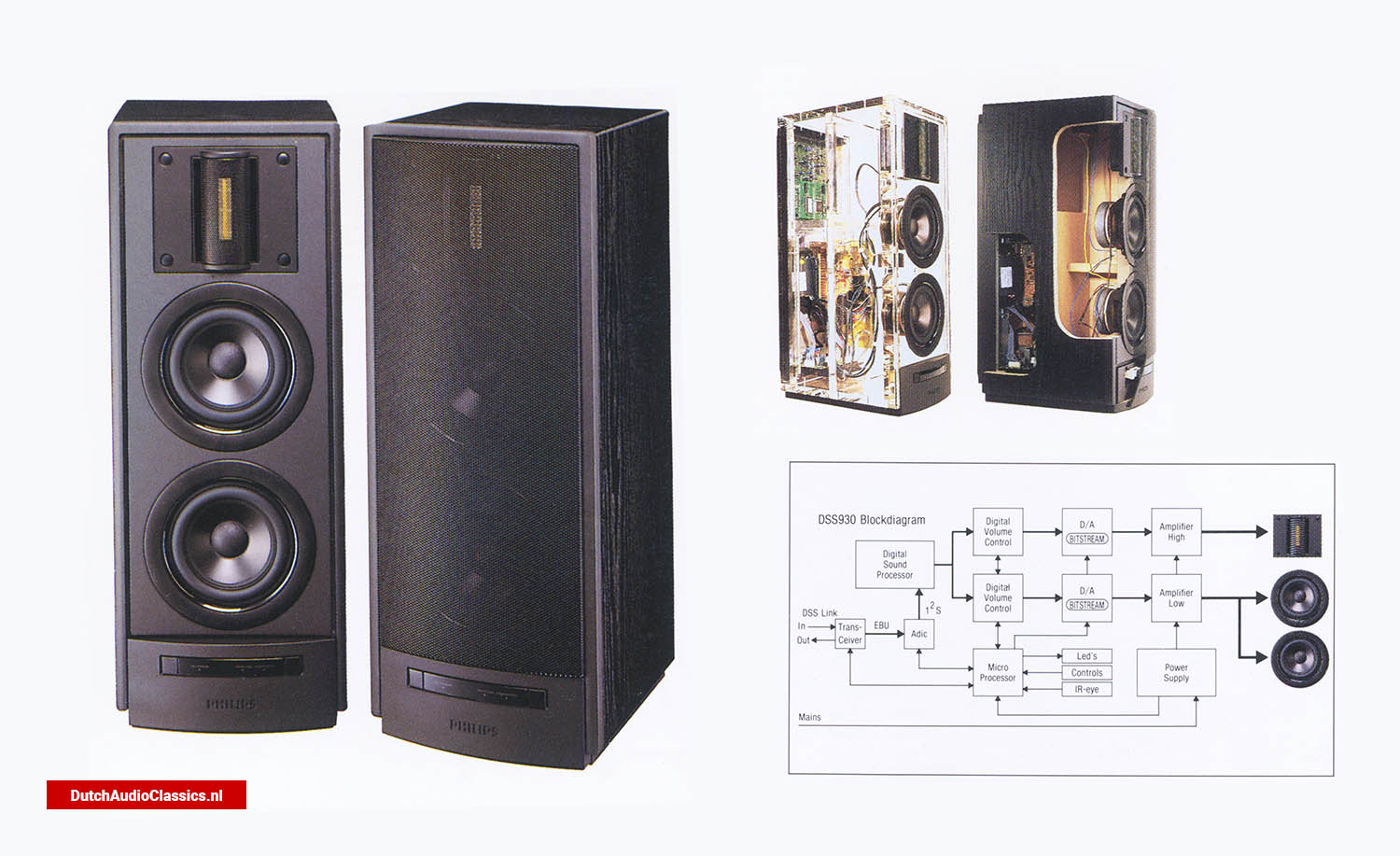 This is particularly attractive as it significantly reduces distortion in micro-signals. Even the lingering and subtle nuances of sound are clearly conveyed and the brilliance of the original sound is faithfully reproduced. Highly efficient XDA amplifier maximises the vast dynamic range of digital. The XDA amplifier is designed to smoothly handle the instantaneous peak output that suddenly occurs within the bass frequency. Advanced peak power can be reproduced instantaneously, without distortion and efficiently, providing optimum peak power over the entire dynamic range. The system rises smoothly from low to high frequencies with unparalleled smooth response.

The clear high frequencies are reproduced without strain, thanks to the ISO PHASE tweeter. The high frequency unit is Philips' unique ISO PHASE tweeter. It achieves a wide reproduction bandwidth and flat frequency response that could not be achieved previously. The sound grain is well-defined and natural tone without colouration is obtained. The newly developed, two long-stroke 5.25-inch woofers give a sense of scale with depth. Excellent sound quality and longevity. 25 mm thick MDF cabinet with excellent durability. Contributes to the provision of a stable acoustic space. The MDF cabinet is designed to provide a stable acoustic space. Designed for next-generation communication ring "ESI-Bus". Designed to be compatible with the next-generation communication ring "ESI-Bus".

An optional insulator that improves earthquake resistance and allows you to enjoy stable, high sound quality. They also make the appearance more attractive. 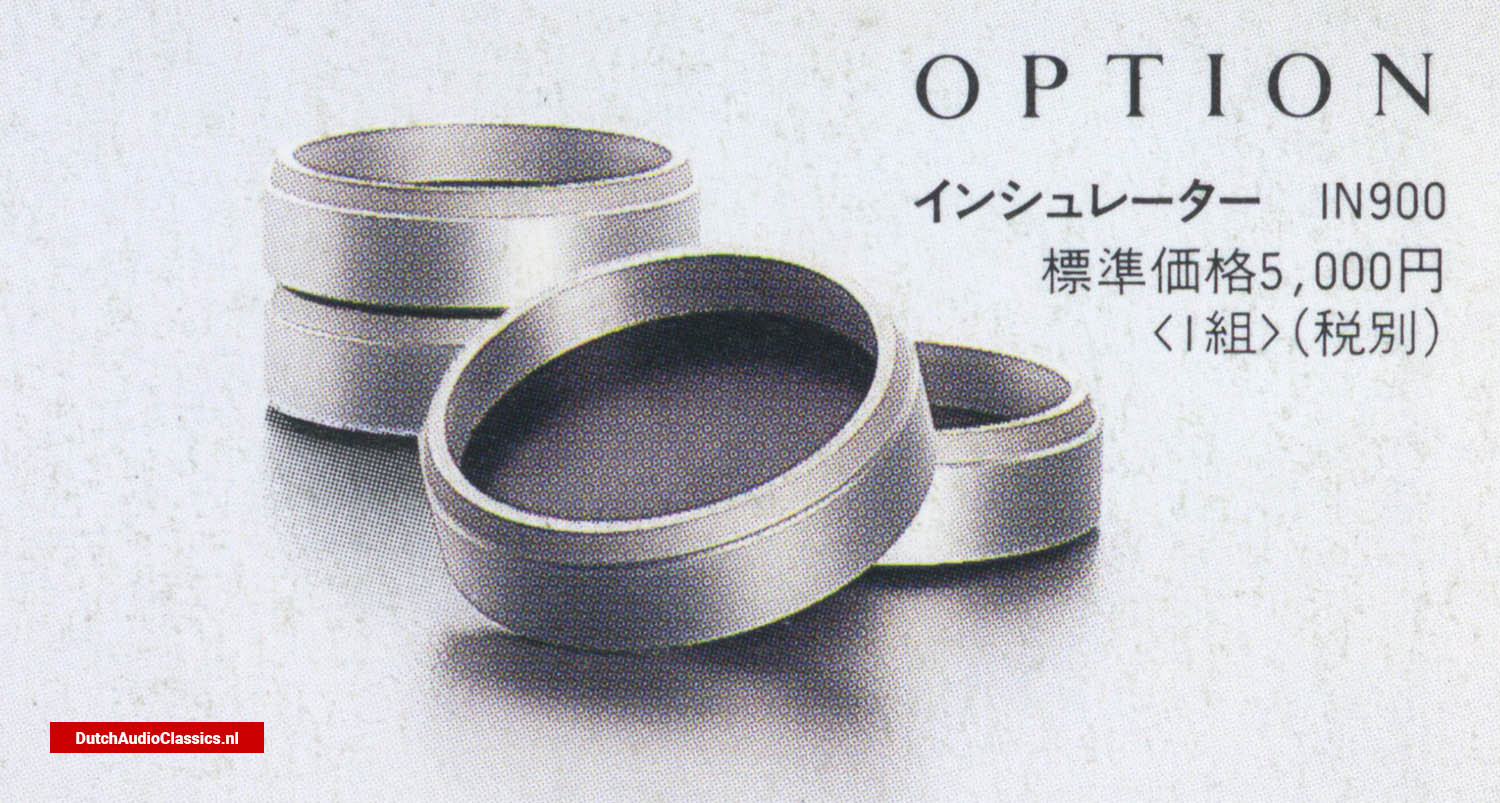 Extracts all the musical information contained in the digital source.
A full digital system incorporating Philips' most advanced technologies. 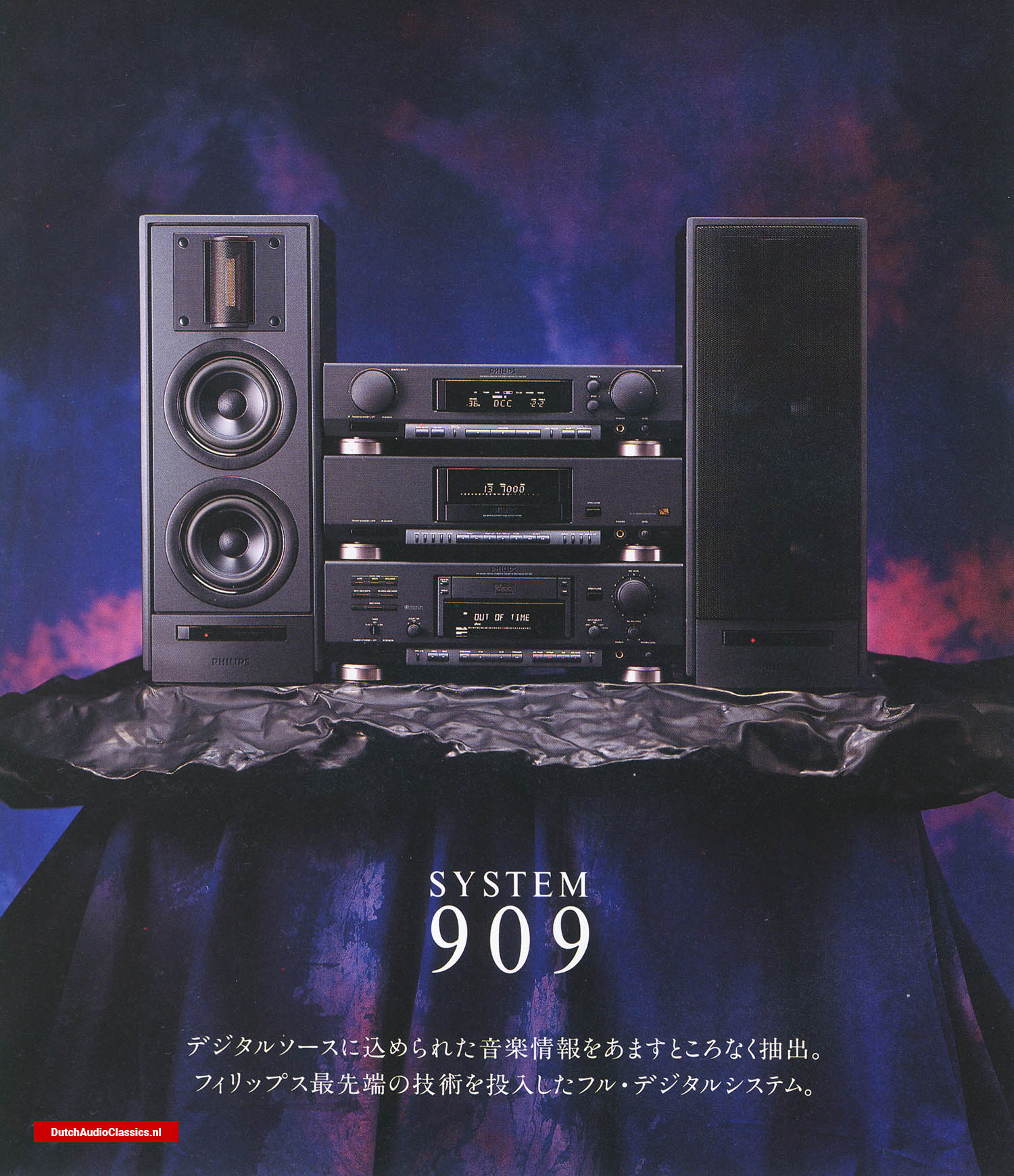 As the compiler of digital audio, it brings together the most advanced technologies newly proposed. In search of the ideal sound for the next digital age, we pursued a system that reproduces the message contained in the digital source. Here, a full digital system is introduced that combines a digital processing speaker system, a DCC deck and a top-of-the-range CD player to convey true digital sound, with a digital system controller at the heart of the Digital System, which plays a central role in the Decital system. It is always Philips that evolves digital.

Digital media circulate freely in the room.
A high-performance system that brings together Philips' elite components. 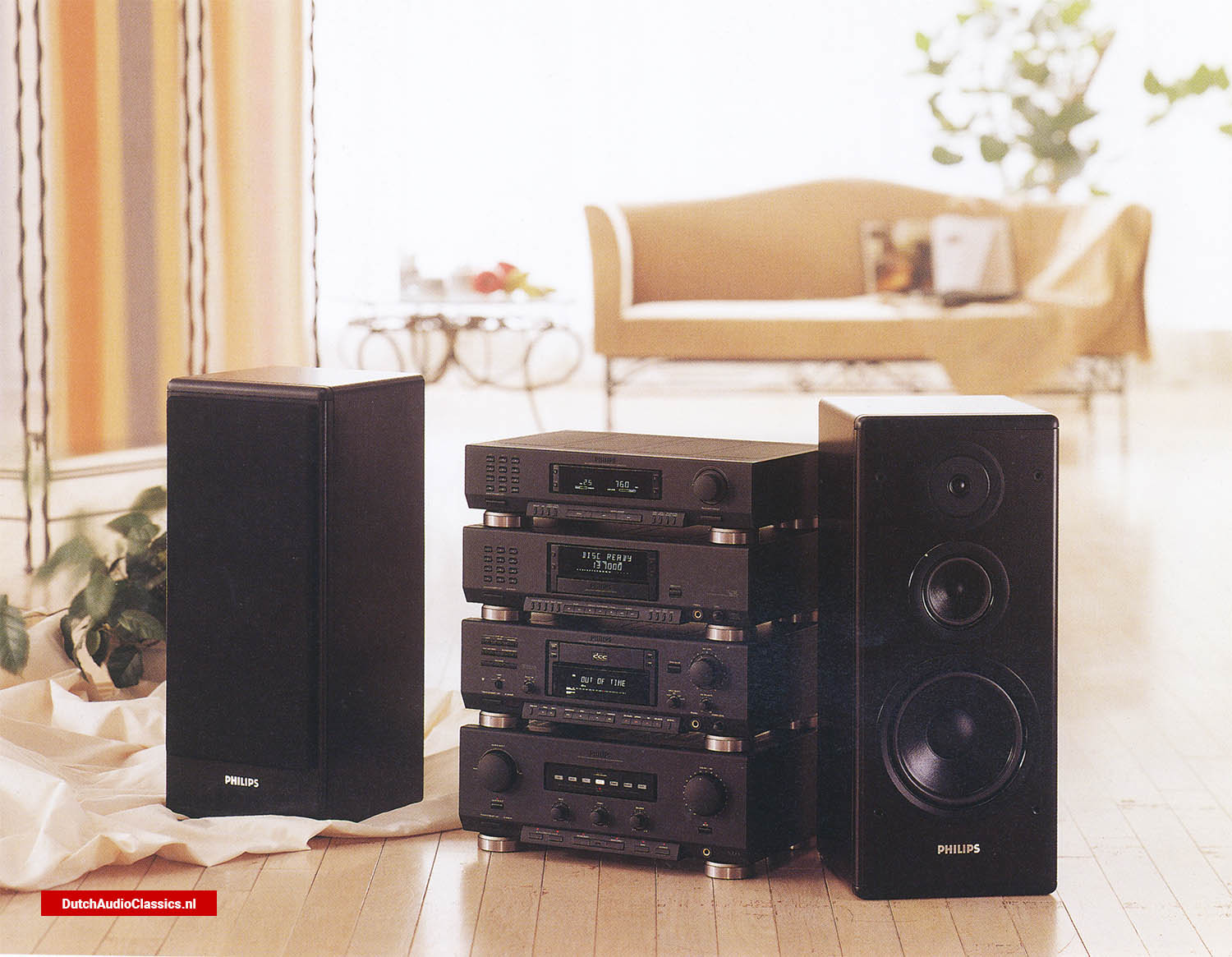 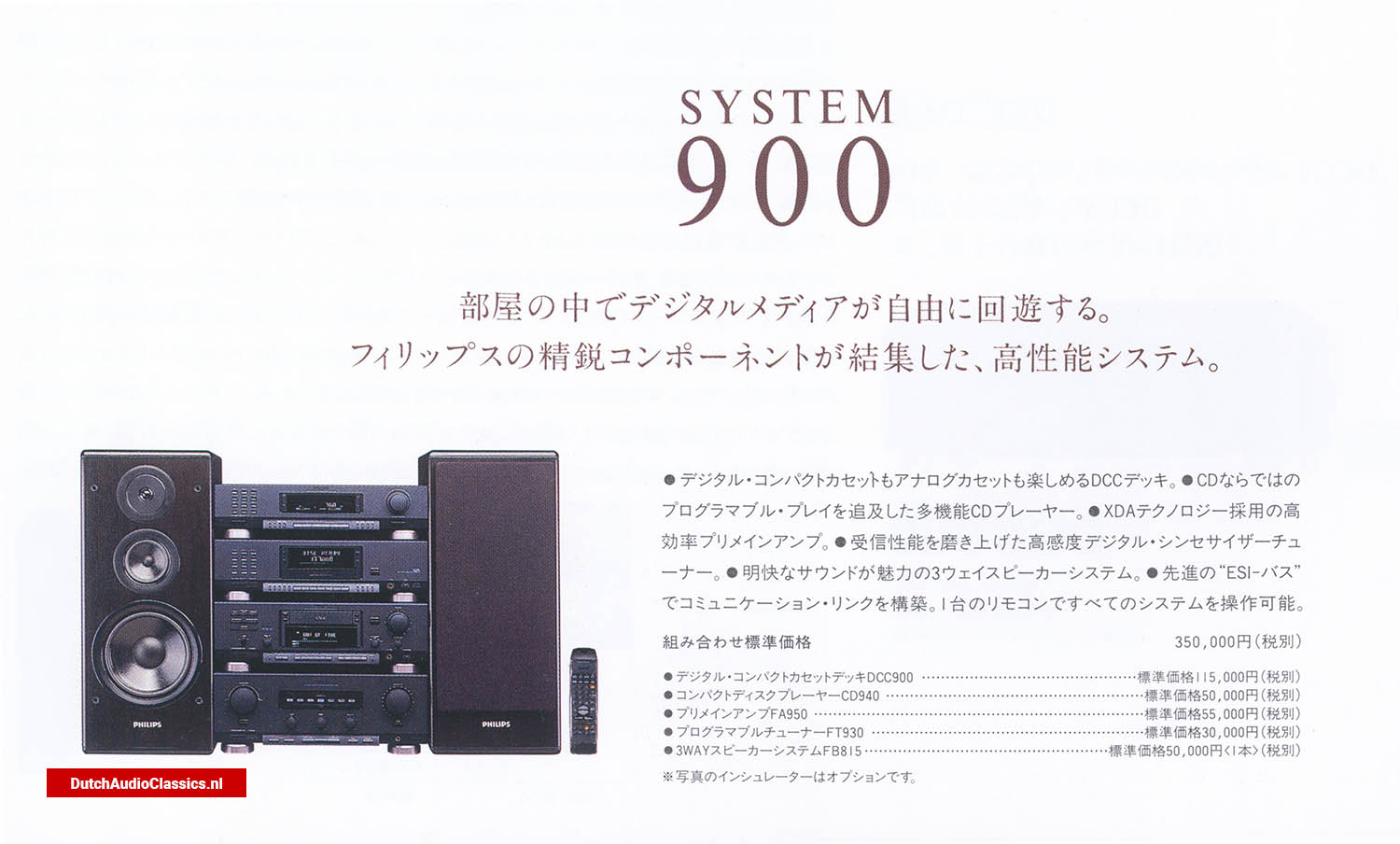 Highly extract all the musical information inscribed on the disc.
The best selection for CD fans, with a high level of perfection as a system. 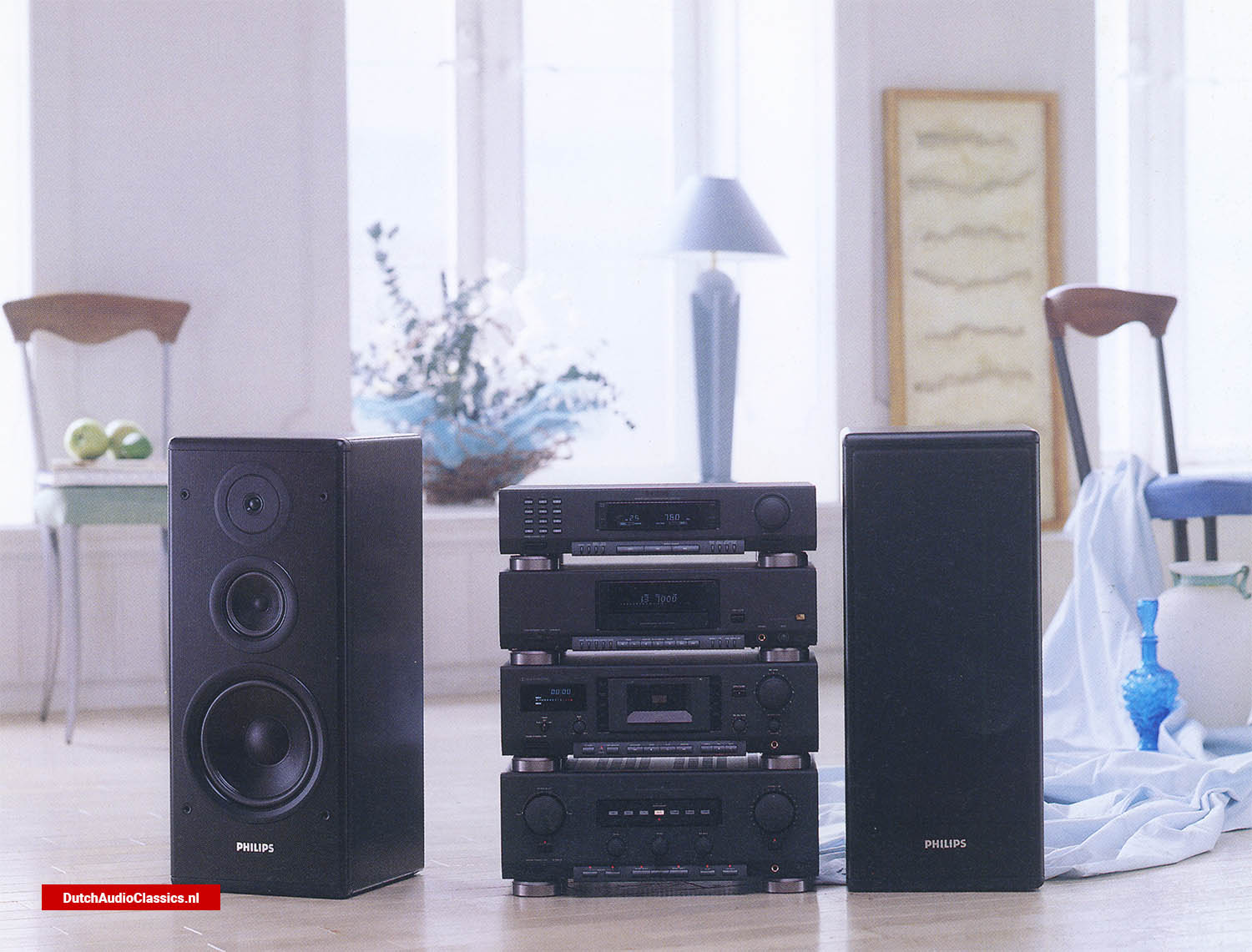 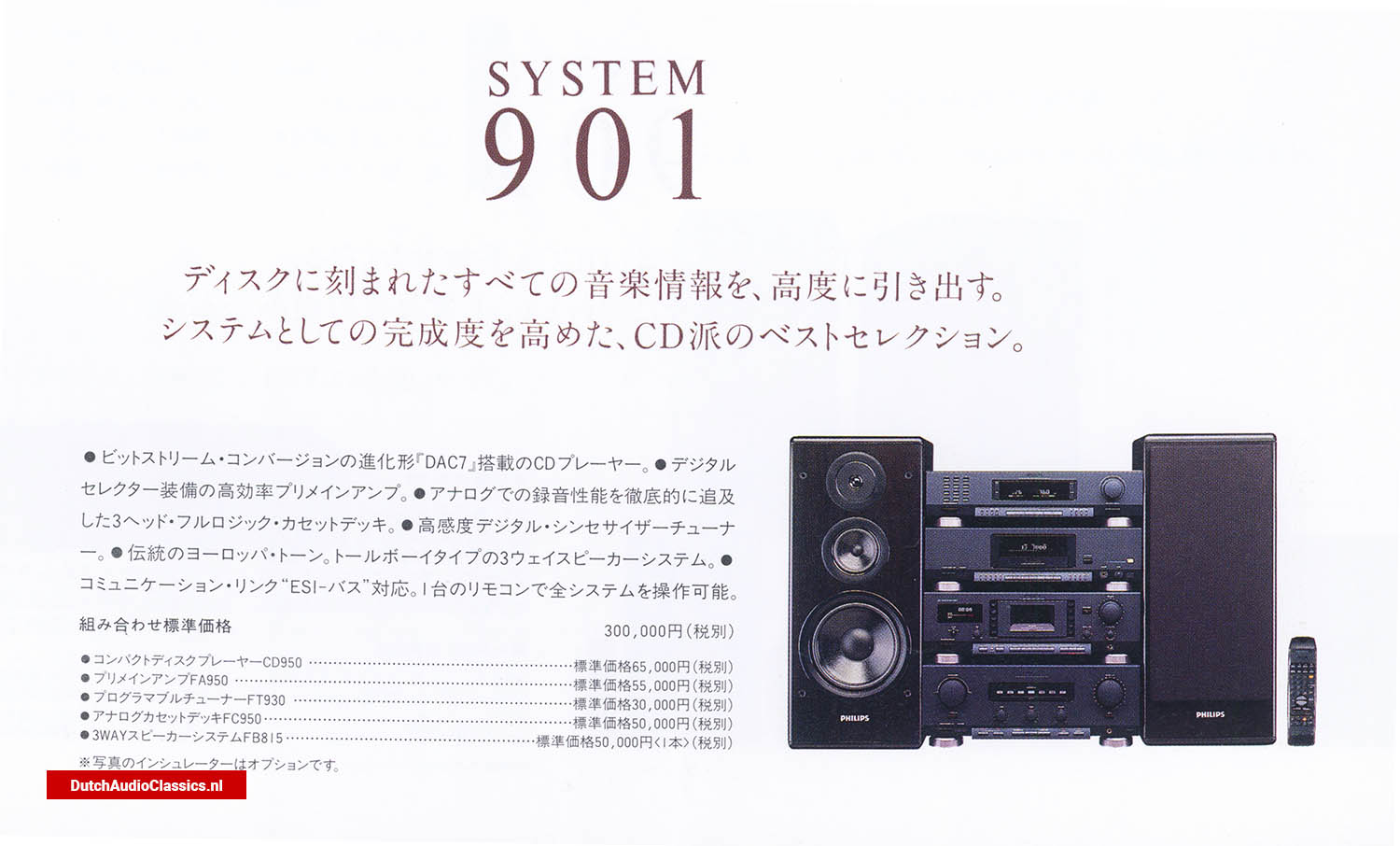 If you like CDs, you won't be able to let go of DCC.
A high-quality sound combination that lets you enjoy the real pleasures of digital music to the fullest. 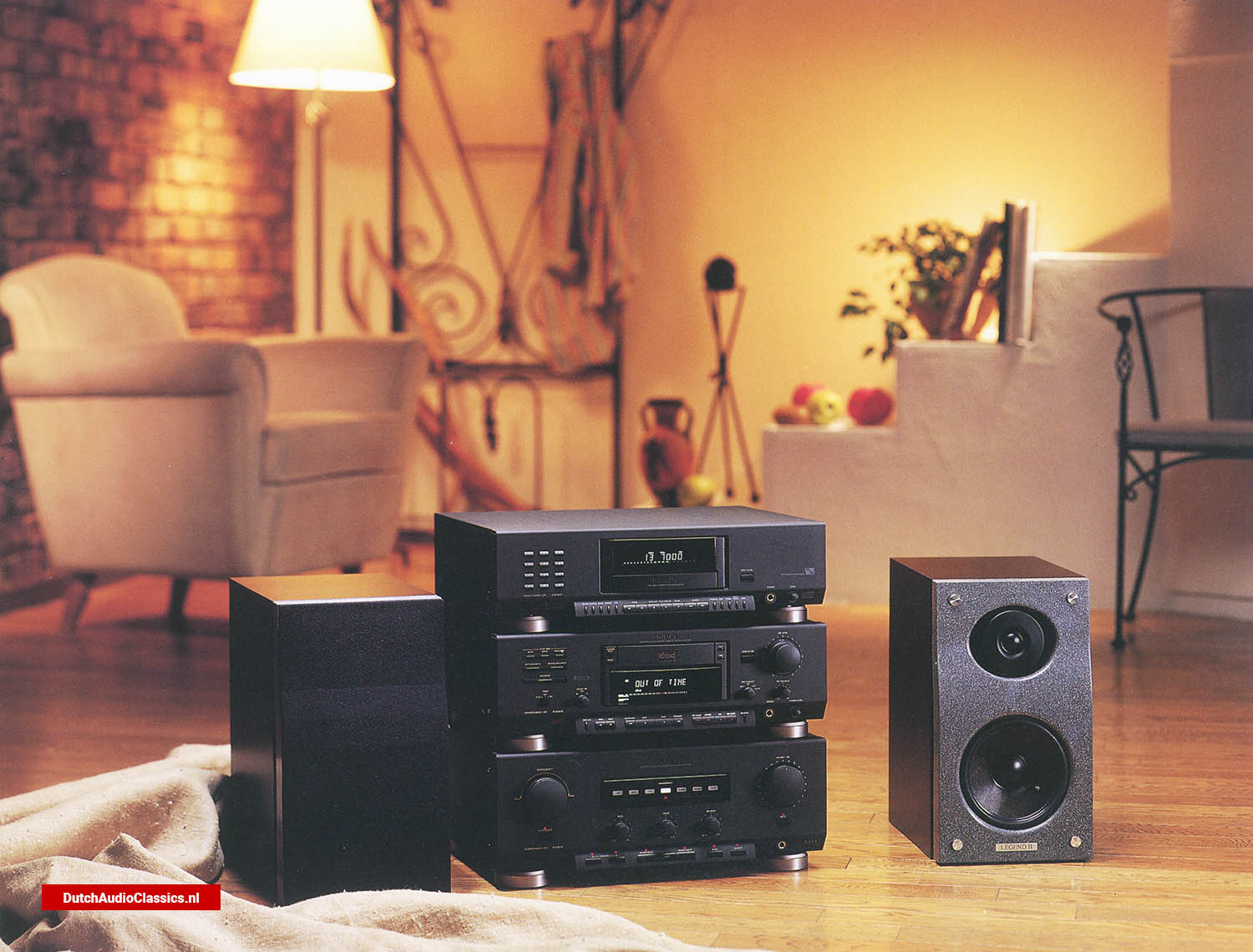 CDs and DCCs are easy to enjoy and simple to listen to. It is a privilege of digital media to be able to taste the individual sound colours in the music. The passionate breathing of a vocalist or the sliding strings of a bassist: with CDs and DCCs, the hearts and minds of the artists are replayed in real life right before your eyes. The System 902 is a combination for those who simply want to enjoy CDs and DCCs. It includes a DCC deck that can also play PunaLog cassettes, a CD player with "DAC in", and a CD player that brings out the full potential of digital sources. The Philips series 902 is a combination for those who want to enjoy CDs and DCCs in a simple way. 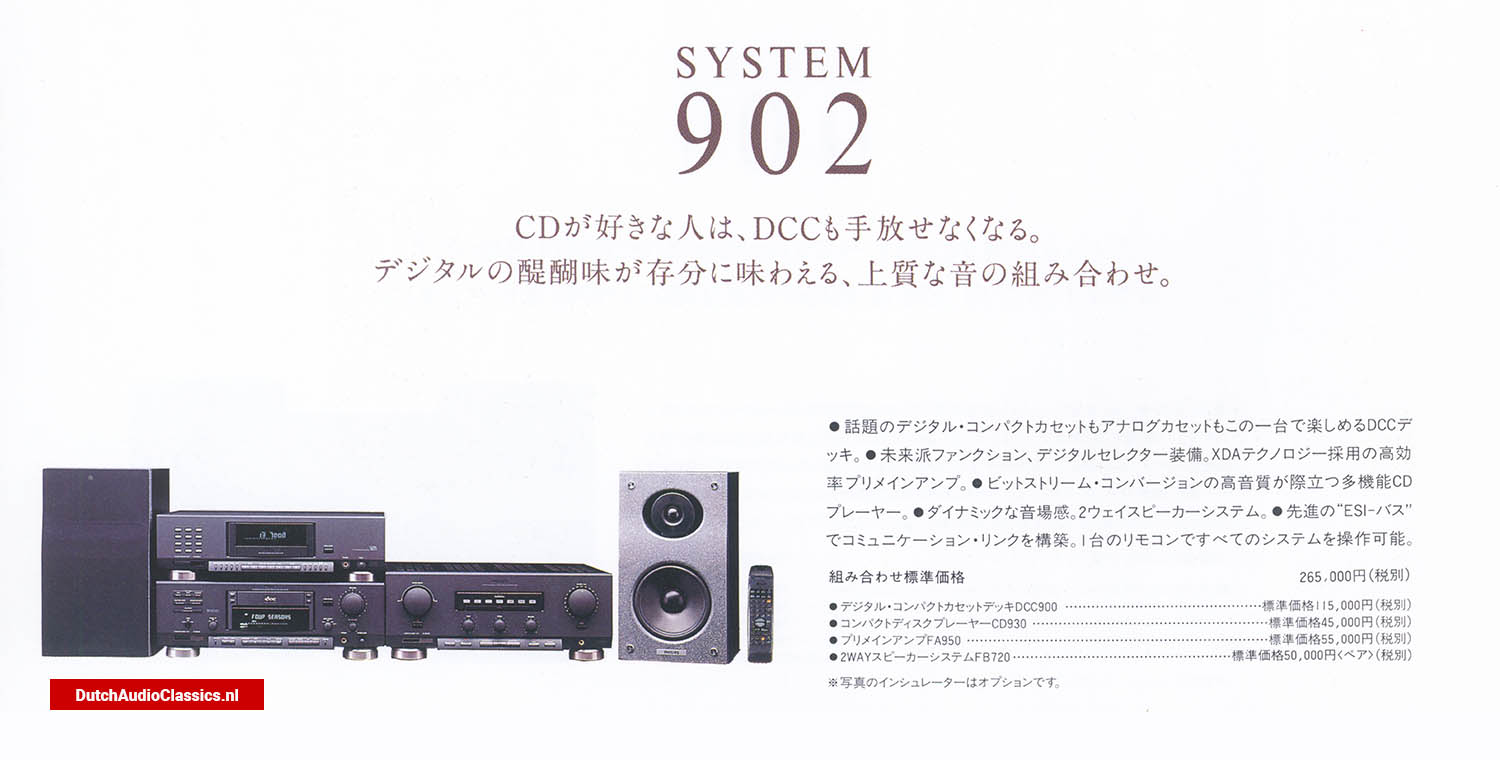