AMSTERDAM - Less than a week after the official introduction of the compact disc player, the inventors are feuding.

Philips, Sony says, is killing a potentially huge market by pleading in Brussels to double import duties on Japanese players. Currently, Sony's compact disc player, like other electronics from Japan, is artificially raised in price by 9.5 percent at the borders of the European Community.

The European Commission thinks 19 percent for the compact disc player is better. Then the European electronics industry (Philips) would have a better chance of gaining a reasonable foothold in its home market and not go the way of video recorders, where Japanese manufacturers control about 80 percent of the European market, it is argued.

Sony, with Hitachi in its wake and the other producers of the futuristic hi-fi equipment, are furious. It is acknowledged, that Philips invented the system, but in close cooperation with the Japanese, the player was further developed technically and commercially. All manufacturers have adopted the Philips system, so that one can justifiably speak of a world standard.

Philips only benefits from this. After all, the company is also the producer of the silver plate that holds the music evoked by the player's laser beam. The more compact disc players of any brand in circulation, the more discs with Philips labels are sold. A Japanese argument that is impossible to understand.

There are more arguments against the planned action of Brussels. When the Sony player (retail price 2495 guilders) goes up another 9.5 percent in price, it becomes very expensive, even though you can control it remotely unlike the Philips player which costs 1995 guilders. And an expensive Sony player hardly gives Philips any incentive to lower its equipment in price. Two similar disadvantages for the consumer.

But European consumers have themselves to blame, it can be seen from the European Commission's argument. Music lovers in Japan are said to be much more fashionable. As soon as there is a new invention on the market, everyone runs to the store. Consequently, the industry can start production on a much larger scale and thus produce more cheaply.

An original invention by Philip who whispered this to the Commission. Practice seems to prove the prompter wrong. According to the reports of retailers, immediately after the introduction of the compact disc player a demand arose that exceeded all expectations. This applies to both Philips' and Sony's product. Both manufacturers estimate sales in Europe this year at 100-thousand units of which Philips will account for 60 percent. However, Sony's estimates are based on the assumption that the artificial price increase will remain unchanged, while Philips is aiming for a smooth start of the new invention.

Hopefully, during the upcoming tariff negotiations in Geneva, the European Commission's request will be rejected. Not only in the interest of the consumer. Nobody benefits from the ever higher tariff walls being erected around Europe. Not even Philips, the company that relies on free trade and was a step in the right direction by persuading the Japanese to opt for the Eindhoven system. In the store it is decided whose products are preferred. 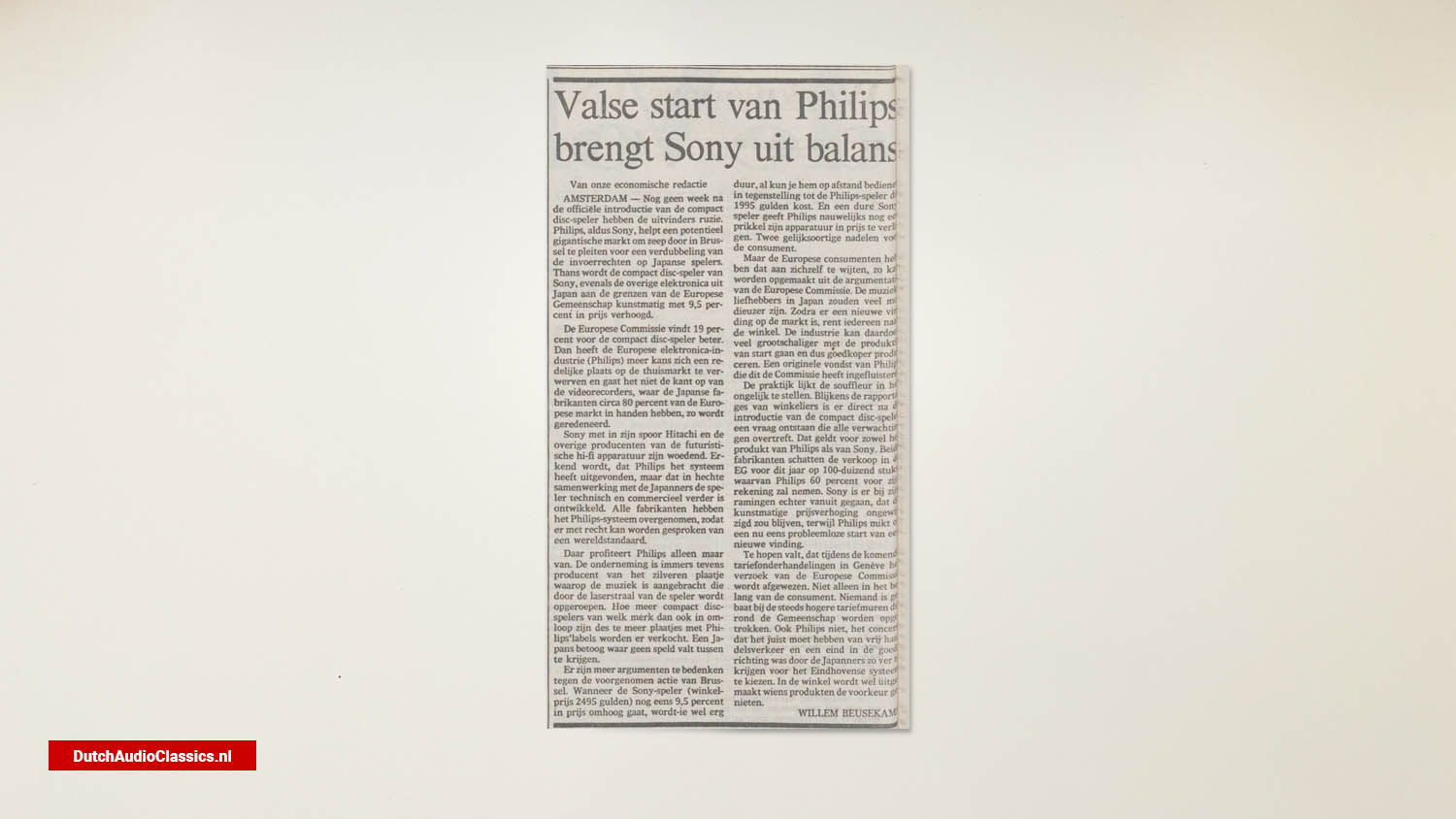