AMSTERDAM - This day, March 1, 1983, will go unnoticed in history as it inexorably heralds the end of the LP. For twenty-five years they have shared life's joys and sorrows, the music lover and the longplayer, but as of today, the compact disc is on the market, and within a decade or so, the LP is expected to be done with.

His Master's Voice no longer rattles in the faithful dog's ear via a needle that dances along with the grooves of a vinyl record, it is now an infrared laser beam that reads the signals from a metal plate and converts them into music. Whoever hears the result becomes enraptured; the reviews are jubilant.

The record industry has entered and new era. The invention is considered a technological revolution that can be compared to the switch from Edison's wax reels to today's gramophone record.

The research took about ten years, and like so much news, the compact disc actually came about by accident, as a by-product of the picture plate. The system was invented by Philips and reached the market in a remarkably quiet manner, considering the history of the gramophone. Edison argued for years over his device with Frenchman Cros, who also claimed the invention. That actually lasted until the centenary of the gramophone in 1977, when the Americans' plans for the centenary were overtaken by the French. Before Edison could be commemorated, France had already gloriously celebrated the centenary of the gramophone, and at that, Edison's name was not to be heard. Panting

Now two companies go hand in hand. Philips invented the compact disc and developed the invention further with Sony. Together they introduced their new players to the market today, with the rest panting behind. A comfortable lead that will not be caught up with for several years. They can afford to conquer the market systematically.

In addition to the Netherlands, the Philips and Sony players are on sale in England, France and Germany as of today, Belgium, Switzerland and Sweden will follow next month, and so will a group of European countries every month until the jump across the ocean to America in the fall.

Japan had the first, where Sony launched the compact disc in October. Unable to keep up with demand, the industry there quadrupled production.

In 1979, Philips came out with the compact disc: a mercurial little plate 11.5 centimeters in diameter, not much bigger than a beer mat, which holds an hour of uninterrupted music.

Virtually indestructible, impervious to scratches and dirty fingers. Without ticks, noise, splashes and hums, singing along, jolts and vibrations. The salvation for a market that has been plummeting for three consecutive years?

The music is hidden inside the disc in a spiraling trail of microscopic pits, more than 15 billion per record, pressed into a metal surface, to which a thick layer of hard plastic is sprayed. A laser beam reads the signal.

The advantages are: no more contact between needle and plate, causing wear and tear, and the plastic layer prevents be damage. Scratches, nicks and fingerprints are caught in the plastic, which the laser reads through.

At the same time, the whole system between recording of music and pressing of the record is simplified so that no disturbances can occur there either. Philips' recommended retail price for the new player is 1995 guilders, records cost 39.90 guilders (popular) and 46.50 guilders (classical).

Jubilant were the first reviews: "So much better, it's really like being in the concert hall now." Infinite is the expectation of the miracle in a market that was getting worse and worse in recent years, and great is the confidence of the trade at a time of ever decreasing spending. In compact disc, the industry's hopes are pinned on the future; there are few there who wonder if the disc will make it.

Philips has two types, matched to most common HIFI equipment because they do not require separate boxes or amplifiers. Sony has one model.

Philips has resold the invention to forty companies; Akai, Alpine, Dual, Hitachi, Kenwood, Mitsubishi, Pioneer and Sansul are expected to follow with a compact player in the foreseeable future.

At the Philips factory in Hasselt, Belgium, ten thousand players a month roll off the assembly line; that number could easily be increased and even doubled, a production aimed at all of Europe and America. Sony expects to convert fourteen thousand players in the Netherlands this year.

The record industry is turning even, with, of course, Philips again in the lead. PolyGram (Philips and Siemens) is putting 160 compact discs on sale today, then twenty to thirty more a week, by the end of the year there should be a choice of five to six hundred records. All of PolyGram's brands and labels are in the first wave: Deutsche Grammophon Gesellschaft, Philips, Decca, Polydor, Archiv Produktion, Mercury, Casablanca. Neatly divided into classical and popular.

All the new recordings from the PolyGram companies are immediately transferred to compact disc, otherwise richly drawn white the old material.

"A gigantic operation," said PolyGram spokesman J. Rubinstein. "We feel a little stunned, people are cheering." Initially budgeted at four million records, production has been boosted to 5.6 million. Still a fraction of what LPs are pressed. The PolyGram factories around the world still produce between sixty and seventy million.

At PolyGram all music has been recorded digitally for several years, so switching to digital pressing was not a problem. In 1980, a plant in Hanover was converted for the new system. It is currently the only factory in Europe where this is possible, even the record companies competing with PolyGram with their compact discs have to go there.

Rubinstein has great expectations given the experience with the new invention in Japan. In Japan, 30 thousand players were sold within three months, with an average of ten records purchased. Production in Hanover is based on those cifers. He expects that in the Netherlands between fifty and one hundred thousand players will be sold within a short time.

"You would say that time is against us, but if you already see how many compact disc players are flying out the door; people are bliikly keen to learn about new things."

Other companies are significantly behind Polygram. RCA, for example, currently has only eighteen discs, all classical, on offer. A huge delay in the production process is to blame, according to spokesman A. van der Kroft.

Twenty-five to thirty discs will be added at the end of August, and popular music will also be released. And ten every month after that. RCA must also have its records made in Hanover. "Our hands are tied," he says. The company expects PolyGram's monopoly to be broken before the end of the year. One factory is too few if you also want to conquer America, Canada and Japan. RCA had wanted to bring production forward for this purpose, but interest is so great that the Hanover plant cannot handle it. It is expected that within a year the various record brands together will have about a thousand titles on the market.

The LP has existed for a quarter century and expressed a love of music for more than a generation. From Bach to the Beatles. But in the last three years, sales have plummeted. In England, LP sales dropped from eighty million to sixty million units, the latest figures from last year (July-September) showing a 21 percent fall.

Home overwriting on music cassette is the biggest culprit. You can still do that with the compact disc, but just the unique crystal-clear sound of the silver record is lost with it. The disc was invented in "a time when piracy did not plague the market as strongly as it does now, but the trade hopes to have found an answer to it with the disc. In any case, it has made the black pressing of records impossible.

That sound has been heard and hatched more often (as with stereo) or failed (as with quadraphony). The disc seems to have more of a future, if only because in a few years the industry may decide to make only compact discs. Between five and 15 years, the LP will still be given.

Much has changed since Edison voiced the nursery rhyme "Mary had a little lamb, its fleece was white as snow, and everywhere that Mary went, the lamb was sure to go" with much noise on the first wax roll. The reel became (78 rpm) record and then LP, the gramophone became sound system and with the entry of the disc "digital audio system" via the "Pulse Code Modulation." Other developments are just around the corner. Because soon, of course, that old amplifier and those boxes will no longer suffice. The new disc is so small and fragile, you can see it installed in the car in no time.

There is one big disadvantage. Composers, who have already experienced this with the introduction of the failed quadraphonic sound system, fear that the companies will put everything back into improving the technology and not into expanding the repertoire. So again all of Beethoven's symphonies under Von Karajan but audio digital. 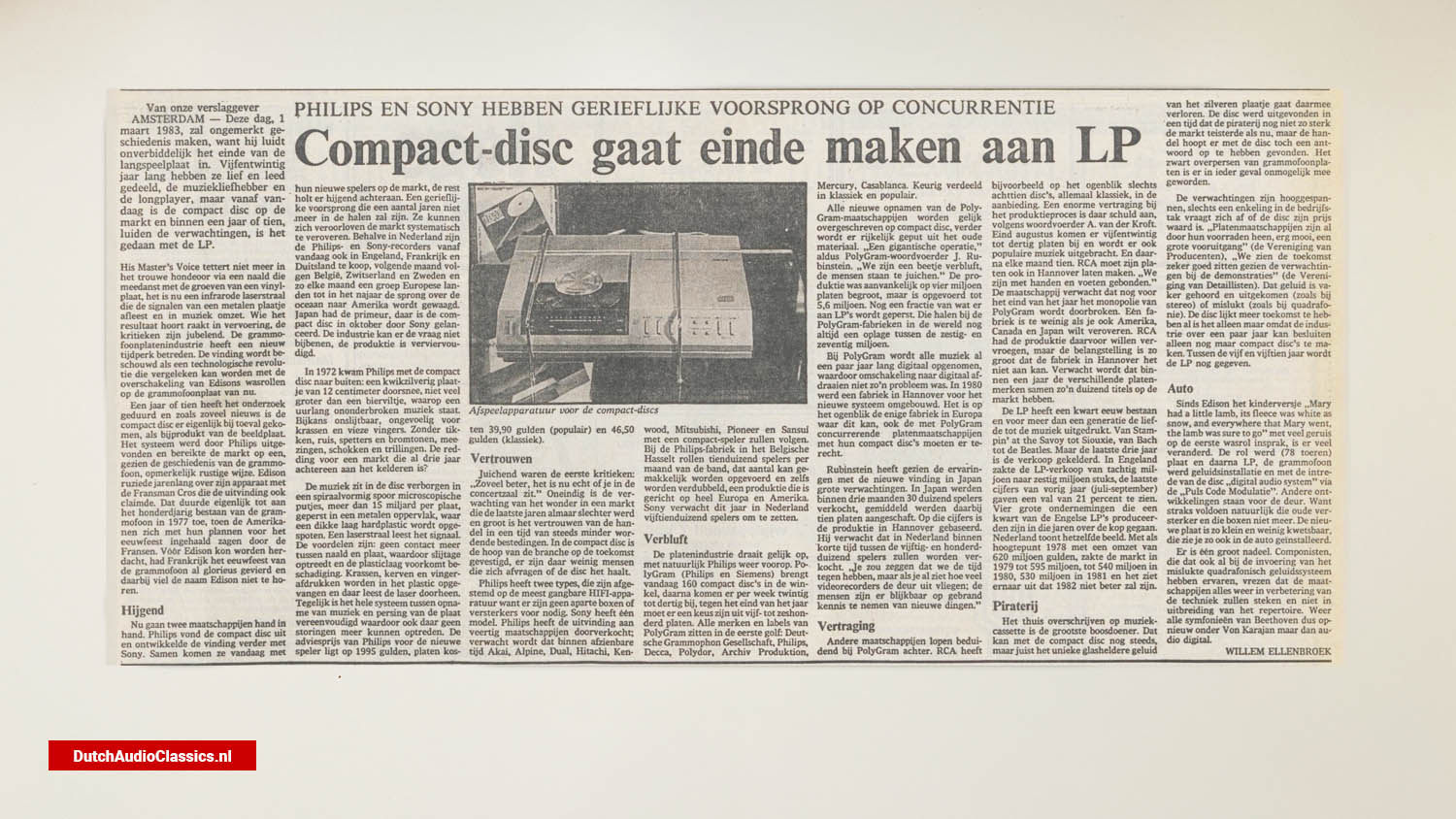