The hesitation that Western Europeans (and especially the Dutch) often have when it comes to getting excited about nnew developments In the electronic home industry (video and audio equipment) is absolutely nonexistent in Japan.

The compact disc, for example (the gramophone record, only twelve centimeters in size, which offers perfect music quality and is "played" by means of a very thin laser beam) is rapidly making its way to the public there.

Since compact disc players and compact disc records went on sale in October 1982, more than 35,000 players have already been sold. That is, on average, between 2,000 and 2,500 devices have passed over the counter each week. And that while the players in Japan -just like in the Netherlands- cost around two thousand guilders and also the discs -just like here- cost about forty guilders each.

Noboyuki Idel, general manager of Sony's hi-fi audio division, zel last week in Tokyo that one can speak of a "big boom." According to Idel, the audio industry desperately needs such a boost, too.

After all, the hi-fi industry in Japan is no longer growing. While there is still an increase in demand for portable equipment, Japanese exports of hi-fi products last year, for example, were already almost a quarter lower than the year before.

So the compact disc seems to be a godsend. Its Japanese manufacturers (Sony is currently the leading one, partly because it developed the system together with Philips and was thus able to lead the way) have great expectations.

Idel: "The first reactions from the Japanese public have exceeded our wildest expectations. In the beginning, of course, it was mainly the freaks who bought a compact disc player, but we are convinced that the general public will also become increasingly interested in it.

Surveys have now shown that Japanese buyers of the compact disc are mostly 25 to 35 years old. They are the ones who already have a decent position in society and can afford such a reasonably expensive device. By the way, will that price drop soon?

Idel: "We know the prices are high, especially in relation to conventional record players, but so much development money has gone into the system that the prices can't come down quickly. We will, however, as an Industry, give the devices more and more features, so that the consumer still gets value for money. I expect that for the time being the compact disc should be seen as a sound system in addition to the existing systems.

According to Idel, the Japanese market is the most important for his factory and Philips will focus mainly on Europe. That said, the Japanese industry still wants to export a hundred thousand players to Europe, and of that number Sony (Japan's largest audio industry after Technics and Pioneer) will account for thirty thousand.

Idel also said he expects that in about five years as many compact disc players will be sold as conventional turntables. After that, the ratio will keep changing seller in favor of the compact disc.

The biggest concern Of the compact disc industry is the software, that is, the records themselves. Idel: "We will have to convince the record manufacturers to join in and dare to invest. A key factor is that the U.S. industry comes along fast. Half of the record market is in America and we hope America will join in."

It will not be up to Sony itself (and in Europe to Polygram), by the way, that enough records will become available. Sony/CBS, a company in which Sony and the record company CBS each participate for the has, has greatly increased record production in the short time.

Its plant in Shizuokaken, southwest of Tokyo, makes 250,000 records a month. That number will be increased to 350,000 a month during the year, and starting in 1984 production will reach half a million records a month. In Europe, Polygram will produce the same number monthly.

The number of titles available in Japan is not that high yet. At the introduction in October last year, only fifty titles were available and by the end of the year that number had risen to about 150.

At the start of sales in the Netherlands - on March 1, around two hundred titles were already on sale. This number is expected to rise rapidly to one thousand by the end of this Year. Of these, most will probably include classical music.

The question remains how the compact disc reached the public in the Netherlands. BIj Philips in Eindhoven speaks of "more than expected and more demand than we can answer."

At Brandsteder Electronics BV in Badhoevedorp, importer of Sony, the demand is so much more than expected that in order to be able to continue to meet the demand - in Japan an extra quantity of players has been ordered. These will also be transferred by plane instead of boat, so that customers do not have to be put on a waiting list. 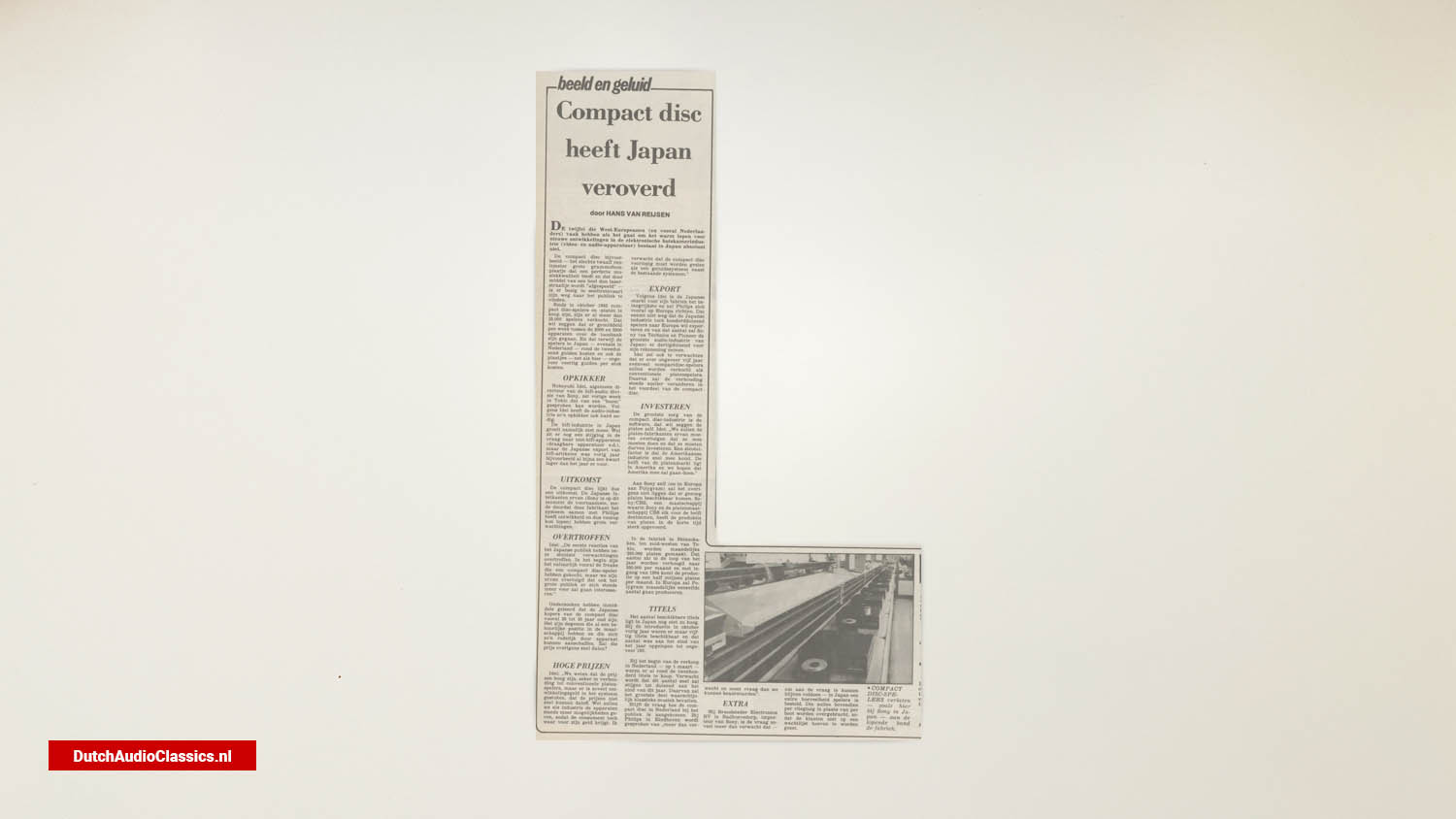