The industry is already heating up the market. Two giants are leading the way: Philips and Sony. They really already have players with which one can play the musical wonder of this century, the Compact Disc. In total, there may be about 400 of these devices in the Netherlands. They are very expensive and cannot (yet) be purchased by individuals. Besides, who has about 2000 guilders lying around to buy yet another audio device?

Yet there is great interest in the 12 cm-small, silvery record, which contains music only on one side. Because despite its size, it plays for an hour. That's longer than an ordinary long-playing record. Its average playing time is about 40 minutes to three quarters of an hour. That's the first miracle. The second miracle is the noise freedom and richness of sound. The channel separation between the sound from the left and right speakers is great. The record cannot wear out, and scratches hardly affect the sound: they sense inaudible.

CD players are rare, but getting hold of discs is an even greater art. For although the Compact Disc is already being marketed in Japan, even there Discs are scarce. True, a number of titles have been produced, but most of them are demonstration discs with some short pop songs and a few parts of major classical works.

In Japan (in the Netherlands the discs will cost about 40 guilders) 'no' has to be sold often. Many Compact Discs, although listed in the catalog, are sold out.

This is also evident at demonstrations in the Netherlands. What the retailers in Japan can confirm, is also experienced in the Netherlands. Again and again, the "handy" discs disappear, so they cannot be easily replaced. The fact is that there are only two factories in the world that can handle the production of Compact Discs. The largest is in Hanover. It belongs to Polygram, a company half owned by Philips and half by Siemens.

Under exceptionally strict conditions, the Compact Disc is produced there. Because of the high information density, or in other words the enormous amount of music on that one side, the disc in its "naked form" is very vulnerable.

In relation to the pits (of about a micron) in which the music is captured in computer language, a substance is the size of a pebble. Hence all the records are also checked piece by piece before they leave the factory.

The other factory belongs partly to Sony, partly to CBS. It is in Japan and produces primarily for the home market. Most of the production from Hanover goes to Japan. That would be about 50 titles. However, when sales start in the Netherlands - in March - there should be about 200 different discs from Polygram alone. But that promise was there before. And still the discs are scarce. It is quite possible that the difficulties, which arise in the exceptionally dust-free production, were underestimated.

Meanwhile, two types of players are on display for demonstration purposes at the dealer. One from Philips, the CD-100, which should cost about 2000 guilders. It is a simple player, which does not exploit all the possibilities offered by the system.

The CD-200 would, but has not yet been shown. The other device on display in some stores comes from Sony, which from its inception co-developed Compact Disc equipment with the Dutch factory.

The device (CDP-101) is a marvel of ease of operation and can also be slid between existing equipment or into and bookcase: it is a so-called "front loader. It also has numerous tricks for playing the songs on the record interchangeably, indicating the duration and quickly looking up a particular musical passage. Even the player is equipped with remote control. It will cost about 2400 guilders in stores.

For the first time since Edison invented the recording of sound, a breakthrough in principle has been achieved. The verse "Mary had a litlle lamb" spoken by Edison in the wax roll and returned oh so dimly. eventually led to today's long-playing record. Although many intermediate steps were needed to get such quality into the gramophone record as it is today, the principle of "mechanical transmission" through the cutting chisel and pickup needle, remained untouched.

The Compact Disc radically breaks with that. The scanning of sound is done by light. Laser light to be exact and thus the sound carrier (the record) is aging-free because there is no more wear and tear. Also, the sound is no longer stored in hills and valleys - as with Edison - or lateral sways in the grooves of the record. The music is fixed in a kind of computer language, infinite pits per centimeter. That gives the possibility of capturing 50 to 100 times more information. The playing time (in code) is also recorded in these wells. They also control the tracking of the laser beam on the plate. There is even room for text, for example the lyrics of pop songs or the libretto of an opera, which can appear on a TV screen at the same time as playback. Because the information in the picture is covered with transparent plastic, it cannot be damaged.

Fingerprints and scratches will not throw off the laser. Should a piece of record be really illegible, the "decoder" in the player quickly calculates how the transition from the preceding sound to the following sound should be approximately. Interference is then not audible. There is also the already mentioned full separation between left and right channel and and perfect sound quality.

The absence of mechanical scanning also means that no "rumble", motor rumble of the turntable penetrates into the sound. Furthermore, due to the 'arithmetic processing' of the sound, equalization (whine) is unconditionally guaranteed. Noise is a phenomenon that plays hardly any role in the conversion of computer language into sound. Distortion is virtually immeasurable.

According to music experts, digital reproduction has only one disadvantage, which comes to light when listening to classical music. The reproduction of violin music, for example, sounds loud and shrill. Theoretically there is hardly any explanation for this. There are still too few Discs to pass judgment on this. But you have been warned. 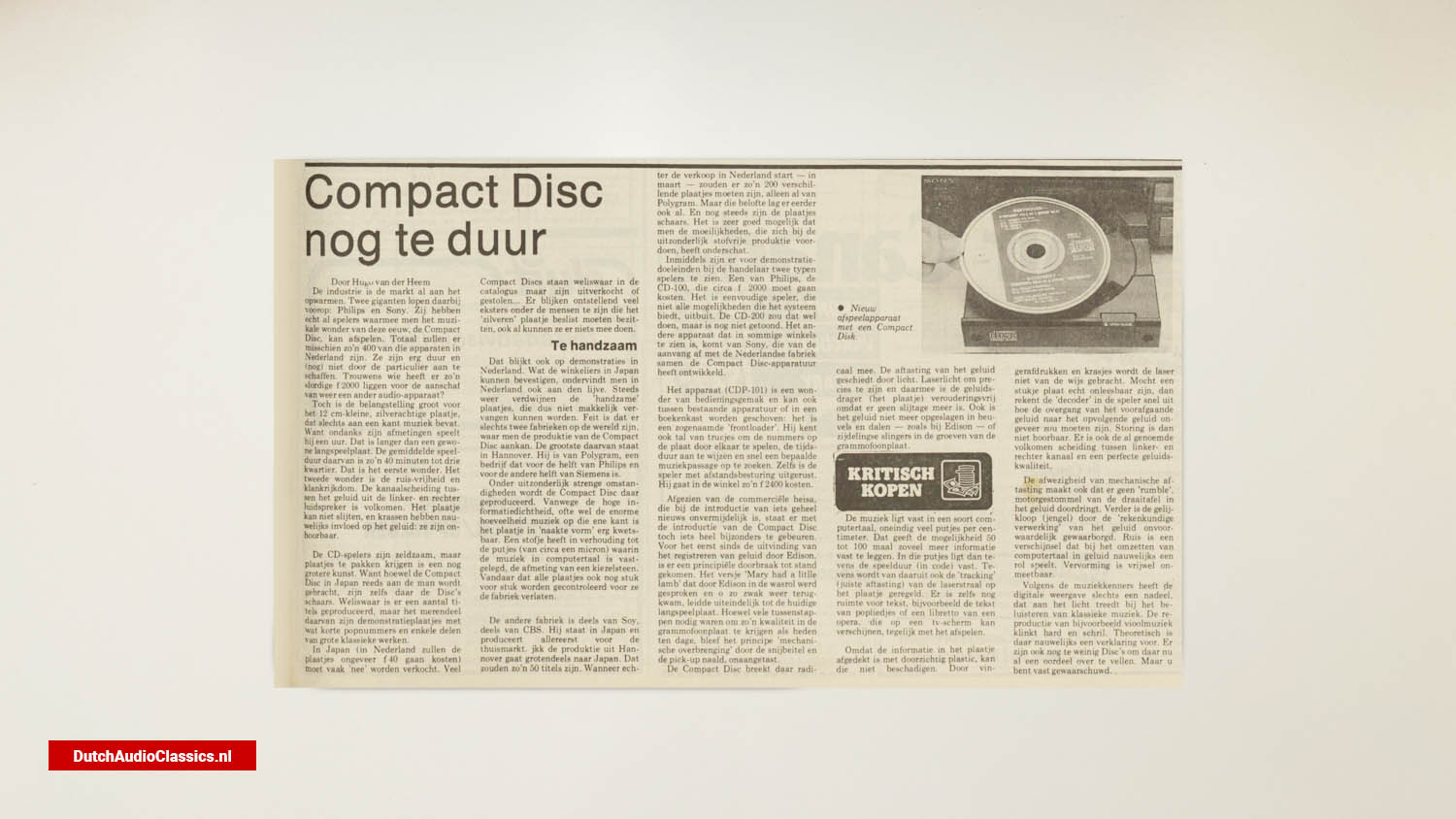