The Compact Disc, about which so much has been written before its introduction in a few months, can be connected to any normal sound system. At least that is what the leaflets and articles about this unique digital record tell us. And in a few experiments, everything seems to work excellently, too.

On first hearing, because several amplifiers and loudspeakers turn out to be no match for the "violence" of a Compact Disc after all. Although the adaptation between Compact Disc player and amplifier is usually excellent, the sometimes very high dynamics of the Compact Disc can throw a spanner in the works.

By the way, the cry of 90dB dynamics, with which some tout the "CD," is literally madness. For what does that mean? Dynamics is the difference between the softest and loudest passage in a given piece of music. That difference is indicated by the unit decibels, usually abbreviated as dB. Because the large dynamic range must be handled by an amplifier, we are dealing with power amplification, and for 90 dB of dynamics, that means power amplification of ten to the ninth or 1,000,000,000.

An example. We assume that the softest passage in a recording (0 dB) requires from the amplifier an electrical power of one thousandth of a watt (0.001 watt). No problem; most amplifiers can deliver 20 watts or more.

But now the 90 dB. At such a point, the amplifier must deliver power of ten to the ninth × 0.001 watts, which is one million watts! Do amplifiers or loudspeakers with this power exist? No, and they are not coming.

Compact Discs with a dynamic range of 90 dB are also not on the market. As far as is known at the moment, it will not go much further than 40 to 45 dB with perhaps an outlier of 50 dB. For the latter, according to the above example, the amplifier must be able to deliver a power of ten to the fifth × 0.001 watts = 100 watts (per channel).

Now this does not simply apply to every amplifier/speaker combination. This is because the power an amplifier can deliver says very little about the "loudness" of the sound the speakers reproduce. The efficiency of the speakers also plays a role. Naturally, a loudspeaker or sound reproducer has and very low efficiency.

Some barely reach one to two percent and others reach four to five percent. This means, that of the supplied electrical power 95 percent or more is converted into heat! It also means, that a reproducer with two percent efficiency must have much more electrical power than a reproducer with five percent efficiency, to achieve the same loudness (sound level) in the room.

Therefore, the example does not hold unconditionally; if the reproducers have high" efficiency, then the amplifier can be smaller than for reproducers with "low" efficiency.

However, those who want to use the Compact Disc player primarily to listen to classical music will need an amplifier that delivers about forty watts of power. More is allowed, less is just fine.

This also applies, of course, to the load capacity of the speakers. If the CD player is used for pop music, then the amplifier may be less powerful. This music has - in comparison with classical music - usually little dyslexia namlek. At 15 to 20 dB, it will do. But it is wise to keep forty watts as a minimum.

One might conclude from this that the CD manufacturers provide incorrect information about dynamics. However, this is not the case; the Compact Disc can register dynamics of 90 dB, but because the Concertgebouw Orchestra simply does not fit into the average living room and the appropriate electronics are not available, it does not happen.

This enormous "dynamic range" does have another positive side, however, namely the signal-to-noise ratio. It is also 90 dB with the Compact Disc, which means that there is practically no audible noise. If there is any (very weak) noise, it comes mainly from microphones, ambient noise or air conditioning.

Finally, enthusiasts also mention. that the channel separation is about 90 dB (normal plate about 30 to 35 dB). That means, as someone said recently, that the violins should be on one side of Rotterdam when recording and the cellos and basses on the other. But again, the reality is - fortunately - in the middle. When recording orchestral music There is always a natural crosstalk between "left and right." This is completely unimportant. A recording is not about left-right effects, it is about the stereo sound.

Because of its characteristics, the ordinary long-playing record can detract quite a bit from that stereo effect, not to mention the pickup element which in turn can adversely affect the sound.

The Compact Disc itself is perfect and may certainly be called a milestone in the history of the phonograph record. But its perfection has consequences for the rest of the sound system, special for amplifier and reproducers. For those who do not have a suitable installation or do not want to modify their equipment, the purchase of a CD player is pointless. HE can better buy "ordinary" records for that money. 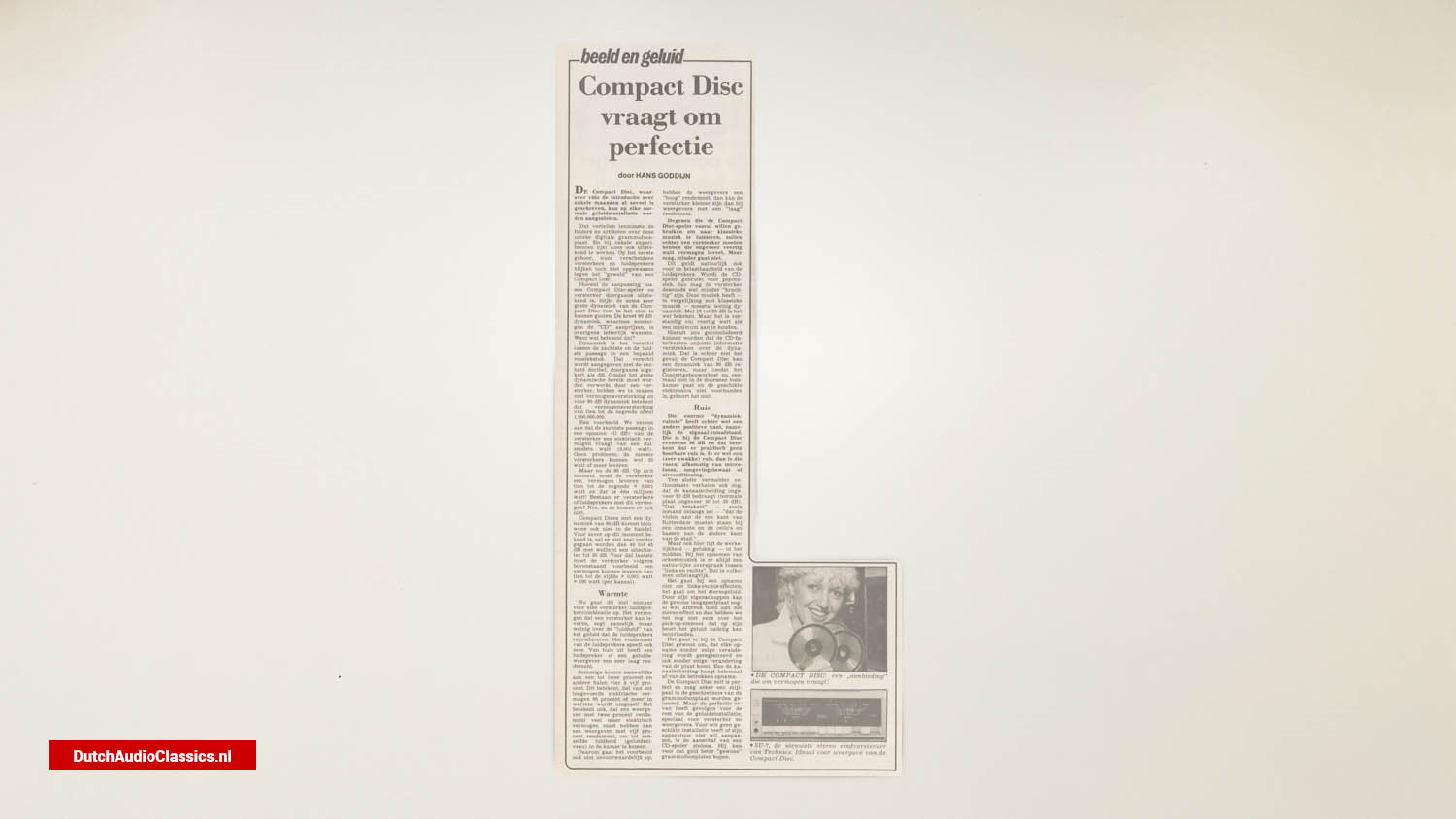