The compact disc (CD) is the fastest market conqueror of all time. Never before in the rich history of comsumption goods has mankind become so quickly hooked on a new product. The transition from the 78 rpm record to the LP was considerably slower than the current transition to the CD. The CD arrived just in time to bring the saturated record market out of the doldrums. Although only four years old, CDs already accounted for 22 percent of the total record market last year.

The history of sound reproduction is short. The first record player is barely a hundred years old. The famous Russian writer Leo Tolstoi, who was a great music lover, soon purchased such a mechanical record player with the famous horn.

According to our ears, the sound quality of these first players was exceptionally poor. The singing of the famous Caruso almost went down to crackling. After World War II, the long-playing record was introduced and the quality of sound equipment went up by leaps and bounds.

The sound storage on a long-playing record is analog. This means that the sound vibrations in the air are frozen in the grooves of the record, as it were. Because of the direct contact between the needle and the groove, wear and tear of the analog signal occurs. Who does not own a number of gray-turned records that actually need to be replaced?

With the compact disc, the sound signal is stored digitally on the disc in the form of pits. A tiny laser beam with a spot of light one-tenth micron (one millionth of a meter) scans the pits. Depending on the depth of the well, the laser beam reads a "zero" or a "one. All these zeros and ones make up the digital representation of the sound signal. The plate with the wells is covered with a transparent plastic layer, preventing damage. Moreover, the laser is not affected by dust or grease stains.

A CD player is made up of dizzyingly large and small numbers. One record contains about 700 million pits. These wells can store the information of 150,000 A4 sheets of text. It goes without saying that such an optical storage system is also suitable for countless other applications. Images, encyclopedias, road information, books, newspapers etcetera, in principle everything can be put on a CD.

So many wells on such a small disk means, of course, that each well must be very small, to be exact, about half a micron wide and two microns long. So the well is one square micron in size. Several thousand of these pits still fit in the cross-section of a human hair. The pit is only one-tenth micron deep. The depth of the well is critical. because it determines whether there is a "zero" or a "one".

Therefore, the depth of the wellije must be made with an accuracy of viif hundredth micron. Another problem is the stability of the laser relative to the disc. While listening to the compact disc, the laser must of course stay on track and not jump to the next row of pits. Through a sophisticated control system, vibrations cause the laser to wiggle less than one hundredth of a micron off sense track. The laser is as firmly attached to the disc as a bolt is to a steel plate. And yet the laser makes no direct contact with the disc!

The miracle of modern technology is that such a complex device as a CD player can be ge.produced for a relatively low price. There are now an estimated 3,500,000 CD players in the world and one hundred million CDs have been sold. If the DAT recorder does not throw a spanner in the works, then in five to six years the LP record will have been almost completely supplanted by the CD.

The compact disc is a great success. Philips can therefore be justifiably proud of this invention. The Eindhoven-based company is already developing other applications of the CD. Around 2000, presumably a quarter of the cars will be equipped with a car information system (CARIN).

This system will continue to be expanded and improved. Eventually, with the help of this system, the motorist will drive in a strange city as if someone were sitting next to him, showing him the way. Still this year, video discs will come on the market. These picture discs will be available in three sizes: a 12 cm disc, good for a five-minute video clip; a 20 cm disc, good for forty minutes of picture and sound; and a 30 cm disc good for a complete two-hour feature film.

Teenagers love music videos, and the small discs are particularly expected. These picture discs may become a craze. Record stores used to make a living selling singles from the Top 40. Soon the picture disc will keep them going and teenagers will swoon over their new Madonna record. 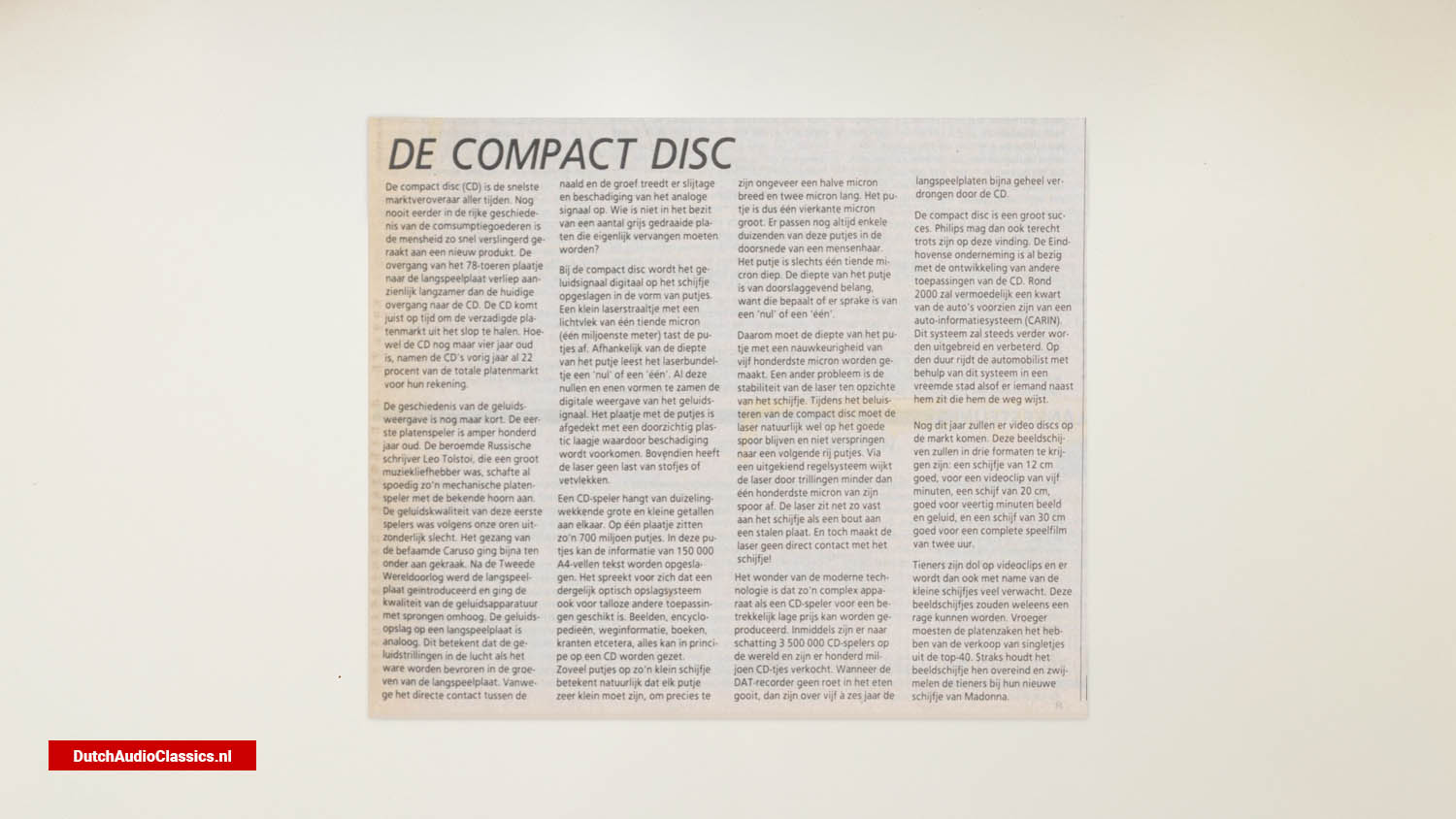