'The surprisingly rapid and unstoppable rise of the compact disc'Newspaper article Saturday, August 30, 1986

The advance of the CD Seems Unstoppable: This year, retailers are expected to sell more CD players than have crossed the counter in total in the three and a half years since its inception. Music disc sales will double from last year by an estimated two and a half million. And after the expected portable-CD, car-CD and CD ghettoblasters, Philips is already ready with new applications, such as use for computer, image opiag and the CARIN system for car drivers.

Despite the remarkable increase in sales, the point that the CD player will make the record player obsolete still seems far off. Philips foresaw a year ago that 1986 would be the year when, for the first time, more CD players than pickups would be sold. That expectation has now been revised: the inventor of the compact disc believes that sales of the digital playback device will exceed those of the analog pickup in two years.

Philips, the spiritual/ke father of the compact disc, is surprised at the rapid on-march. "We ourselves did not expect the device to have such success in such a short time," said J. G. Geel, Philips spokesman. "The audio market is a market with relatively expensive stuff, so you would expect that a really new method would take at least twice as long to become a competitor to existing audio."

Philips began developing a digital system in 1974 to replace the pickup. It would be five years before the existing Philips technology of lasers, computers, semiconductors, records and telecommunications resulted in the compact disc. Before that time came, Philips inventors first created laser vision, or picture plate. "Without the development of the image plate, there would be no compact disc at all," argues Philips spokesman Geel. The picture plate player is nowhere to be found in stores; it had to lose out to video, despite superior picture quality. This was mainly because the picture plate can only be played, it cannot be used to record. But the experience with picture plate did come in handy in the development of the new sound system.

In 1979 Philips was the first to show the compact disc to the assembled press, so that fellow sound equipment manufacturers would decide to license the manufacture of CD players. This was necessary because by now other manufacturers, with Japan's Sony in the lead, were developing similar systems.

Alarmed by Japanese competition, Philips went to talk to Sony. "We came to Sony with the system," says Geel, "we had nothing to offer at that time." But Eindhoven had learned its lesson with two other important inventions, the compact cassette and the video-2000 system. With the compact cassette, there was the 8-track, which competed for the favor of buying music lovers. And the drama with the video-2000 recorder, in which this better system lost out to competition from VHS and Betamax from Japan, had cost the Dutch multinational and heap of money.

"In this world and in this market you can't make it on your own anymore," Geel says. So much money has gone into developing the compact disc that you can't sell it as an alternative alongside other systems. So together with Sony, we made it the world standard." That happened in 1981, when almost all major electronics manufacturers opted for CD.

The wereid premiere of the CD was in 1982 at the Festival du Son, the French Firato, then a few months later the Amsterdam Firato was allowed to present the CD to the Netherlands. It was not until March of the following year that Philips thought the time was right to release the CD in stores. Even then, the battle was not yet over.

Although the compact disc was the world standard, Japanese manufacturers began an offensive by dumping CD players on the European market. After much pressure from Philips, the European Community decided in late '83 to double the import duty on Japanese CD players to nineteen percent.

The first CD players were expensive; around two thousand guilders. But Philips counted on sound freaks being willing to put down that amount. "There was a professional sound system then, suddenly affordable for the consumer. And the perfectionists, the sound maniacs were willing to pay that."

And Philips got it right. The CD players proved unstoppable; everything made sold. The heady growth of the last year is mainly due to the wide range of music coming out on CD. The price for an ordinary CD player is now around a thousand guilders, which is still almost three times the price of a normal record player. CD discs are also expensive: forty guid.

But what is important is that ninety percent of the "popular" records are now also available as CDs, while all the classic records that now appear are also on CD. This is quite an improvement over 1983, when the lucky owners of the first CD players only had access to one hundred and sixty classical titles.

However, there is still no solution for the single. Its short music time is far too expensive on CD. Phonogram, the Phlips subsidiary that is the CD distributor of the Netherlands, does launch a maxi-single next year, which should fetch about twenty guilders; but still six guilders more expensive than the conventional maxi-single.

Another promotional trick is that some CD versions contain music not found on regular LPs. British pop and video artist Brian Eno is so far the only one who has dared to release his work only on a CD; he considers his music too valuable for an ordinary LP.

The compact disc is a thin silver disc twelve inches in diameter. On one side of the disc are small pits burned into a spiral running from inside to outside. Those pits represent so-called zeros and ones, in which the music is stored digitally. In the CD player, the disc spins at three hundred rpm. The pits are read by and laser beam, preventing the disc from wearing out.

In theory, a compact disc has eternal life. Geel: "Of course, you cannot damage the CD with impunity. There is a plastic layer over it to ensure that fingers, dust and dirt do not touch the information on the disc; so the music has eternal life. But if the laser beam is interrupted by dirt, the player will turn off. The advantage then is that you can easily hold the CD under the tap."

The lifespan of eight years for the high-tech CD players is as long as that of ordinary record players, according to Geel. . "To make the quality of digital music playback optimal, the signal must remain digital for as long as possible," Geel said. "We are therefore working on digital amplifiers, where the signal is only converted into a normal, analog signal in the speaker."

The possibilities of CD can be expanded much further. For example, in the space where up to five quarters of an hour of music is now stored, text characters can also be stored. On one CD the entire Encyclopaedia Brittanica can be put. That is the future of CD-i, the i standing for interactive.

The latest CD players from Philips possess an extra output with which the CD can be used as a memory bank for the computer. In this way the possibilities are endless. 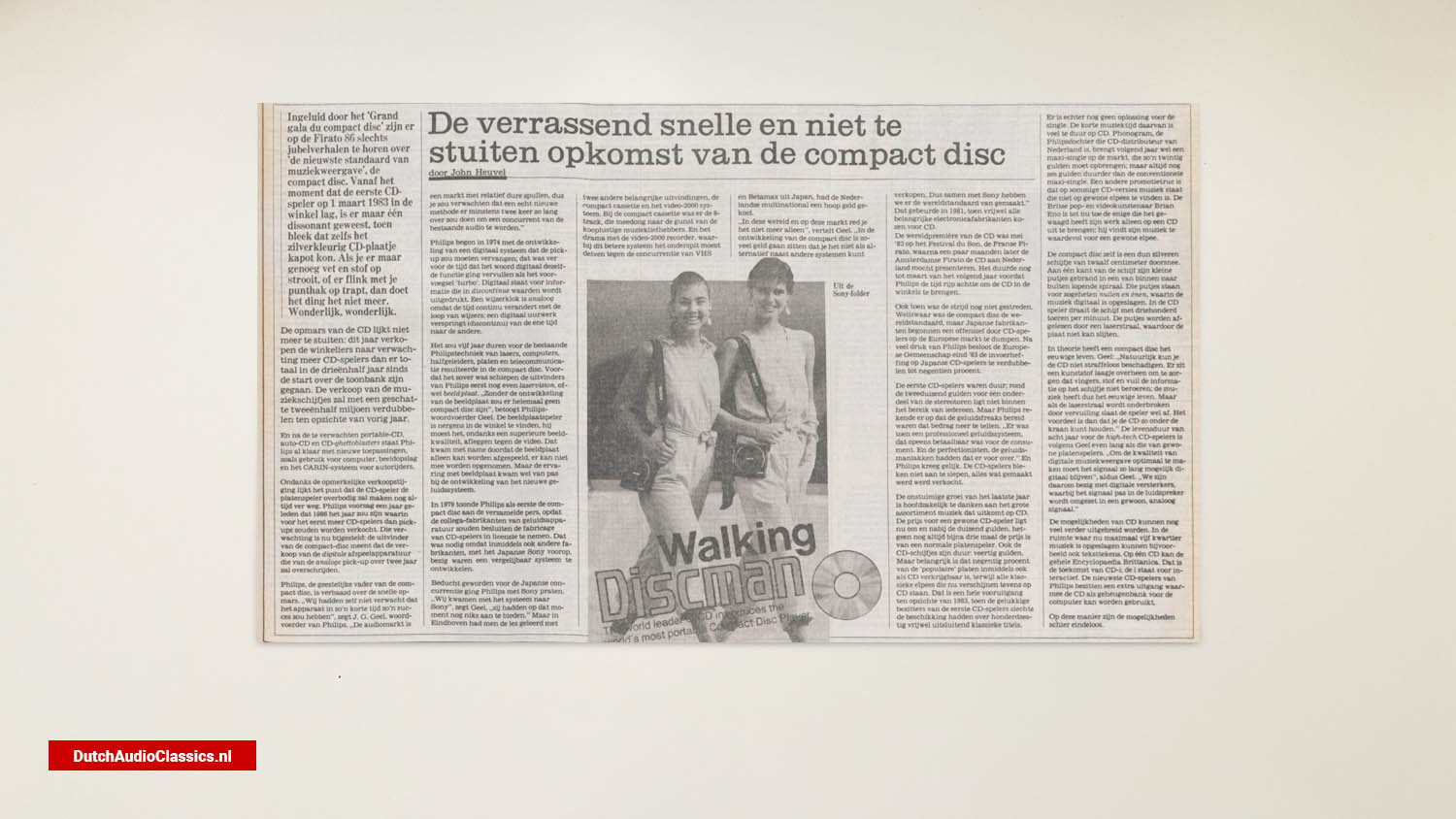