After years of talking and writing about it, the compact disc (CD) will be introduced to the market at the end of this year. Ten exhibitors will show their compact disc at Firato, while over thirty manufacturers will also come with playback equipment.

All have taken licenses on the equipment developed by Philips and Sony. The hi-fi enthusiast should not immediately put his turntables and records at the vulinis. As long as there are not a decentilik number of CD players in living rooms, ordinary records will be made; moreover, by no means all titles have been transferred to CD either.

But the pace will be increased in the near future: about two hundred compact disc titles will be available by the end of this year, and that number will almost double next year, Polygram, Philips' record company, has announced. Prices may still be an objection to switching to the new system. The compact disc will cost around forty guilders, the playback equipment between fifteen hundred and two thousand guilders.

The compact disc lives up to its name. The disc has a diameter of twelve centimeters and can contain up to an hour of music, much more than an ordinary album. Moreover, the CD does not need to be turned over because the hour of music is recorded on one side of the record.

The other side is reserved for information about the record, say the label. Another big advantage is that the record is indestructible. The system is based on digital recording and playback technology, where the music signal is recorded in the form of tiny pits, instead of the grooves of the ordinary record. These pits lie below the surface of the record, making them invulnerable to dust and damage. If a needle from an ordinary turntable can cause damage, this objection is also eliminated with the CD. The recording is read from below by a laser beam, which moves from the center to the outside of the record.

The manufacturers jubilantly conclude that the CD exceeds in sound quality everything that has been achieved so far. The sound recorded in the studio comes out of the speakers almost identically. The signal-to-noise ratio is considerably greater than ordinary equipment, channel separation is complete, rumble and whine are absent. Some manufacturers say that most speakers do not adequately reproduce that perfect sound, but that is a matter of trial and error.

No need to buy new speakers and amplifier equipment, the CD player can simply be connected to the equipment already in the living room. 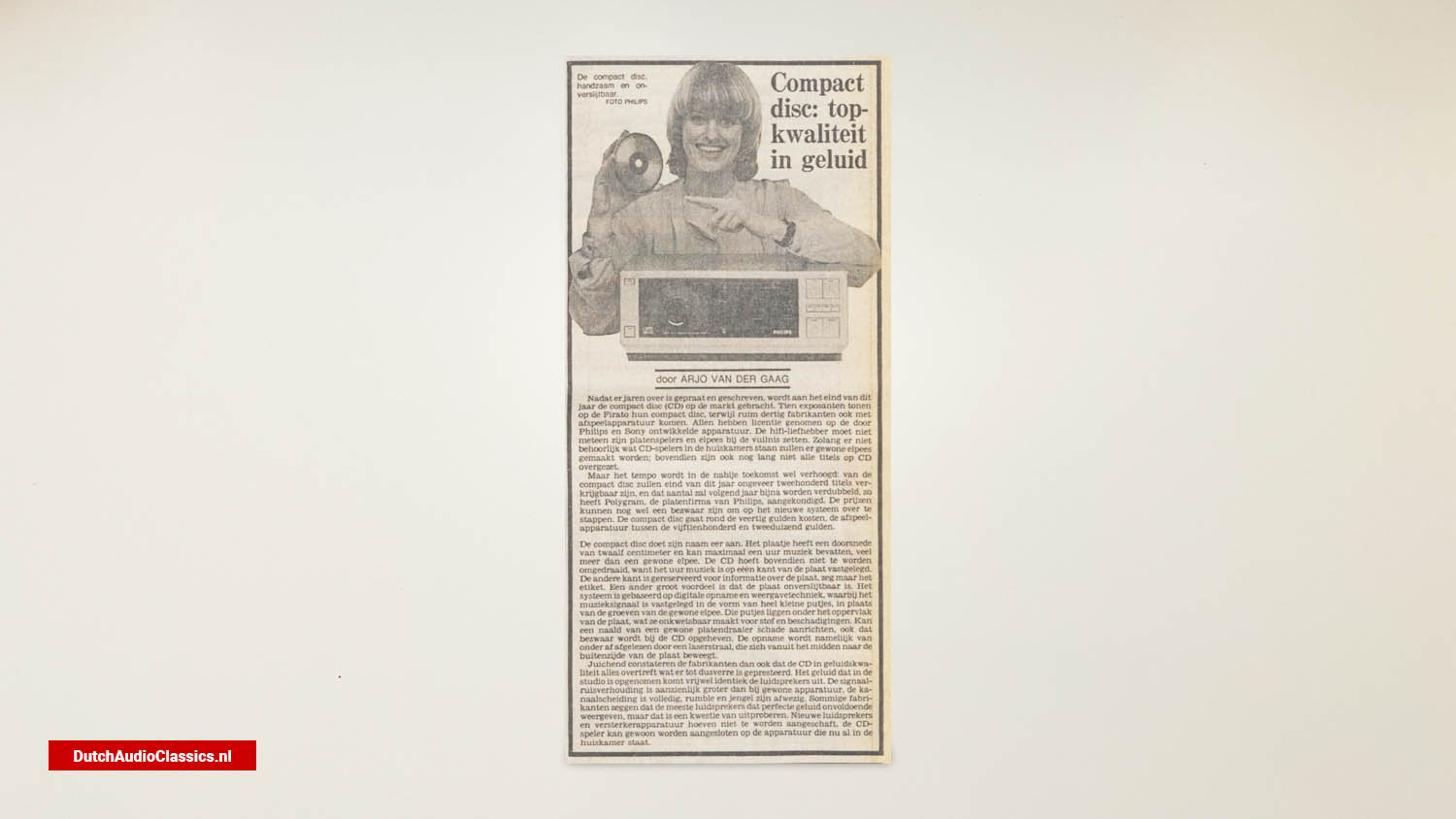