The year 1979 is one of the most important years in CD development history. World renowned Dutch electronics manufacturer Philips brought a prototype CD player to Japan to demonstrate it. The team from the Netherlands included Lou Ottens, technical director of the Philips Audio Industry Group, Joop Sinjou, also from the Audio Industry Group, and chief engineer Jacques Heemskerk. They visited each of the major manufacturers in turn. The intention was clear: Philips was thinking about proposing a new global standard and Japan, brimming with prominent electronic manufacturers, was the first target. 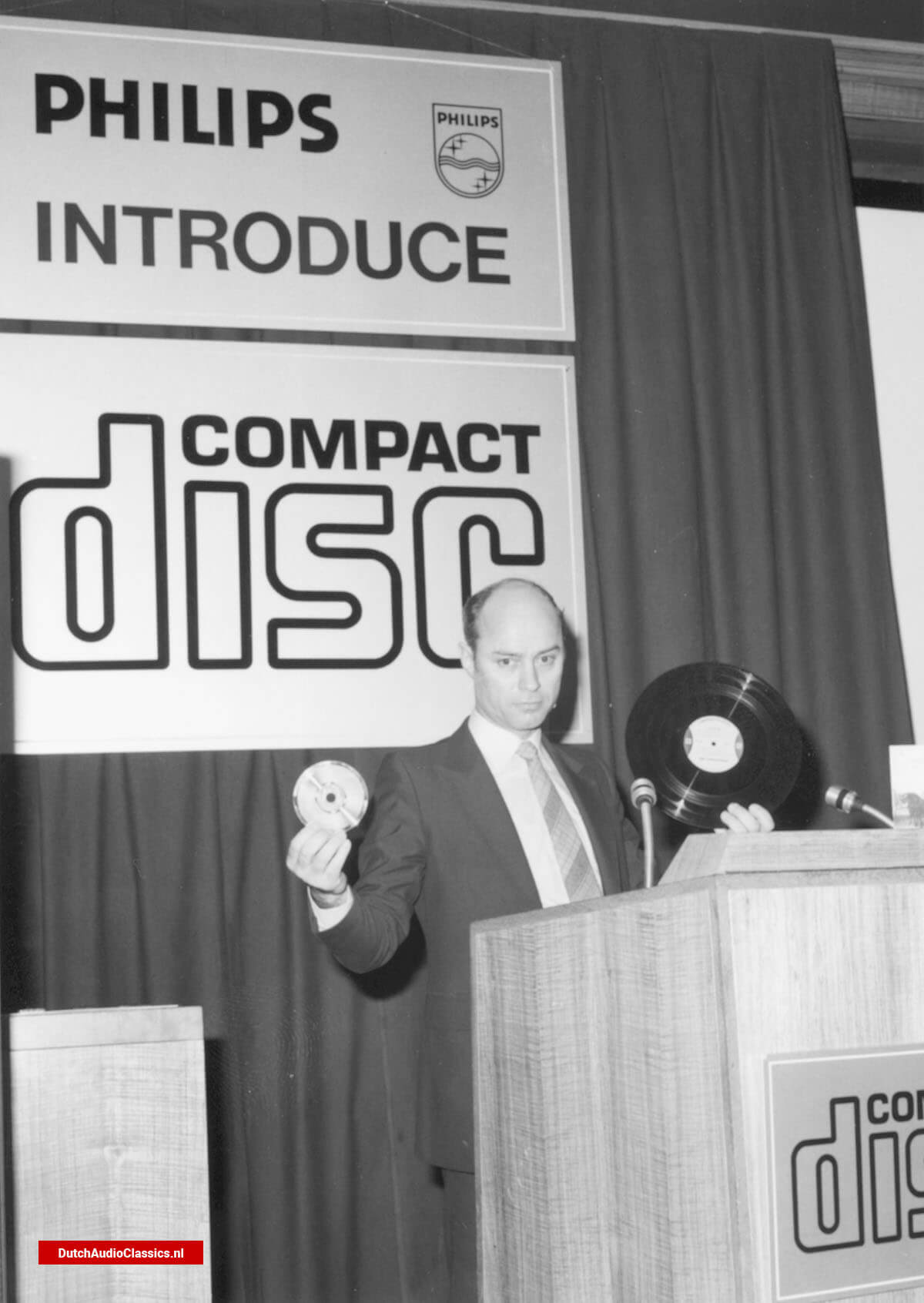 Joop Sinjou at the demonstration of the Compact Disc system, 8 March 1979

The prototype had a huge impact on Sony. Nakajima recalls, “We hadn’t even thought as far as a commercial product, but our eyes were opened and we were very impressed by Philips’ approach”. As mentioned previously, the reaction from most manufacturers other than Sony was to take a “wait and see” stance. This was because most Japanese manufacturers at the time were caught up in the appeal of the video disc and had disregarded the idea of commercializing an audio-only disc. Another reason for this reaction is that most manufacturers were developing contacttype signal reading technology and had little confidence in a contactless optical system.

Meanwhile, Sony had improved digital recording and error correction technology to achieve higher density recording and longer playing time and was now at the stage of having to define a specific product image. The question was how to market several hours of music software. At that point, the surprisingly good proposal came from Philips, and Sony leapt on board to resolve its own issues. With its “eyes opened” to Philips’ idea of a small scale, dedicated audio disc, Sony worked with Philips on standardization based on the Philips prototype. The company was quick to reach a consensus, and the Philips/Sony joint task force was formed in August 1979. 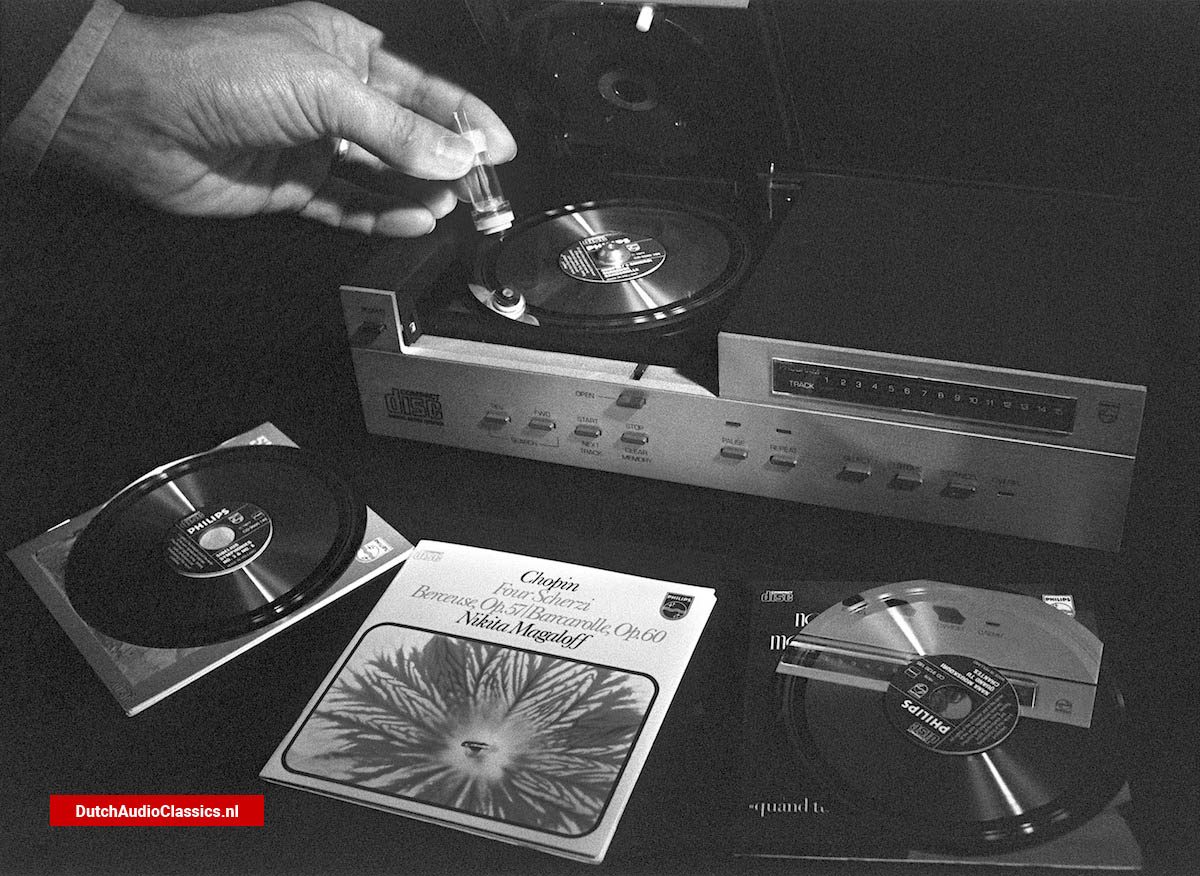 At the same time, Sony’s senior management was moving quickly. In April 1979, a month after Philips’ demonstration in Japan, Sony Vice President Ōga Norio met with W. Zaiss, Philips VLP division manager. Sony chairman Morita Akio met with Philips vice president Cor van der Klugt in May, while Sony president Iwama Kazuo visited PolyGram in Eindhoven and Hanover. This rapid succession of moves by senior executives was keen and agile, and deepening these bonds between business is thought to have been the greatest factor in the success of the CD.

The Philips prototype had the following specifications.

Other details, such as the recording density and error correction, are still under investigation and have not yet been published. Fig. 2-3-3 shows the Philips demonstration prototype. There was a considerable amount of digital circuitry under the table, but as advances were made in LSI, this all was made to fit inside the small sized player. Philips and Sony had been unable to negotiate to an agreement over household video cassette recorders and both had experience bitter failure. Now faced with shrinking music production, this made the bond between the two companies stronger and probably became the driving force behind the new-concept product, the CD-DA

With “eyes opened” by the compact disc product proposal from Philips, Sony had a rapid succession of questions and suggestions for Philips, confident in its decade of experience in digital audio technology. Despite the fact that it had its own music company, CBS Sony (with the power to resist a new format), it was less than a month after the demonstration that the company reached a consensus to base its technology on the optical format compact disc. This was the first time in the company’s history that a basic agreement on how to proceed had resulted from urgent meetings between senior managers. Based on that agreement, relevant staff from the two companies held a series of six meetings in Eindhoven (Netherlands) and Tokyo between August 1979 and June 1980 to establish specifications. Discussions between the companies began in Eindhoven and resulted in a basic agreement within six months. Within a year, a provision standards book, the so-called “Red Book”, had been put together. The negotiated outcomes between Sony and Philips were added into the detailed report (memorandum) by Mizushima Masahiro (Sony R & D manager). Mizushima was the only Sony representative present at all of the meetings. Since the senior managers of the companies had already agreed on the product concept, the necessary items to be discussed regarding digital audio disc specifications included: (1) the outer diameter, inner diameter, thickness and other physical characteristics of the disc; (2) playback length; (3) sampling frequency and quantization bit number; (4) modulation method; (5) error correction method; (6) standard laser frequency (780nm semiconductor laser).